Antoine is Not Here 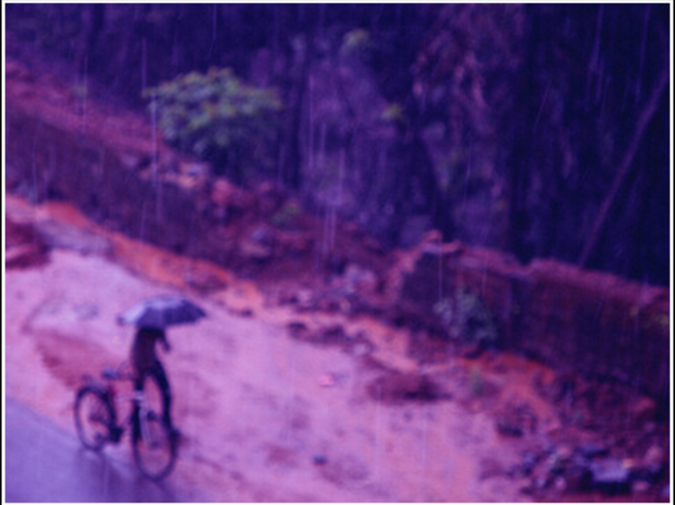 We'd survived the rope bridge, the dangling, the torn muscles in Miriam's shoulders. We'd survived and dusted off our luggage and laid our fine things in their cabinets. We held open the door on the sunset and watched leaves blow in the streeet. A Buick drove by, rattling, hinges buzzing. The nasturtium was finally blooming.

Awake under a twirling fan. A ticking clock.  An adrenalin dream. The ferry-man screaming “hundred dollars! Hundred dollars or no cross” and the rattle of automatic rifles on the hill.

In the glow of the empty refrigerator, I eat a pickle. I take a second pickle to the front stoop. The brine runs down my fist. I cup a hand under it to keep it from my clothes.

The moon is full, electric. The nasturtiums are silent in their little baskets, their broad round leaves, raised like open hands to the sky.

An airplane, preceded by cones of light, shifts across the sky, through fog and cloud. The idling car clunks into park.

The door opens. The bald head appears. The man adjusts his collar, bends over to look back into the Buick. He slams the door. He says, “Where's Antoine? You seen him?”

“No! I don't want any trouble with you people!”

I have seriously fucked up. These are not my lines. My line was, “Antoine is not here.” He's going to kill me now. The steam of hot death rises from my bowels, evacuates through my eyes. Acid in the throat, wetsalt in the ductwork. Why did I eat that pickle?

The man smiles. It's hard to say in this light, but his left eye may be made of glass.

“Antoine is not here.”

The code I bought from the ferryman must be incomplete.

“I don't know,” I say. A bat flies between us, reflects the moon briefly and disappears.

The man walks to me. He sits on the stoop with me.

A rumble of trains, more of the planes plow the clouds, a general feeling of silence in the low forgotten sounds. Inside, Miriam, loaded with morphine, sleeps.

We were only gone one day, I want to tell the man. We were only looking for a cheaper hotel! We didn't mean to learn anything. But, he expects that. With the cat this close, the mouse has got to be smart, has got to keep his mind right, has got to think things through.

I touch my face and realize, he's right. I'm crying. On the stoop of my home, in a t-shirt and boxer shorts, stinking of pickles, a guerrilla beside me, I'm crying.

“I don't know Antoine,” I tell him. “We just wanted a cheaper hotel.”

“Shh...” he says. He puts his arm around me. He's wearing Brut or Musk―something strong and alcoholic. His overcoat is heavy, real leather. It's way too hot for anything like that. “She'll be okay,” he says. “Don't worry so much.”

He wraps both arms around me and squeezes me tightly. A few of my air-suckingest sobs echo in the street.

“There,” he says after some time passes. “Sometimes you just gotta let it go.”

His embrace is warm and strong. I can feel his phone vibrate in his breast pocket.

“Hello,” he says. “Yeah. He's right here. Yes. For you,” he says, rubbing my back with a strong, circular motion.

Tom DeBeauchamp lives in Seattle. Until now, you knew nothing of his work.