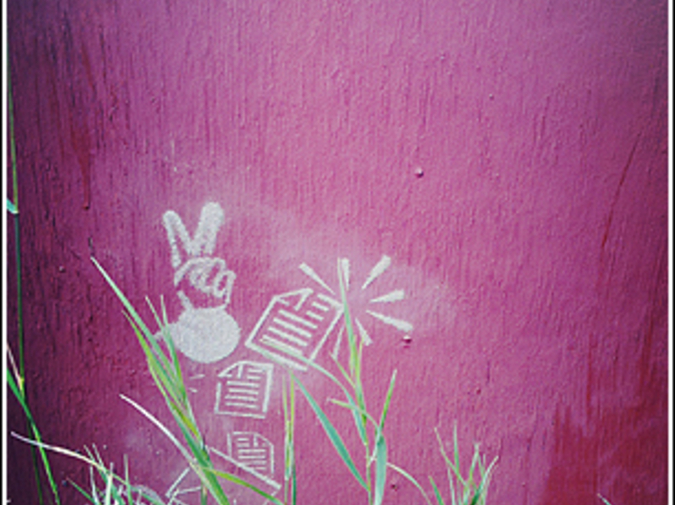 Perhaps Angela should have been surprised when she gave birth to a tiny black laptop. But she’d been restless and frustrated these past four days, confined to the couch as her husband lectured her about sitting down, relaxing, the pains of labor taking their sweet time to develop, her body and soul feeling ever farther from the routine of her steady work week. And so—there in the hospital, the birthing process finally finished, presented with a laptop and not a child—Angela felt only relief.

The doctor held the computer in his gloved hands, still connected by umbilical cord to its mother, and he choked out the words, “What did you do?” Angela’s husband pointed at the thing and started to say, “You bitch!” until he realized that it wasn’t human, that no amount of cheating with any man of any color could have produced a sleek Darth-Vader-black machine.

There were the inevitable shrieks and faintings in the birthing room, doctors and nurses passing through the door in a blur to offer explanations, to try to uncover what surely had to be a riddle. “How did this happen?” her husband asked. “The ultra-sounds didn’t...”

But when the doctor—perhaps out of habit—mistakenly passed the laptop to Angela, Angela refused to let go and surrender her child, its slippery plastic surface wrapped in a towel. She dabbed at its edges as if to clear morning crust from its eyes, tried to stretch the cap over what she believed to be its head. Someone reached for the baby and mentioned the word “tests,” and someone else said “observations,” but Angela said “No. I want to go home.” The laptop had no heartbeat, and when Angela held tight after they’d clamped the umbilical cord, they couldn’t justify taking it away and placing it into the nursery or into an incubator; Angela, in fact, appeared healthier than any other new mother the doctors had ever seen.

She tried to look disappointed with this turn of events, of course, but here was this living machine in her hands, and you could tell it was terrified with so many hands grabbing at it. Its green power light blinked rapidly and spastically, like the darting eyes of a dog cornered.

“I need time alone with him,” Angela said. “Please.”

When she was released from the hospital, there were phone calls from lawyers and journalists and talk show hosts. “There’s a message from TLC,” her husband mentioned, now excited. “They even have a name for the show. A.I. Angela’s Intelligence.”

“We aren’t a freak show,” Angela said. “We will deal with this.”

And although the phone calls and house visits were a nuisance, making it difficult for Angela to get caught up with the glut of emails and the ever-growing workload from her missed time at the office, it was in many ways easier than having an actual baby. Aside from the whir of its fan, the laptop made little noise. When they opened him up and pressed the power button, the screen simply turned to a milky white-gray, as if it did not yet have the ability to display text or image. So they shut it for most of the day, let it sleep. Plugged in, it had problem keeping warm, but sometimes she placed it atop a pillow and draped a blanket over its top.

At dinner Angela poured red wine for herself, enjoyed glass after glass, an indulgence from which she’d abstained through the duration of her pregnancy. Not a sip. She’d also created spreadsheets of everything she’d eaten, calories consumed, meat-to-vegetable ratios, vitamin intake, time spent indoors vs. outdoors, cardiovascular exercise, arm strength, target weights and waist sizes and flexibility. “I was so driven to be a perfect mother,” she said after the first sip of wine, and she plugged the laptop into the charger and placed it atop the high chair, “and you see where that got me.” She made a frowny face, but then looked at the laptop and smiled as if joking, brushed her hand across its plastic scalp.

“There’s a guy calling from Esquire,” her husband said. “Can you believe it?”

The laptop was growing, too, nothing noticeable from day to day, but while her husband was at the office Angela carefully measured its screen, pencil-sketched the dimensions onto the closet door. A full inch in Angela’s first boring week home. Another inch in the second week.

“This isn’t right,” her mother said when she came by. She tried to take back the crates of diapers she’d purchased from BJ’s. She wanted a refund if Angela wasn’t going to use them.

“It’s a he,” Angela said. “And he’s listening to every word his grandmother is saying.”

“How can you be serious about this? It’s no different than any of these things—these toys—we bought for your baby showers!”
But the laptop did seem to have eyes, or a single eye at least, that blinking green power light on its lip, no larger than a q-tip point, and wherever you went it seemed to follow.

“You’ve gone crazy,” her mother said. “You need to sue that hospital. They did something to you. They stole your real child. They put something into you. Why isn’t anyone asking the tough questions?”

But Angela would hear none of it. She locked her mother out of the house; she blocked her mother’s cell phone calls, her emails; she tore apart the sympathy cards from her in-laws; she curled up with her baby and watched recorded episodes of Dancing With the Stars, explaining the scoring system, why the audience booed Bruno when he gave the dancer a 6. “Someday you’ll know all of this,” Angela said to her baby, “and I won’t even have to explain it to you.”

At night, she slept on the couch and watched the green eye of the laptop. Her husband came out occasionally, asked her to come back to bed, for God’s sake, this is way too weird, and he was going to call back CBS if she didn’t get hold of herself.

But she announced the next morning that she was going back to work.

Her husband stammered, started several sentences but could not finish any of them. It all seemed to be anger without direction. He’d wanted a boy, a live boy that would be tall and assertive and entrepreneurial, a basketball player too, he hoped. Of all the ways he’d imagined he could be disappointed—a girl, a boy who liked the Red Sox or who wanted to play lacrosse or was gay—this was not one of them.

But this was another benefit, Angela explained. No daycare necessary. She could take her child to work; she could take him anywhere she needed to go. No fuss. She simply fit the laptop into her purse, checked him every few minutes to make sure the eye wasn’t blinking its discomfort. He could breathe, right? Did he feel suffocated down there, amid the chapstick and lip gloss and keys and old recipes? She talked into her purse while she rode the subway and few took notice (though everyone grew uncomfortable when a troop of real children boarded the train on a field trip and began asking what the graffiti meant, why was that man so smelly, can I take this gum from the seat?). When she arrived at her office, she set the laptop on her work desk, let him sleep while she checked her emails and her Outlook appointments on her work computer.

But the eye flickered, like a child shifting his weight, bored at the grocery store.

“Okay, okay,” Angela said. She opened him up, and the screen beamed bright white. “Hmm,” she said. She faced the laptop toward the monitor of her computer. “Okay,” she said. “This is an email. This is how I talk to my colleagues. I type messages. Oh,” she said, “and this is a spreadsheet. You see how I enter a new number?”

The laptop’s white screen was sharpening, images and text appearing.

“Ahh, you’re learning,” Angela said, and she thought “This is motherhood.”

Her co-workers watched at a distance, pointing and whispering, but weren’t they the same ones who had complained to her of long Saturdays at the soccer fields, of ungodly-loud instruments in the house, of Barbies in the cracks of couches, SpongeBobs in the toilet, Legos in the dog’s food bowl? Welcome to hell, isn’t that what Daniel had said when Angela first announced her pregnancy? And now look at her. Her own child would be smarter than any of theirs, couldn’t they see that? There were only lines and dots on the screen now, but in a few years? What if her child was wireless? Ask him a question, and he’d google an answer like that. This was what they wanted, wasn’t it? Oh, just admit it.

At the end of the workday, while her colleagues still toiled on projects and checked the clock and lamented that they might not leave until 7 or 8, Angela packed her child in her purse and waved goodbye. She would teach him Outlook, she decided. She would tickle him when she got home, her fingers against his keyboard. They would play all night, even while he charged, the world dark around them, his white screen etched with sharper and sharper detail. This would be their life, and it was everything Angela could have hoped for.

Nathan Holic has taken a three-week break from drinking Diet Coke, and in that time, twelve new colors have appeared to him. Of course, his serialized graphic novel "Clutter" (available online at Smalldoggies Magazine) is still in black and white, but if he hits the one-month mark, maybe he'll realize it's in color.