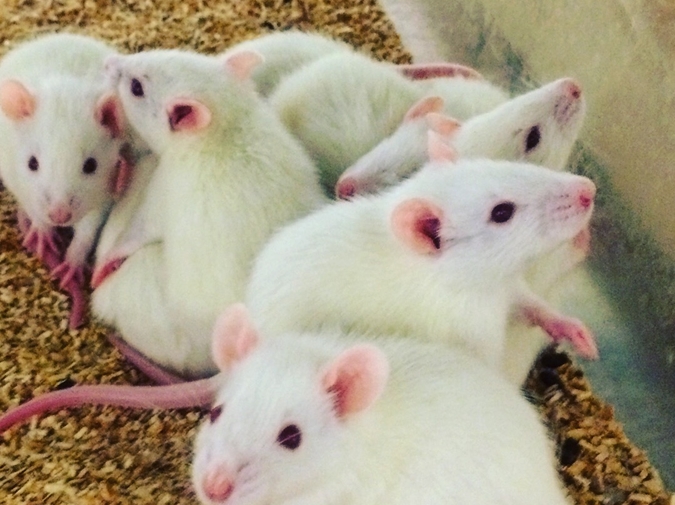 During my first year of grad school, I learn how to kill rats. I work in a lab studying time perception, a cognitive function that’s not fully understood. We have to train new rats for every study. Get rid of the old who have already been conditioned for a specific experiment, responding to a flash of light after a set amount of time. We use Euthasol to kill them. Or rather, I use Euthasol. Dr. Matell – like most researchers that use rats – has an allergy to them.

So, I kill rats alone. Pick the first rat out of the shared cage. Weigh him and fill the syringe with Euthasol in preparation. Place him in the plastic bowl and cover with its clear dome, turn the knob on the tank which pumps isoflurane through a thick tube and into the bowl.

The rat scrambles around, sharp little nails against the yellowed plastic, until the gas hits his brain and he sleeps. I push away my jealousy, watching him slip into unconsciousness so easily. Scoop him up, first finger and thumb under his armpits, and inject him between the white-furred belly and left hip. Switch out the rats, the second one much more panicked. He knows, instinctively, to be afraid. Feels it in his gut.

I do the same thing with him and wait for them both to die. Wait longer. Pinch their feet – hard – when they appear to stop breathing. To double check.

I lift them by the almost scaly, pink tail – one by one – into a medium hazard bag. Red with big, black lettering. Twist and knot it. They go into the freezer in the basement that slowly fills up over the course of the year.

Sometimes, I have to kill whole sets of rats. There are larger hazard bags that can hold up to ten bodies. Each with a pair of unblinking red eyes. A mass furry grave that I shove into the freezer against more rigid bodies. Make it fit.

One night after class, my friend Adam is driving me home. He asks me if I’m feeling okay. I’m open about my depression with him. We’re studying psychology after all. I say I’m mostly fine today. A little tired.

But that’s not what he means. He thinks I have a cold.

He glances away from the road for a second to look at me. Streetlights flashing as we pass. “It’s hard to tell?”

“Yeah. Whenever I feel bad, I assume it’s the depression.”

Later, he helps me realize that my constant cold is actually the rat allergy, something most scientists develop over years of working with them. I got unlucky.

It bothers Adam when I don’t know how to feel. When I don’t realize something’s wrong. When my stomach forgets to tell me to eat. But it’s hard to attribute individual feelings to individual ailments or individual parts. This is just a body I occupy. Illnesses happen to it. I see through its eyes. It kills things.

Once, when I was a child, my mother smelled a rat.

She couldn’t decide, but there was a definite smell in the kitchen. Something dead. Rotting.

No one else could smell it.

It took more than 24 hours for her to narrow her range to somewhere around the fridge. We looked under it, around it, even pulled out a chair to look on top. Almost a game. But no prize appeared.

It took another day for the rest of the family to smell it, for my dad to actually move the refrigerator. There. A dead mouse.

My mother, proud as she was to be right, still shrieked. An instinct.

I continue working in the lab, collecting the meager stipend. I learn how to perform surgeries on the rats, implanting a thumb-sized telemetry unit into their guts. To record their temperature and heartrate while we test their conditioning.

Dr. Matell tells me I’m good at it. That I have a steady hand. But the inside of a body is a terrible thing. It’s not meant to be seen from the outside. Intestines are a fragile network of life that do not survive the nick of a scalpel. Pink and essential.

I check – more than twice – that the rats are asleep before I slice open their abdomens, waiting until neither of us feels a thing.

Emma Brousseau earned her MA in English/Creative Writing at Texas Tech University. She previously attended a graduate program in experimental psychology which informs the scientific and speculative aspects of her work. You can find her on Twitter @Emma_Brousseau or at emmabrousseau.com.