An Interview with Michael Kimball 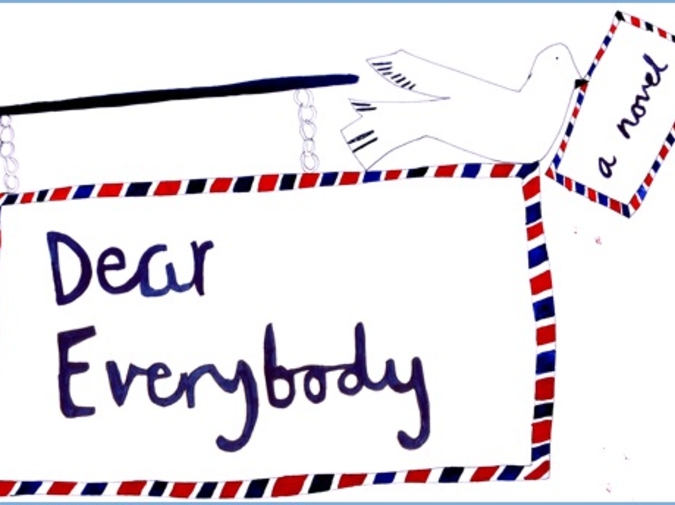 There is much to admire in the life and work of the author Michael Kimball: his sentence craft, his innovation, his generosity and enthusiasm. He's also a quite a thoughtful interview subject.

His latest novel Dear Everybody is about a weatherman who commits suicide, and it is heart-achingly good. It's also formally challenging, built out of a series of letters from the deceased, footnotes from his brother, new stories, lists. In the hands of many other writers, it would've emerged a huge, unwieldy mess. But Kimball makes it work. I talked to him about how he pulled it off.


Which came first, the suicide or the suicide letter? That is to say, the content of the story, or an interest in writing in the epistolary form?


The novel started with a letter, just one short letter, a man apologizing to a woman for standing her up, a date they were supposed to have gone out on, and the man is wondering if they had gone out that night, if they might have had a happy life, if maybe his whole life would have been better if he had met her that night. I didn't know then who was speaking or that it was a suicide letter, but I did have a voice, a way of speaking, and a way of thinking. That one letter led to a rush of about 100 letters—Jonathon apologizing to nearly everybody he has ever known—that were written in a couple of weeks. It wasn't until I had that big first batch of letters that the content of Dear Everybody began to reveal itself.

So, then, there was a moment when you realized that this person, this letter writer, had committed suicide? What was that moment like?


I try not to know where the story of the novel is going. I try to hide this knowledge from myself for as long as I can when I am writing something, but, yes, there was a point when it became clear why Jonathon was writing these letters to everybody, that he was committing suicide. It was a little frustrating and also sad. I didn't want it to happen, but it seemed inevitable. Even as the author, I felt as if I had no control over this.

But, then, you as an author clearly do have control. Which begs the question: how do you, or how does a writer, learn to give up that kind of control. How does a writer learn to do what is good for the story, instead of following one's instinct to, say in this case, give the character a moment of redemption that pulls him out of his fate? How do you keep from breaking breaking out the paddles and shocking the heart back to life? How do you keep from parachuting someone in to save Jonathan?


Yes, of course, I could have written a different ending. And I considered different endings. But none of them conveyed the amount of feeling, had the emotional impact, that the suicide did. Every other ending seemed less of an ending. And besides that, it seemed to me that Jonathon only writes the letters if he has reached his end, if there is no other alternative.

I just finished another epistolary novel called Dear American Airlines. That book is a single, long, ranting letter. Dear Everybody's letters are many and brief. Why?


I hadn't heard about Dear American Airlines, but I'm glad to hear that the epistolary novel is making a comeback after a few hundred years. At one point, Dear Everybody was just the letters, that one voice, though they were addressed to a few hundred different people. I liked the way that the novel accumulated out of all those short pieces, the way Jonathon told his life story in relation to everybody he had ever known, the way that each relationship could be distilled to certain defining moments. Besides that, I was trying to cut all of the unnecessary stuff out of the novel, all of the unnecessary character description and scene setting, all of the connecting business that so many novels include, and the short letters gave me a way to do that.

Why do you think you were interested in trying to create a novel as...what do we call it? Minimalist? Precise? Bare-bones? Yes, two questions here. What shall we call this aesthetic, and why are you attracted to it?

And who do you think of as the precedents, the aesthetic grandparents of the book?


The aesthetic grandparents, I don't know that there is a direct line, but I have always liked the way that David Markson's late novels accumulate in their line-by-line way (each line separated by a line space). And Stanley G. Crawford's Some Instructions is unavoidable (though his Log of the S.S. The Mrs. Unguentine is his greatest book). Michael Ondaatje's Coming Through Slaughter has always been an important book for me—for the way he uses all those different elements to tell the story of Buddy Bolden, and for the ways that music structures that book. And, of course, there is the exuberance and strangeness of Joe Wenderoth's Letters to Wendy's.

This may sound like a silly question, but did you learn anything writing the book? Anything process-wise? Any unexpected emotional discovery? Anything about storytelling that you have carried with you to what you are doing now?


I have learned different things about writing from writing each novel. The process with Dear Everybody was very different from the process with my first two novels. With Dear Everybody, the first drafts of letters and other pieces were often written in a kind of rush—something that had never happened to me before—and I learned to harness that a bit, which has carried over to the new novel I've been working on—the working title of which is Friday, Saturday, Sunday. I also learned lots of little writerly things—new ways to get from one sentence to another sentence, different ways to set different material next to each other. And I learned a lot from the construction and organization of Dear Everybody, ways to keep multiple threads in play, ways to let story and feeling accumulate. As to emotional discovery, there were many, as you may have guessed. Jonathon Bender is not Michael Kimball, but I stole a lot from my own life. I mined the details of my own life in a way that I have not for any other novel. But the emotional discovery came with trying to process something like my relation to my father (which was, in fact, difficult). It was unavoidable, but it was a kind of release.

To step a little bit away from craft with a question, could you tell me whether or not you felt—or think any writer—should feel some sort of responsibility when fictionalizing a subject like suicide?


I don't know if a writer should, but I did. There were different versions of Dear Everybody that had suicide hotline phone numbers, real ones, along with guidelines for what to do should the situation occur with somebody close to you. It's terrifying and sickening to be in a situation where somebody close to considers suicide, attempts suicide, or commits suicide. In the end, with the novel, I did my best to handle the material with as much care as I could.

[This question came about a month after the last, and a week or so after David Foster Wallace was found to have committed suicide.] During a lull in this interview, a rather famous writer took his own life. You, during the writing of Dear Everybody, inhabited this peculiar, tragic, to some completely incomprehensible, to others very familiar mindset. Did it give you any perspective on the situation?


I think it's important to note that the mindset I inhabited during the writing of Dear Everybody was that of a fiction writer. I was writing in the voice of and about a man who was struggling with major depressive disorder. I was not, myself, experiencing, major depressive order. That said, depression is a terrible thing with which to struggle; it is physical, emotional, chemical, unsocial and in almost all the wrong ways. It can be irrational and, as you say, incomprehensible. It is a real illness, even if it doesn't always look that way from the outside. It can be difficult for other people to understand. It can be desperate and hopeless. It isn't any one thing. There can be a trigger for an episode, but there are so many factors that are involved. And, yes, it can be tragic. I wish that David Foster Wallace would have kept taking his medication (I read that he had stopped) and I wish that he wouldn't have killed himself. I wish that, instead, he would have written another book.


Find out more about Kimball at michael-kimball.com.

Kimball writes your life on a post card here.

Kimball and Luca Dipierro made a movie called I WILL SMASH YOU. The trailer is here).

Matthew Simmons is the Hobart interviews editor. He is also the Man Who Couldn't Blog.