An Interview with Justin Taylor 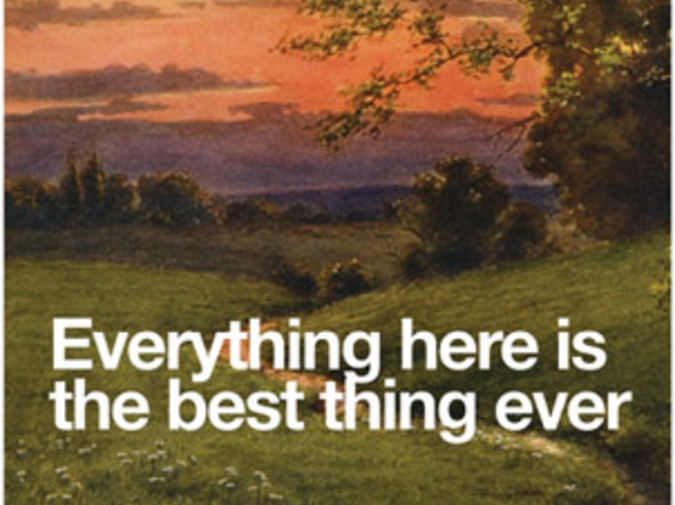 Is the world ending? Do you know something I don't?

I'm not sure what I know that you don't, but certainly nothing in re this. And yes, the world is absolutely ending. It's just a question of how quickly, and from what.

I must apologize if you touched on this in The Apocalypse Reader, but why the apocalypse? Were you raised in an apocalyptically minded home? Of one of the religious, environmental, imminent nuclear conflict, 2012 is the end of the Mayan calendar varieties? Or the, "Oh, fuck, that actor is president?!?!" variety?

No, definitely not. I come from practical, secular Jewish stock; no fanaticisms to speak of. I started getting interested in Apocalypse when I took a class on the subject as an undergraduate—or maybe I was already interested in it and so I took the class. Or maybe you could argue that my interest in it grew out of my interest in religion--which was and still is fairly intense, and first came on around the time I moved out of my parents' house, and who knows maybe that was some kind of weird reaction to having been raised in such a thoroughly secular household. But that's a better question for my shrink than for me to try and answer, and since I don't have a shrink, I guess it'll have to just stand. In any case, that was where I first encountered the idea not merely as an idea, but as a possible object of study and consideration. It was a really great course, and then I wrote my undergraduate thesis on Lovecraft and Apocalypse. I just sort of "kept up" with Apocalypse stuff--reading about it, writing Apocalypse stories, etc. At one point I was working on a themed collection of Apocalypse stories—I think the only one of those that survived is "Tetris," which is in my book, but people who knew me just before and then during grad school were subjected to any number of them. That project failed, obviously, but out of the, um, ashes of it I developed this idea that while no writer should write Apocalypse all the time, probably every writer wants to do it at least once. Luckily by this time I had moved to New York and made some contacts in the writing and publishing world, so I was able to rally some support, get some names attached to the project, and Thunder's Mouth decided to let me test my theory. Happily, it turned out I was right. Pretty much every writer does have an Apocalypse story—either one they've written, or one they've always wanted to write.

There's an interesting contrast between Jewish eschatology and Christian—especially that very contemporary American Fundamentalist Christian—eschatology. The first suggests an individual will come along and bring the world together in peace, abolishing death and making the land fruitful. The second concerns the exclusive salvation of a small group of people and a thousand years of war and strife.

Is the second sexier, maybe? More satisfying in a narrative sense? (It certainly seems to be more commercially viable—Left Behind, mega-churches, atheists who have agreed to take care of the pets of the faithful when the Rapture comes, bumper stickers.) Apocalypse is just a revelation of the hidden. What's with the burning and the destruction do you think?

Well, Jews also hold to the notion of a Messiah. It's really just a question of whether we're waiting for Him to come a first or a second time. Jews await an Arrival, whereas Christians anticipate a Return. And yeah, there's something very compelling about the Christian narrative of Apocalypse--it's very rich, and filled with amazing stories and ideas and contradictions. It's a work of profound excess, which ought to be celebrated—I'm talking about the whole Christian thing here, not just Revelation. As to what's been done with it, well, as usual, that's something else again. Kierkegaard and Nietzsche agreed on at least one thing, which is that there has only been one true Christian in history, and his name was Jesus Christ. As far as the Left Behind and that whole ilk are concerned, I'd just as soon not discuss them. They're a strange combination of the desperate, the cynical, and the deeply bigoted. The books they produce are septic tanks of bad theology, nihilistic politics, and terrible art. As compelling and vibrant as I find Christian theology and mysticism (including but not limited to their sense of End Times) I find the whole Joel Osteen/Tim LaHaye/Sarah Palin thing equally uninteresting. Their holy trinity is Ignorance, Money and Power. They're relevant only to the extent that they are hurting a lot of innocent people pretty much all the time, and these days in particular for their advocacy of domestic terrorism. Their eschatology has all the integrity and depth of a mid-period Jean-Claude van Damme movie, and it changes based on whatever they're selling, who they're trying to get you to lynch.

Do you think that humanity deserves an apocalypse even if one is really not in the offing? As popular a notion as it is, it's—to my mind—unlikely that God will come and destroy us all. But don't we deserve it? And not because we are fallen and deserve the punishment. I mean simply that we seem, as a species, so tied to the idea of the narrative arc, that to not have an apocalypse will simply be a huge disappointment.

Well, I don't believe in a God with a sense of retributive justice so it's kind of hard to figure the question in terms of "deserving," because the notion of determining deserving and then administering what's deserved both rest on a premise that I don't accept. Of course, if I could accept that premise—of a kind of mad-dog, vengeance-bent, Jonathan Edwards God—then yeah, sure, we absolutely have it coming. But what that would mean is that every moment our deserved punishment is withheld is evidence of God's mercy extended. Another way to think about this is in terms of Kafka's parable of the Messiah, who will come "only when he is no longer necessary, not on the last day, but on the very last." I'm not sure that the Messiah will ever be unnecessary, which in this formulation is another way of saying that the Messiah is never going to come, which in turn suggests that while there may yet be last days, there will be no very last ones. 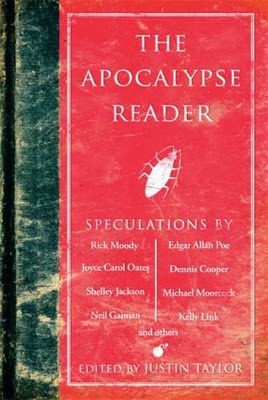 One way of explaining the death of an elderly person to a child is to say that the person who has died has "had their turn" living, and must now make room for new people to live—that very child, in fact, though you don't typically tell them that last part—you don't want the child to see a direct causal link between their life and the elderly person's death. Since there isn't room and resources for everyone to live indefinitely at once, we queue up like waiting to ride a roller coaster. I guess if you believe in reincarnation you believe that we can ride the ride over and over (though weirdly you then also believe that we shouldn't want to); if you're in an afterlife-oriented religion then you believe that the person has finished the ride, left the park, and quite literally Gone Home. But I also suppose it works without a religious dimension—everybody gets one trip through, period, end of story, no postscript. I'm not sure if I'm answering the question, but I really am trying to think it through.

The trick—and I think I'm still not really answering your question--is to try and imagine some sort of affirmative apocalypse that doesn't require letting go of the perspective which privileges the human, which doesn't denigrate it. But this question of deserving is a very difficult one, especially without the presence a conscious, activist God of some kind. I think you wind up spewing a lot of mumbo-jumbo—sub-Kafkan koans and dormroom bullshit. I mean I could argue that very little of what is truly deserved makes sense to us, because we fail to perceive or comprehend the administrative apparatus that is doing the accounting, and then delivering the punishments and rewards that comprise the events of a life, the fate of a nation or a species, etc. I could also argue, in a fit of nihilism as deft and superficial as a rock skipping across a lake, that the undeserved is what is truly deserved--that we deserve utterly the excess, the randomness, the brutality, the startle of something that we do not deserve at all. The exception is the only rule which will suffice! The only law is the transgression of the law!

But this is merely an attempt to compound my stoner profundity with some kind of puckish angst, laced with just enough melancholy to stir the emotions of someone who already admires this line of thinking—which tells me that we have definitely slipped out of the realm of even the sub-Kafkan; we are located squarely in the dormroom now, simply because I wouldn't turn myself inside out like this unless I was trying to impress the girl sitting on the opposite bed. And what's worse, in my shameless pursuit of this goal I've descended into self-parody, badly quoting a line from one of my own short stories. The part of me which observes myself in action is at this point almost rooting against me and for the girl. On the other hand, who am I to get between her and what she's got coming? And furthermore, who knows what she might have done to deserve me? I imagine it must have been very, very good and/or bad.

If you had the inclination to destroy the world and were somehow granted the ability to do so, how would you do it?

Probably like Willow at the end of Buffy the Vampire Slayer, season six. The sudden death of my lover would cause me such deep trauma that I would no longer be able to see any good in the world, and would therefore put the full force of my nearly limitless magical powers to destroying it. Of course, she ends up not being able to go through with it, because her best friend reminds her of when they were kids together, and they're on some beach and her eyes are black or else made of lightning—I like the eyes-made-of-lightning part, assuming I didn't make it up. But what am I saying? That my own best friend probably couldn't or wouldn't talk me down from starting the Apocalypse like Xander does for Willow? Or am I saying that this is a good scenario because I wouldn't have to go through with it because my friend WOULD actually talk me out of it? The beach is a good place for the end of the world, anyway. And what about Michelle Trachtenberg? She was stuck in a cave with Buffy and I think they were fighting mud men for some reason. If it were my Apocalypse, and I really had to go through with it, I would want Michelle Trachtenberg there on that beach with me.

Justin Taylor is the editor ofThe Apocalypse Reader(Thunder’s Mouth, 2007), andCome Back, Donald Barthelme (McSweeney’s 2007). His own books include a poetry collection, More Perfect Depictions of Noise(X-ing Books, 2008) and a short story collection,Everything Here is the Best Thing Ever (Harper Perennial, 2010). With Jeremy Schmall he co-edits The Agriculture Reader, a limited-edition arts annual. He lives in Brooklyn.http://www.justindtaylor.net

Matthew Simmons is the author of the novella, A Jello Horse. He will publish a chapbook (The Moon Tonight Feels My Revenge) and a story collection (Happy Rock)in 2010 and 2011, both with Keyhole Press. More at matthewjsimmons.com.