An Interview With: Jennifer Tamayo 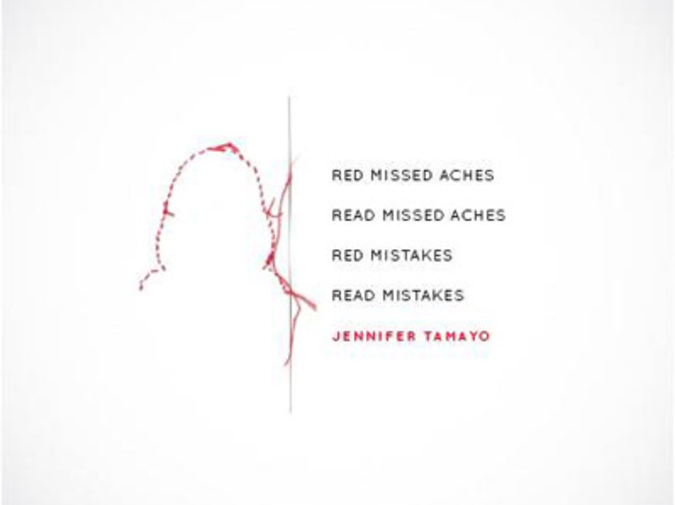 Having had the pleasure of hanging out with Jennifer Tamayo on a number of occasions, including at a mardi gras parade and at a Busdriver/Abstract Rude concert under a Louisiana interstate, I knew her debut collection of poetry would demonstrate an abundance of energy, thoughtful humor, and a formidable intellect that sneaks up on you but never calls attention to itself. I also knew it would be a shitload of fun. And it is all of those things. What I did not count on however was a complete dismantling of what a poetry collection can be. The full title is Red Missed Aches Read Missed Aches Red Mistakes Read Mistake and it won the prestigious 2010 Gatewood Prize, judged by Cathy Park Hong. The book includes—but never attempts tocontain—photography, autobiography, illustration, and an altogether healthy disrespect for tradition. It moves between words and images—and words as images—as neatly as between Spanish and English, transforming both of sides of those equations. It’s weird and brilliant and altogether charming, again, like J.T. herself. She was nice enough to answer a few questions via email over a few weeks in October and November.

Congratulations on winning the 2010 Gatewood Prize. Reading [Red Missed Aches] made me very happy. How does it feel to have this beautiful book in print?

Having your first book published feels a little bit thrilling and a little bit terrifying—and then a bunch of things in between. I’ve said this a few times, but I was unsure if [Red Missed Aches]would ever get published, mostly because of the commitment it would need from a press. So when Switchback Books selected the manuscript, I was full of exclamation marks and expletives. Before calling anyone, I went to my nearest cake store and had two slices by myself. It was an awesome excuse for a lot of cake.

On the other hand, it was also like I was suddenly going to give birth to a weirdo baby. For months leading up to publication, I was walking up with nightmares and stomach pains. I had written this thing that felt liked it would only exist in the hands of a few friends and soon it would be out in the world, and I would be responsible for it. I was also terrified of how it would be received, especially by my family; the obvious narrative of the book is about immigration and documentation and there’s a very specific silence around these things in some communities having to do with shame but also practicality.

My weirdo baby has been in good hands with Switchback. I have to write out the names of my editors in caps to cover it in a virtual glitter: **HANNA ANDREWS** BECCA KLAVER** BRANDI HOMAN**WHITNEY HOLMES**. Their production of [Red Missed Aches] makes me incredibly proud and grateful.


The recurring image of your face sewn with red thread onto a painting of the Virgin Mary speaks to a number of themes in the book: motherhood, transposition, memory, disorientation. I could go on, but, instead, would you say something about what the book is not about?

Oh my! What a fun and terrible question. One thing the book is certainly not:

A “retrospective prose narrative written by a real person, concerning his own existence, where the focus is his individual life, in particular the story of his personality” —Philip LeJeune in “The Autobiographical Pact.”

I’m hesitant to respond to this question, mainly because I’m all for instability, contradiction, circularity, puncturing—anything that will lead to cracks in the text. The mistake/the missed take allows (demands?) for multiple and, often, opposing readings—and I fell in love with that—especially when it came to writing autobiography, the genre of “straight-from-the-horse’s-mouth” the genre of desired exactitude and reality. Yet, this becomes even more complicated in the light of the immigrant body, whose identity has become so readily mutable. Who gets to define who?

In the context of the LeJeune quote, I kept this posted near my writing space and thought, let’s rip this definition to shreds—in other words, why is the autobiographical writing often so dry or why is it that writers resist calling their books autobiographies? Is it an allegiance to a reality or the genre?


What are the things here that photography alone can’t accomplish but words can, and vice versa? How did the mash-up come about?

My relationship to photographs/photography is a teenage, emotional landmine.

The idea for this book started as an ekphrastic exercise of photographs in my life and how I could use them as a sort of biographical/imaginary map. Aside from the role documents and photographs play in an immigrant experience, I remembered how as a little girl I used to keep a Polaroid of my then 80’s-chic mother and father under my pillow. (Is that sad or gross?) Fresh in love, they looked terrified of the world. Even as a kid, though, I had a really keen sense of the importance of this thing. I lost the photo years ago, but the aura around the object lives in me.

So, I got to grad school and thought I’d make up some poems about these people in the photographs and pretend they were my life—a sort of revisionist history? The work that came out was clean and strong and beautiful. And then I realized how fucked up that urge was—and how much more it needed to be fucked with.

Magritte instructs, “Ceci n’est pas une pipe.” Similarly, I wanted a spacial interplay between photographs and words in which they contaminate each other and, as a result, the visual and aural senses in the body (your body!) My “captions” would play dirty, and I couldn’t do this without the photographs or the words acting in collusion. Perhaps photographs and text can work independently, but this book was a buddy-cop thing.


Can you say a little bit more about your inspirations—poetical and otherwise—and what you’re reading now?

I have a weak heart. As much as I like poetry, I have a sick affinity for pretty pictures; Ohbayashi’s House has been in my head for a while, as have the works of Ana Mendieta and Yayoi Kusama.

When I was writing [red missed aches], I had a few BFF’s on the table. Theresa Hak Kyung Cha’s Dictee was my main spiritual guide. I wanted my text to have a similarly “alien” feeling to it in which the writing and images simultaneously turned you on and turned you off. I also borrowed heavily from her structure and syntax to get me through the language. A couple of others were referenced more generally for courage; Lyn Hejinian’s My Life, Roland Barthes’s La Chambre claire, and Bhanu Kapil’s Incubation: A Space for Monsters were some of these. In addition to redefining autobiographical writing, there was a vulnerability to their artistic gestures that was important to my writing.

Similarly, the book had a strong interest in visually re-figuring the female body. I used two films as major sources: Kieslowski’s The Double Life of Veronique and Deren’s Meshes of the Afternoon. These films deal with various fragmenting and splinterings that result in a really interesting take on “self-discovery.” More specifically, the film’s heroines experience the connections between sexual pleasure and identity as they relate to artistic mania; I wanted to experience that too.

Right now, I’m reading Blake Bulter’s There is No Year, The Selected Writings of Kathy Acker, (gawwwwarhg!) and just finished re-reading our up-coming Futurepoem book, Jon Leon’s The Malady of the Century.


What are you working on now? What’s next?

Though I’m performing and writing a lot, I’m not sure what I’m working on at the moment. I like to work in a black hole where I write and write and write for a good while and later, after what feels like forever, I take a closer look. (Hopefully) I’ll start to see something taking shape. Briefly, my new project addresses the following: desire, the lunar cycle, Harriet Tubman, love affairs/affairs of all sorts, the epistolary form, abolitionism, puppetry, watching people work, and collage. I’m in the gelatinous stages.

Recently, I’ve been working on series of video adaptations of poems from [red missed aches]—a a few of these can be found on my website. Also, I’m hoping to produce the companion performance text to [red missed aches], “Read Coordinates,” that I wrote and directed with my partner, Sean Cain. This was originally staged as a performance piece while I was living in Baton Rouge. I held the performance in my living room and invited spectators to sneak into my house, put on my clothes, and watch me pour milk on myself. It was a huge success.

Andrew Ervin is the author of Extraordinary Renditions