An Assessment of Fast Food Hamburgers in the Southeastern United States, pt. 4 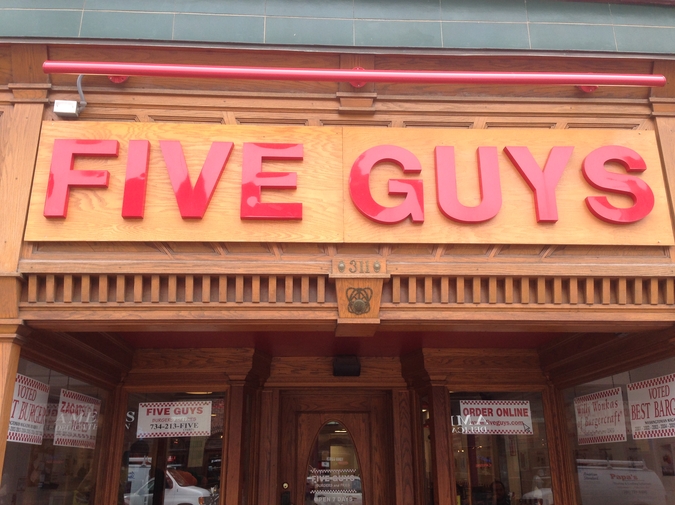 NOTE: This is the final of four installments in this series. We will be featuring two hamburger joints at a time. Read previous installments 1, 2 and 3.

With only 88 locations in four states, Cook Out is the smallest burger joint sampled in this study. Cook Out started in Greensboro, North Carolina in 1989 and has since expanded slowly through the southeast. Cook Out has a reputation for a huge variety of milkshakes and their quaint habit of putting bible verses on all their shit. My Sprite, for instance, came with “Proverbs 1:7” printed on it. I didn’t look it up but I assume it probably had something to do with God, Sprite or God’s outlook on man’s pursuit of refreshment.

Cook Out had even less of a dining environment than Sonic. There were seven parking spots and two drive-thru lanes. I had to perform an illegal traffic maneuver just to stay on the premises after getting my food. I parked back by a dumpster and watched the lunch rush. Before I ate I whispered a brief prayer (to stay true to the Cook Out brand).

And Jesus Lord, the hamburger was delicious. The meat was, by all estimations, real. It tasted like grill and beef. The vegetables were fresh and the condiments were applied with restraint. The hamburger wasn’t too pretty; it was lumpy and gnarled, like a homemade birdfeeder. I marveled at the robust, generous thickness of the patty. And they didn’t even draw attention to their thickness like Hardees. Their thickness was self-evident.

I observed from a peaceful distance as other customers approached the menu and made their own orders. I saw a happy old man rub the head of a fluffy dog. I saw a dude who looked like a young Patrick Swayze. I saw a woman and her brood of offspring in a sky blue mini van. I began to have deep (possibly Christian) insights about the circle of life. I thought: “when one observes the beauty and complexity of a Cook Out burger does one not observe the hand of a benevolent creator?” The cars continued to pull through. The sun kept shining. Something moved in the dumpster. My question went unanswered but it was all right. I pulled away from Cook Out deeply satisfied.

Over the past ten years, Five Guys has expanded from a small Virginia-based burger joint to a mythic fast food chain covering more than 40 states (the second smallest chain in this study behind Cook Out). They’ve got a reputation for great hamburgers and generous french fry portions.

I placed my order, grabbed a table and waited for my hamburger to come together. The prep area in Five Guys was totally exposed; I could see the four hamburger technicians assembling custom burger after custom burger. Five Guys actually had a substantial lunch rush, unlike almost all of the other restaurants. This led to another unique dining component: a  “sense of community”. There was no pervasive sadness, like with Burger King or Sonic. People were talking and laughing, not just staring at a wall or a flat screen TV as they chewed their food.

On the downside, Five Guys was expensive. They charged me a bold $5.22 for my burger. This annoyed me but the other customers seemed happy to pay it. And the walls of Five Guys were decorated with hamburger-related awards from Long Island Press, Washington Magazine and GQ (no CNN). So I thought: “Fuck it, I’ll pay $5.22 for a burger this great”. I was pumped.

Finally the hamburger came to my table in an authentic, greasy, brown paper bag. This is probably going to stomp the shit out of Cook Out, I thought My hypothesis will be verified, I thought. I unwrapped the burger from its aluminum foil cocoon. The first thing I noticed were the dual patties. Each one was thin but they added up to a thick strata of meat that rivaled the Cook Out patty in size. The vegetables were also generous, with pickles and tomatoes in every bite. But the fucker was greasy. The grease stains on the bag weren’t just for show; there was actually a lot of grease going on with the meat. It wasn’t awful, but it didn’t have any discernable off-the-grill flavor. The grease even tainted the bun, triggering a sogginess that truly repulsed me.

I felt betrayed by Five Guys. Their atmosphere set me at ease. Five Guys’ atmosphere said: “Trust us, these burgers are amazing. Everyone is talking about us.” and “Our potatoes are from Idaho Falls, Idaho.”[1] But the hamburger wasn’t that great. It had the context and the components of an amazing, classic burger, but something never quite came together for Five Guys.

Five Guy’s boastful persona got me thinking: is “best” hamburger a meaningful title? Is it worthwhile to digress into the realm of the hamburger and pick favorites?  Can it be done? Can any place just throw a sign on their trashcan claiming supremacy? Do we assume hamburgers have an inherent “nastiness” that allows us to rank them less seriously? Like how everybody is a winner in the special class? Is every hamburger worth cheering for? Then I remembered that I was a man of science and precision. I remembered the WBI and I knew that there could only be one best hamburger.

Cook Out has the best hamburgers in both Sheer Pleasure (WBI) and Cost to Pleasure Quotient (C2PQ).

Classic burgers like McDonald’s and Burger King were not as charming as I hypothesized.

Generally speaking, the smaller the chain, the better the hamburger.

Generally speaking, the more expensive the hamburger, the better the hamburger (with the burning exception of the Subway Longburger which was both extremely expensive and unspeakably vile) (see Appendix D for full cost to pleasure analysis).

My hypothesis stood up for the most part. Five Guys wasn’t as good as it could have been but it still performed well. Expense factored into quality as I predicted but the “classic” burgers couldn’t compete with their contemporaries. But more importantly, as I consumed these hamburgers I began to notice larger patterns in them, and the patterns of fast food in my own life. At most these hamburgers could offer me a window back to simpler times, a reminder of sitting with my friends on the curb and eating something cheap and shitty. A time when my metabolism was still pretty good and heart disease and cholesterol were just vague concepts to me like the stock market or using condoms. At worst, these hamburgers could become an addiction and turn me into one of the super fatties in Burger King. The fast food hamburger tempts us all, peeking as it does from a plastic clamshell or a crinkled sleeve of wax paper. It appeals to us with both simplicity and mystique, with both promise and guile. It is up to us whether we embrace or shun it. Or whether we waltz with the hamburger, slowly and responsibly, over the course of a lifetime.

FOR FAST FOOD BURGERS ONLY 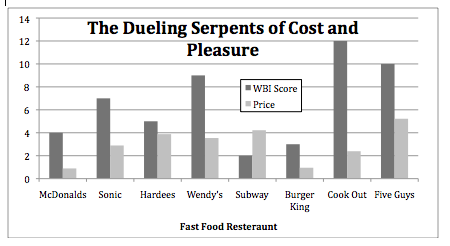 Subtract the Price from the WBI score to derive the Cost to Pleasure Quotient (or C2PQ).

Cook Out has a very high C2PQ of 9.61 where as Subway has a very low C2PQ of         -2.22 (the only sandwich to fall below zero into the “Zone of Remorse”). Hardees and Burger King are also poor choices. We can see that though Five Guys has a better burger than Wendy’s, Wendy’s offers a better C2PQ for the shrewd customer.

[1] Pretty sure that Idaho Falls is not a real place