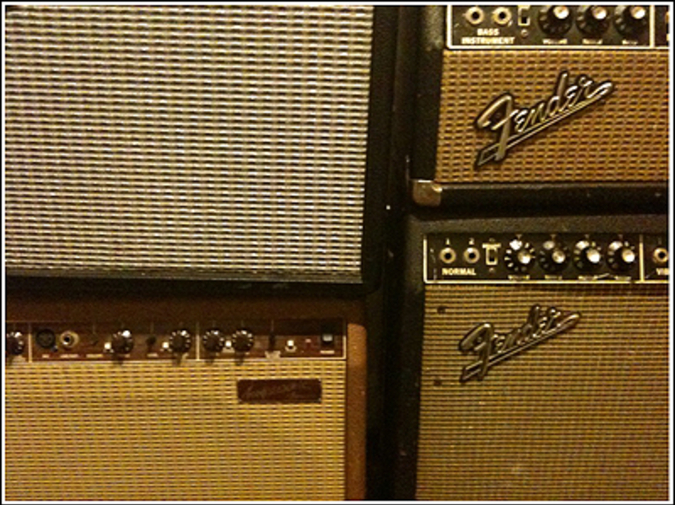 My boss’s dealer was an Israeli guy named Amir who lived in Highland Park with his girlfriend and drove a Porsche. I met him one afternoon my first week working at Vintage Guitars. My boss Rick was out at lunch and I was watching the front desk. Amir had dark hair and wore a starched dress shirt and dark pants. His eyes were a type of deep gray, like Native Americans’ eyes. He introduced himself, and while he waited for Rick he told me a story about how he watched his father and uncle get robbed once when they lived down in San Angelo and ran a small jewelry shop. The robber held his father’s face down against the glass counter with one hand and used the other to point a gun to Amir’s father’s head. Amir said his uncle came out of the back room and hit the guy in the back with a baseball bat. The guy fell over and Amir’s uncle proceeded to punch the guy in the face while Amir’s father called the police.

“So maybe it’s a good thing you usually work in the back, right?” he said. He laughed.

After work we went out for a drink downtown and Amir told me he had a Fender Stratocaster signed by guitar legend Stevie Ray Vaughn.

“Rick loves it,” he said. “He’s the biggest fan I know. I let him play it whenever he comes over.”

Rick and Vince always played lots of classic rock in the store. Lots of Stevie Ray Vaughn, Hendrix, The Who. I felt like I was in a time warp every time I was at work.

“Really? We’ll stop by my place and I’ll show it to you.”

I rode with Amir in his Porsche in the cold drizzle. The windshield wipers squeaked. We headed through the city and out to Highland Hills, down winding streets and past large houses until we reached his house in a cul-de-sac.

His house was huge and elaborately decorated. I didn’t ask how he could afford it on just drug money, but also I got the impression his family had a lot of money. We went upstairs to a room where he had two guitars, A Marshall amp, a large flat-screen TV, and shelves full of books and CDs. Amir opened beers and let me plug in his Gretsch to his Marshall amp. I played a few bar chords. The sound wailed through the amp, heavy and full of distortion. Amir played some blues licks, parts of “Red House” and something by Son Seals. He showed me the signed Stratocaster and asked if I’d tried any coke with Rick and Vince.

“They bring me customers,” he said.

I told him I hadn’t done any coke with them.

“I’ll give you a sample,” he said. He produced a tiny bottle of cocaine and cut a line out on the coffee table. “Some people around here buy the cheap shit, you know, the shit manufactured right here in Dallas. I tell them they’re getting fucked. They buy cheap crank. They smoke meth, they’re hooked the first time, just like if they shoot it up. They get fucked for what they pay for. This coke is Colombian.”

“And crank just doesn’t last very long. This coke is fucking good. You’ll like it.”

I sniffed a little of the cocaine and then Amir finished it off. His wife called him on his cell and he invited me to stay for dinner, but I wanted to leave. He understood. After we finished our beers he drove me all the way back to my apartment on 47 Alley Street in Deep Ellum. My mouth was dry and he told me to have another beer when I got upstairs.

“A drink always helps with coke,” he said.

I thanked him and he shook my hand. “I’ll see you again soon,” he said.

I know he just wanted my business, but I liked the guy. For a dealer he seemed trustworthy. He did all the right things.