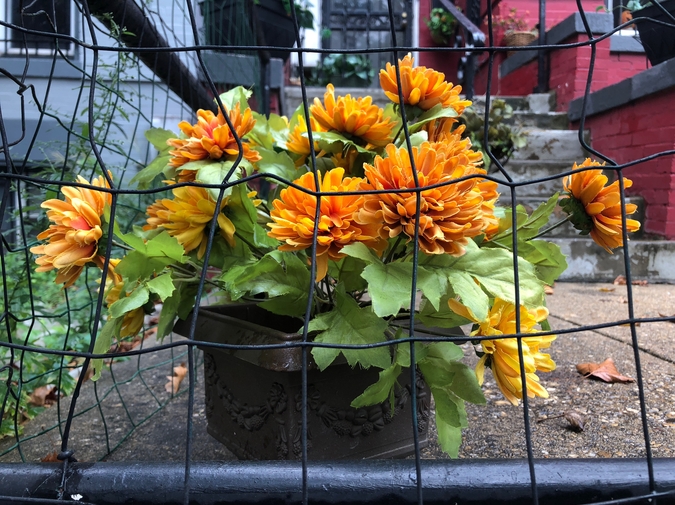 An insecure bullied girl has nowhere to go but to meet a razor in a bathroom. Standing in front of a mirror stained with steam finger messages and shaving cream staring at a face she’s begrudgingly memorized because that’s what little girls are told they have to do.

Pluck this. Plump here. Squeeze that. Outline there.

At lunch, I remember feeling the box cutter in my front jean pocket. Hard. Capable. Ready. I wonder if Mr. Caldwell ever wondered where it went. I wonder if it was his favorite box cutter. I wonder if he worried about which student it was at home with staring at the him or her just wanting to dig in.

My father was asleep. He was always asleep.

I don’t remember where my mother was.

My mother loved geese. The entire house was a homage to the bird. The wallpaper in the kitchen had images of geese in bows around their neck, some in little bonnets. Statues lined shelves that she neglected to dust. The bathroom soap dispenser was a baby goose with its neck cracked. The wallpaper in the bathroom peeling from the dampness printed with two geese holding a heart by a string together. My mother said to my father, while he was spreading it onto the wood paneling, “it’s like us, two little lovers.” I would bet money he shook his head. He was always shaking his head at her.

I can’t forget her saying that to him. When I was staring at those geese in the bathroom stretching my belly flat with my hands I said those words over again in my head. When I thought about killing myself with the box cutter I had stolen from Mr. Caldwell’s shop class I said those words over again in my head. When I overdosed on cocaine and was propped up against the tub, before I blacked out, staring at those geese, I heard her saying it so clearly it was as though she was there next to me. As I sat on the counter, my ass against the sink rim, my legs around the body of someone that should not have mattered, I stared over his shoulder at the images wondering if there was one my mother loved the most. Is the one right in front of the toilet her favorite? Or the one directly behind you while staring in the mirror?

I worried I might scream. Did suicide make a noise? I didn’t know. To be sure I brought in my portable radio. Though he was asleep, I wanted to be sure my father didn’t hear it. I loved him more than that.

Brandon, a senior, who was dating my friend’s older sister sometimes gave us a ride into school. He was our school’s John Bender. Sitting in the backseat of his black Chevy something or other I felt cool. I wasn’t special but I wasn’t nothing either.

I wish I knew what I thought the first time I heard “Even Flow” through his speakers. When his girlfriend pushed eject on the tape player, it was then I noticed it was even a song on a tape. It was too hard, she complained, too loud. I remember Brandon’s eyes meeting mine in the rearview when I said I liked it. Like we knew things she didn’t. Or maybe the world didn’t.

When he dropped my friend and I off at the door of the school his arm stretched over the front seat and out to me. He said my name, for the first time, and then told me to take the tape. He said to let him know how I liked it when I saw him again.

That night I immediately put it into my tape deck but before I had a chance to listen, my mother made me sit with my father while he ate dinner. He needed to be supervised to eat or drink at this point as he had a difficulty swallowing with the oxygen machine. My mother also just worried that he’d try to kill himself by choking. She didn’t say it aloud, of course, but you could feel it.

In the bathroom, the box cutter on the counter top, the radio by my side, I hit play. But at first it was just background noise. Until it wasn’t.

The opening guitar chords literally grabbed me by my chin and turned my face to the mirror. Hearing it now, years later, I get goosebumps remembering how it felt that day. Staring at the mirror, I can vividly recall Eddie Vedder’s voice as he makes his way into the song with the, “Son, she said….” The words then didn’t resonate like they did the next 200 times I heard it but his voice, the way he moaned through some syllables, and screamed through others reflected how my insides felt. It captured not just the adjective of emotion but the nondescript.

The bizarre twist of fate of me standing before a razor blade listening to a song that repeated, “I’m still alive” stopped me from doing anything but staring at myself. I don’t know if I was really seeing myself but I was finally hearing myself. Even though I was silent, even though the drums and guitar slammed through every beat and chord I could hear myself screaming.

Before the song ended my finger was on the stop button. I didn’t care (yet) what was next. I wasn’t ready.

Eventually, I grew tired of the bathroom. I hid the blade under the sink, behind the bucket that captured a leaky faucet, and I took my radio to my bedroom. Laying on the hand me down mattresses stacked on my bedroom floor I finally felt myself waking up.

Jacqueline Kirkpatrick is a writer from Albany, NY.  Her work can be found in Creative Nonfiction, The Rumpus, and in other places you can find by checking out:  jacquelinekirkpatrick.com. She received her MFA from the now murdered program at The College of Saint Rose. She still listens to Pearl Jam at least three times a day.