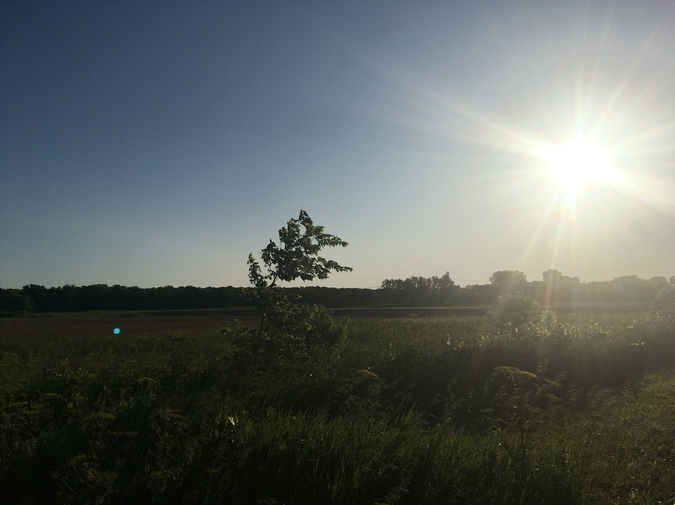 We were eager to go outside.  It had been the most peaceful night of the summer, which had gone too fast and not fast enough.  Pasta primavera for dinner with store bought basil because we had already lost one basil plant due to either negligence, or, rather, what we hoped were circumstances outside of our control.  The spiders were their own keepers, and we didn’t feel it would lead to good karma if we were to destroy anyone’s home, though they were becoming a bit much, reproducing with ease, but at least they didn’t flaunt these successes over the internet. I moderately feared the spiders—how he felt about the squirrels—but at least, except for the one incident, the squirrels stayed outside.

After the pasta we made our way into bed and it all went smoothly—it even seemed to be enjoyable for both of us.  We laid on our backs for a while afterwards, my legs together and angled back over my torso—a pose I once saw a Youtube lion get into after she endured seven seconds of being mounted.  While I maintained lion’s pose, Paul ran his fingers through his tangle of chest hair, his free hand flirting with my hip.

In our underwear we sat at the kitchen table and ate cherries and talked about our grandparents and their accents and the shapes of their eyes and noses.  We each had one grandma who remained.  He said he loved the feel of the cherry pit in his mouth, its perfect smoothness.  I agreed about the smoothness and added that I loved the rich color.  He agreed about the rich color and added that he loved the feeling of plucking the stem with cherry already in mouth.  I agreed it was a very special fruit and that we could go on and on about its specialness, but we should get outside before we lost our motivation.

Let’s just stroll tonight, I said.  We left our tennis rackets in the wicker basket by the door, our water bottles turned over in the dish rack, our phones on the couch.  Our street had no lights and no sidewalk, so we held onto each other and picked up our feet high and let them down gently.

Your eyes will adjust, I promised.

Just one fricken’ streetlight would make all the difference, Paul said, and I could feel his head shaking and mouth scrunching. He somehow managed to take this kind of thing— negligent city planning—personally.

Soon our eyes indeed created their own light and we let go of each other, starting down what we called the hill, taking in the grassy air.  I brought up the idea of anxiety for survival.  It was the topic of a podcast I had listened to that morning while clearing out another bag of clothes for Salvation Army—for the time being I had become addicted to this kind of purging.  It was a temporary addiction, I reasoned, the kind of addiction that one needs.  The podcast cited a recent study that concluded teens who are more anxious are less likely to die in a car accident.  He dismissed it as an oversimplification.  There are so many variables, he said.

When I walked alone, I liked to go down by the bike path.  A stream, to put it generously, ran along it, and I liked to look for frogs and offer the family of ducks a hyperbolically formal greeting: Madam, Sir, Doctor, good day—an inside joke I shared with myself.  I liked these jokes because they felt like parts of me I would never lose.  There was even an occasional turtle scooting across the path or basking in the sun.  A few months ago, I came across a blue heron, which I had assumed was injured because she let me creep within a few feet of her as she waded in the shallow water.  When I pulled out my phone to document the moment, she spread her wings and sprung into the air before I could tap the camera icon.  She kept low to the ground, disappearing through the row of pine trees and out of sight.  I looked for ripples where she’d been and wondered if she was ever there or if my mind had once again played a trick on me, creating a someone out of desire alone.

Paul had an aversion to the bike path because on the other side of the row of young pine trees were parking lots attached to large, small-windowed corporate buildings from the eighties.  An aesthetic he deemed inhumane.  You don’t have to look through the trees, I would say.  But he would retort that simply knowing they were there depressed him.  Or he might say, there’s no natural beauty in this town, so why pretend?  Pretending ages you, he once claimed, he had heard it on a podcast.  But tonight, he suggested we go down to the path.  He didn’t say why, and I didn’t ask because it was one of those rare moments where everything felt fine.  The air was sweet from the lilacs.  Our mouths were sweet from the cherries.  Our minds were at ease, our spines tingling—once again we’d created possibility.

The path was unlit yet light enough to see her.  She stood in the moonlight, her legs and beak glowing.  I wouldn’t be the first to acknowledge her. I would play it cool because he worried about me.  I worried less about him because he always had a coping mechanism up his sleeve.  A rational refrain to mutter.  A sporting event to obsess over.  A tragic global event or mind-blowing historical statistic to put it all in perspective.

Well, well, who do we have here? he said, trying to control the excitement in his voice—how he loved what he called the absurdity of large birds.

I think it’s a blue heron, I said.

Out of all the towns to hang out in when you have wings that can take you anywhere.  I’m willing to bet she’s lost.

I don’t think birds get lost, I said.

I’d be in Athens or Jerusalem.  Somewhere older than we can even wrap our heads around.  At the very least Philadelphia.

Over the past year I had been explicit about what I thought were omens.  Two doves in our driveway, hitting all five lights en route to Target, the sun raining down on us for his backyard birthday barbeque.

Maybe, he said, taking a few of my fingers and getting so quiet he must have been holding his breath.  I also started to hold my breath and then at some point he grabbed my full hand and squeezed, as if he had never started a sentence out loud.  It had been a private moment, which I could only respect.

Well, I said, squeezing back, should we see if she wants to hit up Steak ‘n Shake?

She could stand to add some saturated fat to her diet, look at those toothpick legs.

Look who’s talking, I said, pinching his side.

I’m trying not to take up too much space.

You would say that, I said.

And you would say that, he said.

Even though Steak ‘n Shake was half empty, the waitress sat us next to a table of rowdy high schoolers who were trying hard not to show how hard they were trying to flirt with and impress each other.  Occasionally, one of the boys, who seemed to go by both Junk and Corey, looked over at us and smirked as if he was winding up with a roast to amuse his friends: look at these married 30-something closet-hipsters with nothing better to do than go sober as a horse to Steak ‘n Shake at midnight and order portabella burgers of all things as if they’re at a real restaurant, constantly saying please and thank you and sorry to the waitress like she’s someone important.

But Junk kept looking over at me and the waitress kept skipping by us with trays of milkshakes and onion rings and triple cheeseburgers. Eventually, Paul got restless and loped up to the front of the restaurant to try to snag a stuffed animal with a mechanical claw.

Hey lady, Junk called out, louder than necessary, don’t I see you walking by NHS sometimes?

I shook my head and said, I don’t think so, but he kept staring.

I looked back to see Paul standing at the cash register, exchanging a dollar for quarters, his leg shaking like it sometimes does.

Yeah it is you, Junk said, holding a French fry like a cigarette and taking a nice long drag.  He turned to the shaggy haired boy next to him.  That’s hot smoker girl, he said.

She’s like the same age as your mom, said the shaggy boy, indifferently.  But she’s not bad.

You guys are so annoying, one of the girls said.

Whatever, Junk said, then he turned to me.  See ya Monday, I got your light, he mimed lighting his French fry.

Yeah playa, a tubby boy said, leaning across the table to punch Junk in the shoulder. Everyone laughed.

I don’t smoke, I called out, but no one heard me, and I sounded uncertain.

It’s got a grip on you, I punned, and Paul offered one ha-ha.

We inhaled the portabella burgers, then ordered milkshakes and dipped fries into them, and then we ordered a round of good old fashion steak burgers and onion rings.  We decided not to care, not to worry, not to even think—we decided nothing we did at this point mattered, and our bodies were the bodies we had and they were good bodies and would not take offense to one night of binging on fast food.

At some point Junk and crew got up, leaving a table covered in shredded napkins and straw wrappers, and ketchup smeared plates.  We stayed in our booth for hours as different groups of teens paraded in and out.  Every so often Paul got up to play the claw.  I’ve gotta get one fricken’ penguin, he said.  I’m so close.  It would have been futile to tell him it didn’t matter, didn’t mean anything, had no bearing on our future. He would just say, I know that, and then ask me if I had any more quarters on me.

The next morning I woke up early and tiptoed around the house, filling bags while he slept on his side, clutching a pillow to his chest and every so often licking his lips and swallowing.  In the old world our grandparents and great-grandparents somehow survived with very little.  Perhaps survival was made easier by lack of material tying one down.  I filled up seven more bags of stuff, some of it perfectly good, wedding gifts, some of it old and sentimental, some of it never used.  Perhaps it was a new take on death cleaning or maybe there was a need to create space.  Either way, the stuff would continue to exist somewhere else—there was not a thing in the world that could just disappear and for that I was both troubled and relieved.

Michael Don is the author of the story collection Partners and Strangers (Carnegie Mellon University Press, 2019). His stories have appeared in journals such as Vol 1 Brooklyn, SmokeLong Quarterly, and Fiction International. He lives in Boston and teaches at Tufts University and
GrubStreet. michaeldon.net