The Bottom of the Order: A Photograph of Gaylord Perry Being Investigated for Foreign Substances 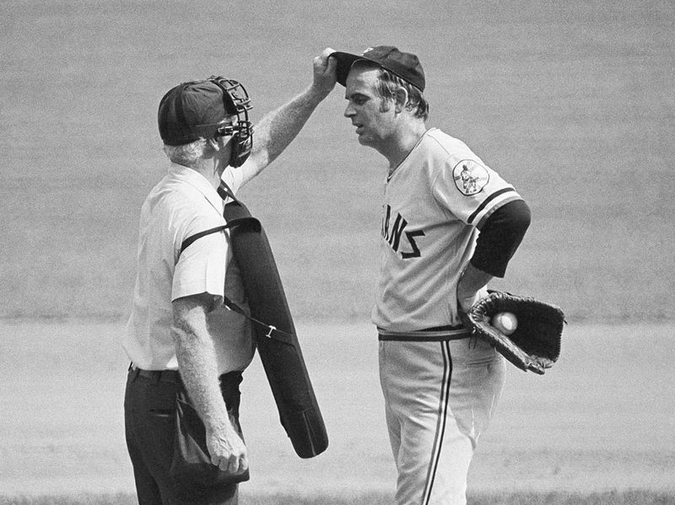 Gaylord Perry toiled for twenty-two seasons in the majors, and the look on his face suggests it was hard toil indeed. Wind worn, exasperated, he mutely submits to yet another examination of his cap, his head, his uniform, for a dab of Vaseline, a smear of K-Y. It might or might not have been there – Perry's success rested on the twin pillars of a doctored ball's unpredictability, and the thought, instilled in the head of each batter he faced, that the ball might be materially abetted in its tortuous journey from mound to plate.

This scene, captured mid-investigation, is from somewhere between 1972 and '75, when Perry'd taken his act to Cleveland, and though we don't know just where the game takes place (the photo's grayscale presentation makes it hard to say if Perry's uniform is home white or road gray), or precisely when, we can assert with confidence that the umpire failed to uncover irrefutable evidence of malfeasance; the righty wouldn't be ejected from a contest for such an offence until late August of 1982 – his twenty-first season. For that infraction the American League suspended him ten games and levied a $250 fine.

Not that there wasn't reason for suspicion on the part of the ump, or whatever member of the opposing team requested the check. At this point, Perry has either recently or is soon to publish Me and the Spitter: An Autobiographical Confession, confirming in print what everyone has known for a decade or more.

He broke in with the Giants in 1962, and stayed in San Francisco through the '71 season, but his point of contact with the dark art of the spitball probably came in 1964, when he shared the clubhouse with Bob Shaw. Shaw, a righthanded journeyman, kicked around, had two good years with the White Sox, then an All Star year in '62 while with Milwaukee, but by the time he landed in San Fran he found himself doing mop up duty for a fourth place club, the sort of fungible presence in a bullpen sometimes known as a “warm body.”

You can imagine them out there, can't you, between Perry's starts, discussing the finer points of deception, the student and his mentor, all those hours to kill in the bullpen at Candlestick Park, with the cold brine and petrochemical tang of the Bay swirling about them. You get a tube of K-Y Jelly, Shaw would have counselled, and you put a dollop in your hair, on your hat, inside the neck of the jersey, the cuff of your right pantleg. “Load it up in about three different places,” he would later tell a reporter, “so you don't go to the same place.”

Credit Perry here for recognizing the lay of the land. He was playing baseball, not seeking ordination. Any available advantage was to be exploited. So Perry fell into the herky improvisational rhythm of American professional life, reasoning, we might surmise, that the only fault to be found in cheating is if it is done artlessly.

The “mystery pitch,” it was sometimes called, a euphemistic bit of doublespeak among the initiated. But everybody knew what it was. Perry would run his fingers “across the underside of the bill of that cap, down the right side of his face,” as Dave Niehaus would suggestively narrate while doing the play by play during Perry's stint in Seattle ('82-'83).

Perry could throw just about anything. He had a forkball, as well as a decent fastball, and could harass batters with a twelve-to-six humpback curveball, but it was the “mystery pitch” that made the rest of them more effective, dancing and dipping toward home, scrambling a hitter's eye, shaking his confidence.

“Slider,” the radio and TV announcers would say, “or could have been a change up.”

“The wet one,” Gaylord's older brother Jim sometimes called it.

By the time the photo was taken Perry was a decade into a two-decade career, but he already looks ancient. In San Francisco he kept things pretty trim, or so suggests the photographic record, but once he moved on from the Giants he seems to have achieved a more or less permanent state of dishevelment. Sign of the times, perhaps, or sign of the man's growing comfort with his place in the world. He prevailed in an era that's hard for us to parse now, at this remove. It's too easy to call his appearance avuncular – somebody's pack-a-day uncle, Oldsmobile and wingtips and dirty jokes, taking slugs of Wild Turkey off a tin flask. But what he really looks like is a father. As a child I'd have looked at him and thought, Yes, this is what a man looks like, a man of a certain vintage, coming as he did from a generation of men who looked older than we do now, even at the same age. My father's peers were naval officers, but they too belonged to this aftershave-rich, golf spiked branch of humanity.

Perry was a pro ballplayer, but not someone you'd call an athlete. He looks, in the photo, as in most photos, like a man who grunts huffily when he bends over to tie his shoes.

The second figure, the man with the bill of Perry's cap in his hand, deserves some scrutiny, too. I can't identify him by the back of his head, this employee of the American League, but I know that, on that mound, on that field, wherever it is, in whichever ballpark in whatever Junior Circuit city, he's the law.

He's got what looks to be a couch cushion strapped to his chest, but otherwise he's dressed like a bus driver in what I'm going to guess is a polyester shirt – look at the perma-crease on the right sleeve – and wool blend slacks, a bag of balls slung off his belt. As both a precondition and result of his role he's as versed in the rules of the game as he is in the tricks men will employ to circumvent them. He's seen it all. He's probably even searched Perry's person before, just like this.

I'm not sure if Perry is our hero or antihero in this scenario, but either way we're rooting against the umpire. At least I am. In the reductionist Manichean reading of this text, the ump's a functionary, a jackboot, there to stand in for whatever machine you care to picture: the state, the system, the generation ahead of yours. His job is to harsh Perry's vibe.

With not a little simmering animosity, Perry submits to the inspection, this routine indignity performed perfunctorily by our mystery ump, without conviction, but with the practised wiliness and cynicism of a person tasked with arbitrating the daily spike-and-dirt struggle of men paid to outhustle one another. Perry, I have no doubt, shrugged this off, bulldogging his way through, as was his custom. He led the NL in innings pitched in '69 and '70, with 325 and 329, respectively. Achieved a career high in Cleveland three years later, with 344, though Chicago's Wilbur Wood pitched fifteen more. Perry did not fold easily.

Time shifts social mores. That's what Perry might argue. The spitball was once legal. Then it wasn't. What did they take away from hitters? In order to even things out a bit, it can be necessary to fudge the lines, to work outside the margins. Use what you've got. And it worked: 314 wins, a Cy Young Award in each league, Hall of Fame. He carved a very long career out of the murky zone between culpability and deniability.

Is it there? Yeah, it's probably there. There but concealed enough to make it hard for the ump to say with any certainty that it's there. Sometimes Perry would put something on his zipper, because no ump wanted to go poking around there.

Why was it there? Did Gaylord Perry need it to succeed? Maybe, and maybe not. I suspect, though, that its presence on all those different uniforms and caps – nine different teams in two leagues, from Kennedy to Reagan, Please Please Me to Thriller – proves that it was needed, that Gaylord Perry was not Gaylord Perry if not doing what Gaylord Perry did. A person does not come lightly to such a decision, but rather only after performing some deep and enviable self-analysis. This is who I am, a person might eventually conclude, and I'm going to ride this horse until we both expire.

Andrew Forbes is the author of the story collections Lands and Forests (Invisible Publishing, 2019) and What You Need (2015), which was shortlisted for the Danuta Gleed Literary Award, and named a finalist for the Trillium Book Prize. He is also the author of The Utility of Boredom: Baseball Essays (2016). Forbes lives in Peterborough, Ontario.