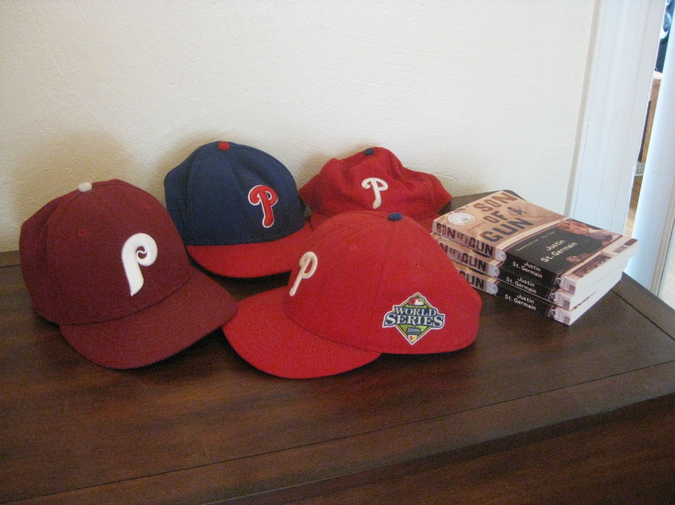 As I write this, just past noon on the Fourth of July, the Phillies are losing to the Pirates 2-1 in the bottom of the fifth. If they hold on to lose, they’ll be six games under. 500 and—oh, in the words of Harry Doyle, who really gives a shit? It’s becoming clear that I chose a bad year to watch and write about my favorite team. Like many Phillies fans, I entered this season understanding on a rational level that they weren’t very good — they finished in third place last year — but still held out some hope that their constellation of onetime stars might have one last glimmer left. But now the sun has set on that hope, and on this strained astrological metaphor.

The upcoming All-Star break usually offers respite from even the most stultifying of midseason slumps, but because All-Star voting is an asinine process decided by myopic Midwestern homers — Pete Kozma, the Cardinals shortstop of the .590 OPS, has more than a million votes, thanks to the self-described “Best Fans in Baseball” — the Phillies may not have a single All-Star voted in, though Domonic Brown will likely be a manager’s choice.

Left with little to look forward to this season, I’ve been looking back on seasons past. In particular, I’ve been thinking about the first Phillies game I attended. It was late July of 1995. The Phils were two years removed from winning the NL pennant, and most of Macho Row was still playing out the string. Like the current team, the ’95 Phils weren’t bad, exactly — according to the incomparable Baseball Reference, they were 43-37 entering the game in question — but staff ace Curt Schilling had just gone down with a shoulder injury, the ascendant Barves were running away with the NL, and the proverbial writing was on the walls of Veterans Stadium, alongside the urine stains.

My family had returned to our motherland of Philadelphia for a rare visit. I had just turned fourteen, and as a late birthday present, my grandfather drove us down to the Vet in his baby blue Caddy to see the Phillies host the Rockies. That game was both the best birthday present I’ve ever gotten and a fitting initiation to Philly fandom, as I got to sit in a half-empty stadium and watch a goddamned expansion team beat the hell out of the Phillies, 11-3. The Rockies hit three homers in the first four innings, and the Phillies didn’t manage a run until the fifth, when the immortal Oscar Oliveres — a relief pitcher — hit a two-run homer, then, for an encore, promptly allowed the Rockies to score three more runs.

But most of that I know from reading the box score archived online. What I remember most about my first Phillies game is not so much the events but the impression it made. Grandpop had gotten us seats right behind the home dugout, among the sophisticates, roughly half a mile below the felonious hordes in the infamous 700 level. We were close enough to see the pools of tobacco spit seeping into the treacherous turf of the Vet, which still showed Eagles logos in July, and my favorite players issued from the dugout not fifty feet away. In person, most of those Phillies could have been mistaken for vagrants or criminals: Lenny Dykstra was so steroid-swollen that it seemed like somebody had inflated him with a bicycle pump, and not for nothing did his teammates nickname Jim Eisenreich “Dahmer.” Every time another Rockies homer left the yard, the crowd screamed obscenities. A twelve-year-old kid got booed for dropping a foul ball. A fat, shirtless guy circled the concourse waving an American flag, various Rocky-themed montages played on the Jumbotron, and the Phanatic stood on the dugout between innings, thrusting his bloated green crotch at the crowd. It was all so shitty. I loved it.

I’d watched the Phillies on TV before then, whenever I could, which wasn’t very often, living across the country in that era before satellite sports packages and internet streams. But after that first live game, I was hooked. A few years later, my adopted state of Arizona got an NL franchise, which meant I got to see the Phillies play one series a year, and in college I would occasionally road trip to San Diego to catch a few more games. But it was never quite the same as seeing them in Philly.

In the last ten years or so, since his second wife and my mother died in quick succession, leaving both of us at loose ends, I frequently flew back to Philly to visit Grandpop. We’d often talk about going to another game, especially after the city built a new ballpark in 2004. But we never did. My first Phillies game turned out to be Grandpop’s last. On Valentine’s Day 2011, the day after pitchers and catchers reported to Clearwater, he called with the bad news. I went back to see him once things were getting bleak, and for a few weeks we watched the Phillies every night, debating whether they’d make the playoffs we both knew he wouldn’t live to see. He died two years ago today.

The day after his funeral, my family made a pilgrimage to the new ballpark to watch the Phillies play the Barves. Fittingly, the home team lost, 4-1, and the Phils’ only run came on a home run by the pitcher, Cliff Lee. We observed the occasion in proper Philly-fan fashion: tailgated in the parking lot until we were good and drunk, harassed every Atlanta fan in sight, drowned our sorrows afterward in a strip club under the freeway.

On our way into the game that day, we took a detour to the former site of the Vet, now a parking lot for the new stadium. Monuments mark locations of note, home plate and the pitcher’s mound and so on, and a modest granite marker commemorates the war veterans who, in the era before corporate naming rights, had a stadium named after them.

It reminded me of a picture Grandpop had once sent me. Enclosed in his Christmas card in 2004 was a photo showing an aerial view of the South Philly Sports Complex, dated 3/21/04 at 7 a.m. The three new stadiums sit empty on the edges, huge and bright and sterile, ringed by vast stretches of parking lots. In the center of the picture, the Spectrum squats like a toad in a square of patchy grass, stubbornly resisting its own obsolescence. Across the street, Veterans Stadium is being blown up. The picture catches the Vet mid-implosion, its concrete outer ring half-crumbled into billows of gray dust. On the card, Grandpop had written: Thought you’d like this, pal.

Justin St. Germain is the author of Son of a Gun, a memoir, forthcoming from Random House 8/13. He lives in Albuquerque.