A Phan's Notes: On Patience 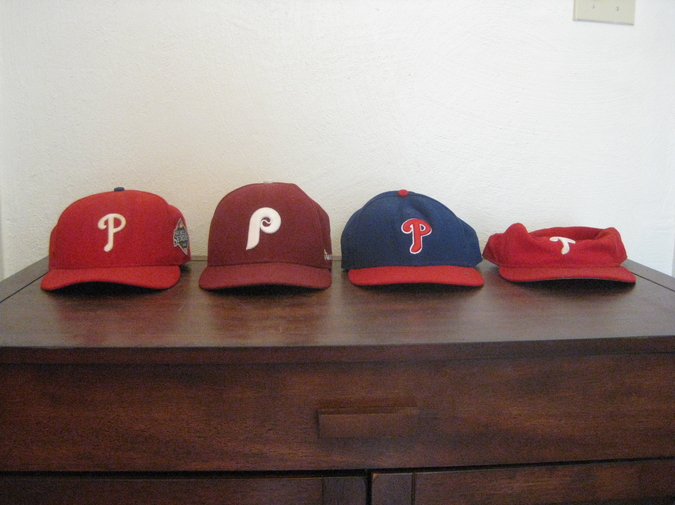 As I write this, nearly a month into the season, my beloved Phillies flounder in third place. Even that dubious standing owes much to their good fortune over the weekend, which saw Detroit sweep first-place Atlanta as the Phillies plied their brooms in Flushing. But, as Benjamin Franklin once said, wins against the Mets do not a good team make. With a record of 12-14, the Phils sit four games back of the Barves in the division and a full three out of that misbegotten sham, the second Wild Card — and it’s never a good sign when we’re invoking the Wild Card by the calends of May. After twenty-six games, the Phillies have played so poorly, they’re being sent to Cleveland as punishment.

Thus far, the Phillies’ problems have proven hard to pin down. As discussed in my last dispatch, their vaunted starting rotation failed them in the first week. The bats vanished in the second. They left their gloves at home for most of the third. And in the last week or so, the bullpen has hearkened back to the late Jose Mesa era. Bumbling umps cost the Phils at least one game. Then there’s plain old time: Philly has the fourth-oldest roster in the majors, and their stars skew heavily trigenarian. Staff aces Roy Halladay and Cliff Lee will soon turn 36 and 35, respectively. Their youngest starting infielder, Ryan Howard, a former MVP known somewhat problematically as “The Big Piece,” is 33 and still hobbled by a torn Achilles tendon suffered almost two years ago. You wonder if their best days are behind them.

Judging by their approach, so do they. Of all the Phillies’ problems, the most worrisome is their lack of patience. They’re one of the worst teams in the majors at taking walks; hell, they hardly take pitches. A recent 4-3 loss to St. Louis, in which Cardinals righty Adam Wainwright averaged one ball per batter, marked the Phillies’ fourth consecutive game without a walk, making them the first team in almost two years to accomplish that feat. If these guys were any worse at walking, they’d be in a Monty Python sketch.

It wasn’t always this way. For a three-year window around their 2008 title run, the Phils led the NL in walks. But the next year they lost the Series, and each season since, as they’ve fallen shorter and shorter of flying another flag, their walk rate has declined. In baseball parlance, this phenomenon is known as “pressing,” a slippery term usually defined as trying too hard. (Which seems counterintuitive in a sport so obsessed with scrappiness and hustle, but I digress.) It probably derives from “pressure,” and seems apt in describing an aging team fielding such high expectations. The math isn’t hard to do: the fourth-oldest team in the majors, with the third-highest payroll, tied for 16th in wins. It’s still only April, but everybody involved knows this is the current core’s last legitimate chance. A few stars will be free agents in the Fall, and the farm system is so barren they might as well sell it to ADM.

The players aren’t the only ones losing patience. Their manager, a mercurial Appalachian by the name of Charlie Fuqua Manuel, got himself ejected from his team’s latest loss for arguing a catcher’s interference call. The GM, Ruben Amaro, a man so addled by self-regard that a prominent Phillies blog created a Smug Advisory System in his honor, rattled his saber in a subsequent press conference, calling the team’s offensive production “ridiculous” — strong words coming from the guy who signs the checks. Maybe worst of all, the Phillies faithful is having a bit of a crisis: after a three-year sellout streak ended last August, attendance this season has fallen precipitously. And those eroding ticket sales support the foundation of the franchise, revenue, which in turn dictates payroll, which dictates the ability to attract premier free agents, and so on. If the Phillies can’t recover from this dismal start and compete this season, the losingest franchise in American professional sports might return to its historical mean. And anyone who remembers the grim, Gomorrhic death rattle of Veterans Stadium should properly dread that prospect.

With so much at stake for my favorite team, I can’t help but feel for the players under all this pressure, especially the homegrown core I’ve watched play together the last thousand games and change: Howard, Chase Utley, and Jimmy Rollins. These aren’t the Phillies I grew up watching, idolizing despite their steroid use (Lenny Dykstra), rampant boozing (Dykstra), consorting with bank robbers (John Kruk), and former Met-dom (Dykstra, who, it bears mentioning, is currently serving time in federal prison). The current Phillies are the players I’ve watched as an adult, and appreciated on adult terms: for the fine points of their games, for their personalities, even for their flaws. They’re roughly my age, and I can chart my career alongside theirs. It’s hard to see them pressing, hard to watch the urgent futility they play with now, because in some ways their pressing is similar to mine.

I too have been losing patience since the Fall of 2008. In late November of that heady year, not quite a month after Brad Lidge struck out Eric Hinske to clinch the city of Philadelphia’s first championship in a quarter century, I sold my first book. The ensuing years could prompt their own memoir (although I hereby promise not to write it), but prudence dictates I not discuss that delay. Let’s just say it’s coming out in a few months, and that the intervening time has taught me something about patience.

I was twenty-seven years old when I sold my book, a prospect entering my prime. Or so I thought; I remarked at the time that it felt like I’d been called up to the majors. But it’s been five years since then, the average length of a pro ballplayer’s career, and that novelty has long since worn off. In the meantime, I’ve had five apartments, four cars, three girlfriends, and three jobs. I moved halfway across the country. I gained thirty pounds, lost fifty, and gained ten back. Two of the people who appear in my book have died. My book has now hung around longer than my biological father did.

People told me to be patient, and I tried. I took up homebrewing, started riding bikes, developed a minor obsession with the Battle of the Bulge. Somewhere along the way I took a beginner’s yoga class, about which the less said, the better. I’m currently looking into photography courses. It’s a good thing the book’s coming out soon, or I’d probably knit you a scarf.

Which is all a roundabout way of saying that I empathize with the Phillies’ plight. One of the things I’ve come to believe about patience is that it’s a finite resource, less a virtue than a luxury. It’s easy to recommend patience when you have nothing at stake, when you’re not the one digging into that chalk box to face a hurtling ball, when you’ve never waited five years to spot your book on a rack. When it’s not your career in the balance, and you know from some serene place in the future what fruits your efforts will bring. But to be here now, in the moment, not-so-young-anymore and stagnant, is to wonder whether patience simply means waiting, how much the word retains its etymological origin in suffering, whether Shakespeare’s Lord Hastings was right to suggest, as he awaited execution, that patience is for prisoners.

Honorary Phillies fan Elizabeth Bishop famously said that the art of losing isn’t hard to master. The minor French humanist Luc de Clapiers, a fellow unfortunate, called patience the art of hoping. If history is any indication, the Phillies are better at the former. I wonder whether patience is an art men our age can learn.