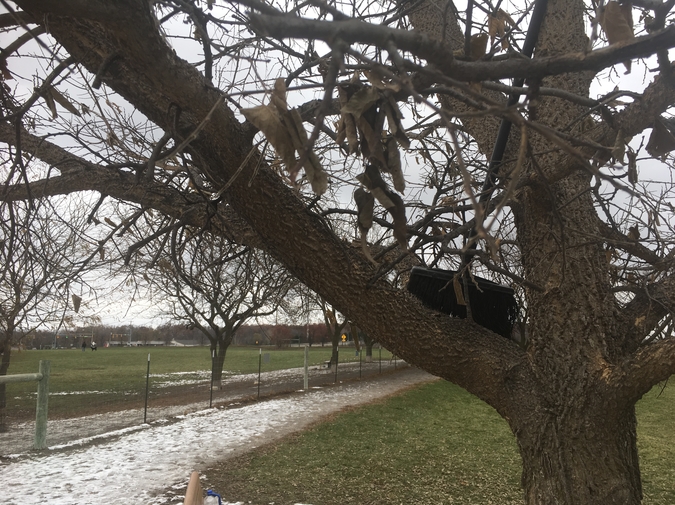 The girl liked to walk into the woods—she knew the way—to just past the point where she lost reception. Each Saturday, she liked to climb the same tree, for the comfort of knowing exactly where to place her foot, where to grab the branch above so it didn’t stick her palm.

But today, as she put the full weight of her body on that familiar branch, she heard a crack, and she pulled herself up just as the branch fell to the ground. It must have rotted through. But she was fine—she sighed and said aloud, “It’s fine, I’m fine.”

“Are you?” said the crow, landing next to her, pulling his long, shiny wings close to his body.

“Yes, just fine! So fine, in fact, I’ll stay up here for a little while, just as I had planned to do. The tree still smells like comfort, and the view of crisscrossing branches is still good and calming.”

“If you have to say you’re fine, you’re probably not,” the crow replied. “Really, you are a scared girl, scared you won’t be able to get back down once you decide to. You’re fine only because you keep saying it, instead of trying.”

“No. Maybe it wasn’t true when I started to say it, but by the time I finished, I realized I’m not too high at all—I can shimmy and jump down. And after all, whenever you’re a little afraid, emotionally, there’s nothing wrong with confirming to yourself, logically, that you don’t need to be. For example, here you are, speaking to me, a wild thing very near. That’s unusual, but not necessarily scary. Things like you can also be wise. It’s just—you seem to be trying to convince me to be afraid. Which is what evil things tend to do. In that case, will I stay safe by proving you wrong, by staying calm, or is that just what will be my downfall?”

“Then get down.” The girl crossed her arms.

“Here let me take a lock of your hair. I’ll fly back to town and find someone to come and rescue you.”

“A lock of hair? That’s a pretty wicked-seeming thing to take, isn’t it? Then again, though I could get down if I wanted, it would certainly be nice to be rescued. Especially by that one person in particular. And though locks of hair can be used for bad-spells, they are held in lockets by lovers just as often.”

“Hm. You’re right to be nervous about the hair. Well, what about a piece of clothing? A toenail? A bit of dry skin from your lip? I’ll bring him to you.”

“None of those. Bring him with my ring—maybe he’ll recognize it. And that’s not useful for spells or curses as far as I know.” She pulled off her ring and leaned towards the crow, who eyed its jewel glintingly.

“Here, take it.” He hopped forward and then back, and she leaned a little farther towards him. He grabbed the ring, and suddenly she couldn’t let it go. The crow unsheathed his wings and spread them wide, pulling the ring and the girl forward.

“He would never have come anyway,” said the crow.

Once she was a corpse, her eyes looked delicious to the crow.

Or—the girl grew feathers, and she cawed in confusion or delight. The crow won’t tell which.

Rachel Ranie Taube's writing has appeared in Hayden's Ferry Review, Cleaver Magazine, matchbook, and The Millions. She has been a C.D. Wright / Nan Snow Emerging Writer, a Tent Creative Writing Fellow, and an Electric Literature - Catapult Scholarship recipient. She is the managing editor of Ecotone at UNC-Wilmington.