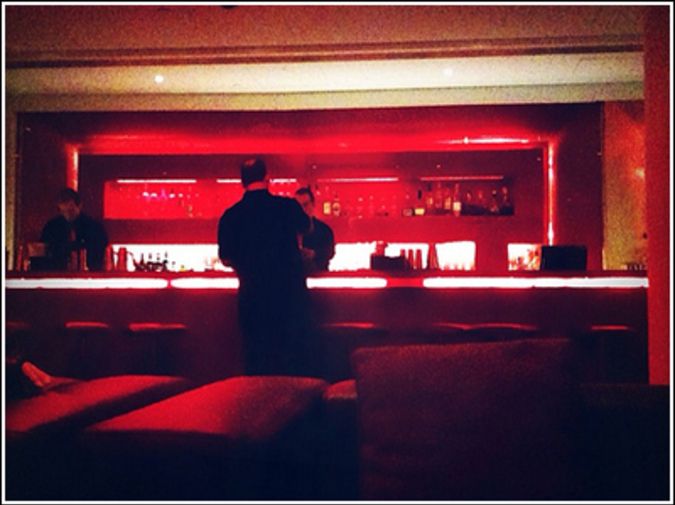 I put on my suit. It's a business suit. I'm a businessman and I mean business. I mean 'business' with a big 'B' and an ampersand. So from now on, I will say, I'm a Businessman &. Because it sounds more businesslike to be a Businessman & I mean Business!

Sometimes the phone rings but no one is there when I say, Hello? My wife crosses her legs as I look back to her; reading a fashion magazine in our fancy house, our home, she looks up and asks, Who is it? I say, Gee, honey, I don't know. Do you know who it is? But, No, she says, she doesn't know who it is. She asks, Would you be a dear and take out the garbage? Oh sure, I say, slamming the phone on the marble, the floor, Would I be a deer? Would I prance around, or maybe even fly, like one of Santa's reindeer? No problem, I say, It's Christmas, after all. It was Christmas & I mean Christmas.

I ask her, Is that what you want, dear? Do you want me to fly away? But No, she says, she doesn't want me to fly away; instead, she asks, Would you try not to drink so much when mother/father is around? And I say, Oh, of course I won't drink so much when they're around! After all, aren't I the responsible one? I'm a Businessman, you know. I'm Responsible. And she says, Well yes, dear, that was true once, but lately you've worried me so, and now I just don't know and I think, you know, it's not too much to ask that you to not get so... loaded while my parents, who paid for this house, our home, are visiting their house, their home — is that too much to ask? And I say yes, actually, that is too much to ask because I can't stand your parents — I mean, your presence — I can't stand your present parents and I need a little hair of the dog in order not to slit my fucking wrist watch in the rub a dub — know what I mean? I ask her, Or do you want me to break the garage door opener again?

The phone rings again and I say, Hello? Then I answer the phone. I hear someone breathing; it's a man. I say, Hello? And he says, Hello? It sounds just like me, I think, an echo perhaps, but then he begins to laugh. My wife uncrosses her legs as I look back at her; she hikes her skirt and licks her finger to part the lips and asks, Hello? The man continues to laugh so I slam the phone on the marble, the floor, and it shatters into a Billion pieces dotting the slab that is the base of our house, our home, but the voice still laughs. I look back and my wife is laughing, but in his voice, my voice; she laughs at me, but really it is I who is laughing — I am touching myself.

I tell her, I mean Business. I am a Businessman. I am a Businessman & I mean Business. I tell her, I'm going to find a new wife, a young wife, a new young wife who won't laugh at me in my own voice. She says, That's fine, dear, but I'll need your keys, the keys to this house, our home. And I say, Oh really, you need my keys? Well, that's just fine, that's great, in fact, they're right here! I search for my keys in my Business pants but all I can find is myself and I am touching myself and thinking about keystrokes and I can't find them. And I think, It's okay, self, we'll just stay right here where we belong; we don't need a new wife; this one is fine. And she says, Actually, now that I've thought about it I would rather make a new husband, please get off my marble floor. You're in this house, my home.

On the street everything is rotten. The birds don't flap their wings; they just fall to the ground, but you can't eat them because they're rotten; they've decayed past the point at which you could cook them over a garbage fire with the boys of the block, sharing lukewarm tallboys and arguing about the best way to skin a catatonic whiskey-bitch of a wife. She took my keys, he thinks. She took my house, myhome. My marble floors will go to shit, and in a week or so the plants will take over everything; they'll suck the house, the home, down, down into the ground, where it will become part of the root structure, of my wife, who will grow as tall as the buildings of downtown. Perhaps I will go there to apply for a job working inside my wife, he thinks. I will ask mother/father for a good position, he thinks. I will tell them I'm a Businessman & I mean Business, goddammit; they have to respect me! His face grows red, red as the blood that pours from the birds of the street. I mean, for god's sake look at this fucking Business suit — I mean Business goddammit! He begins to foam at the mouth. The boys of the block don't know what to do so they walk away as the foam pours from his mouth, filling the streets with a madcap sort of styro-type foam that he will, for the purposes of marketing, etc., call Styrofoam, which preserves the rotting birds as they fall into the foam as it covers the Earth in white. After all, he thinks, Itis Christmas & I mean Christmas.

The children come from all around to play in his Styrofoam and his wife looks down on him from her lofty perch amongst the buildings of downtown and she laughs in her own voice for once and cries, Oh my dear, isn't that just wonderful! Startled, he looks up her dress as she parts her lips; he smiles and expounds, Oh, yes. Yes, my dear, it is wonderful. The children are playing in my Styrofoam — I am the King of Christmas & I mean Christmas with a capital 'C' and an ampersand! And she says, Oh no, darling, I meant that man over there playing with the children.

The businessman asked, What man? There is no other man here; there's only me and the children. But sure enough, he sees himself, across the street, playing with the other children, building Styrofoammen in Business suits — and tell the truth, he was a little turned on by it all. He saw himself laughing and throwing Styrofoamballs at the children and his wife laughed in her own voice among the skyscrapers and he laughed in his voice but was so far removed from it all that he felt like none of it had any real value whatsoever; not that it was meaningless, exactly, just that it had no value.

Suddenly, as if acknowledging this lack of existential value in all things previously thought Important, the Styrofoam melted - all at once, all over the Earth, and the children went back to their houses, their homes; and suddenly it was only he and himself and his wife, who came down from herself to talk with him, to figure a way out of this mess. She held his hand and said, If you were nicer perhaps we could get along, but I find you are usually drunk and honestly I just don't see you being a very good father to your children and so I have to say I will maybe see you around but I don't want to hold your hand anymore because you are mean and irreverent and I no longer care that you are a Businessman & whatever else you say all the time.

They went away, to their house, their home, where they constructed babies from salvaged styrofoam and dressed them in tiny business suits — business with a tiny 'b' and without any meaning, without anything of value as might pertain to Business. They seemed to be happy, which was amazing because he had previously thought it was impossible for anyone to be happy, let alone himself and herself and business with a small 'b' and no &.

Reynard Seifert lives in Oakland, California. He is a DJ on Viva Radio. His work has appeared or is forthcoming on Pindeldyboz, PANK, and Word Riot. He is the editor of hahaclever dot com, and gives away music for books on his writer's blog.