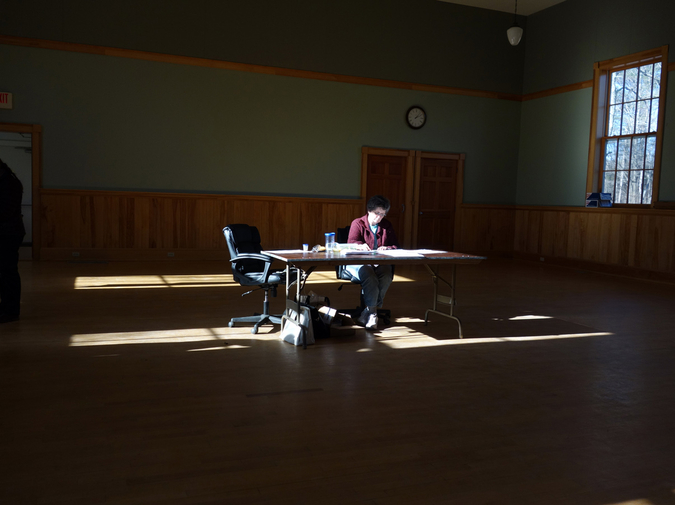 It started when you dreamed you were dead & I had to go looking in other rooms for your body. Turned on each light & either I found you or it was apparent by then that nothing remained to be found. There were men in the street who weren't really anywhere in particular. One had a way of saying everything you'd expect him to & one looked like your father before most of him burned up in that fire. When I saw you later that week it was to say goodbye & come back like a stranger. All the ice had melted & there were fields where a parking lot should have been & a single tree everyone agreed was the last of its kind. We went door-to-door performing small acts of cruelty. I was impressed by your memory when it came to the lies we told. It was dark enough to pretend that we couldn't see one another until one day we really couldn't. A peculiar calmness prevailed. It was your job to be unaccountable. It was my job to feed your name to the little trees in the park, & when they were big trees, to bring them down.

It's setting a dangerous precedent, you think, when the President climbs in your window to ask if it's true what they've been saying about his war. He doesn't smoke like it's rumored he used to but he takes a match from his pocket & looks around for anything to burn. The birds outside do nothing & you've learned that some things are just built this way. You look at each other. It's been so long since the President spoke to you like a man you're almost convinced the man inside him is gone. So you get this weird feeling like maybe it's all inevitable, his war & your reasons for warring against him. The President stares into the distance the way they taught him but still the night goes on like any other. It's so easy. You move to put on another record & he grabs your arm & then somehow you're dancing. No, not dancing. More like a moving embrace where one partner hangs onto the other & that partner promises many things beautiful & nice that don't ever come true. He smells like the end of the earth. There's a weariness about him that makes him appear taller & there's a tallness about him you find suspicious. Then the song's over & you're standing alone & he's standing alone & between you a new thing exists never to speak about. You'll remember him this way a long while afterward. Swinging his hammer. Whispering to whomever's asleep in your bed that he's here to save them.

They stand where they are because their hands are empty & their eyes belong to the accident. Concern, or so it seems to those who have gathered, spreads noiselessly through the crowd until even the onlooker most removed imagines herself at the accident's epicenter, barking orders, trying to place in discernible sequence a chain of uncertain events. When a boy without hands hears his name called, he steps away from the others to offer his statement. But his version keeps changing: I was driving the car, he says, or I was in the fields as the car drove past, or there was no car, just as there are no hands at the ends of these arms, which I now submit to you as evidence. Beyond the accident, in a town where a single filling station separates two neighboring cities, a man sleeps beside a woman the papers will later report had been decomposing for months. The earth is small & refuses to be remembered. I am telling you what I know.

The wounded ventriloquist sings her body to sleep in a darkened theater. They watch from the balcony with mounting interest each night as she waits for the song she must know will arrive. It comforts her. She likes to remember that somewhere—it's not clear where, exactly—a voice resonates with enough pain to feel familiar. They talk in excited whispers about “revoicing” & “hegemonic discourse practices.” Does the voice love the wound or require it? Some nights a single chair sits in a spotlight; some nights she walks barefoot through gravel & broken glass. Between the ventriloquist & her voice is the possibility that happiness depends on erasure. On the back of the chair a small patch of velvet ripples when it catches the light. After applause, the curtain. After the curtain, a shared feeling of emptiness. This, they agree, is why they return.

Man Disguised as a Man

While driving to work one morning a man disguised as a man forgets which man he is. The mask he wears confuses him. He recalls pulling it on the night before, perhaps even sleeping in it, but now—the road swerves through saguaro fields crowned in pale yellow flowers—he finds it difficult to determine if it is the face he wears or the face he was given at birth that belongs to him. Can the presence of the mask mean there's a part of himself still dividing? Is a road more beautiful for what it carries us toward? There is a word he remembers to mean that part of yourself brought to life by that part of yourself kept buried. He hangs his head in his hands. Though he imagines himself to be crying, when he pulls his fingers away he finds that only the mask on the seat beside him has shed tears.

Sean Rys lives in Tucson, Arizona, where works as a Lecturer with the Writing Program at the University of Arizona. His work has previously appeared or is forthcoming in journals such as DIAGRAM, Indiana Review, Devil's Lake, Cutbank, andThe Seattle Review, among others.