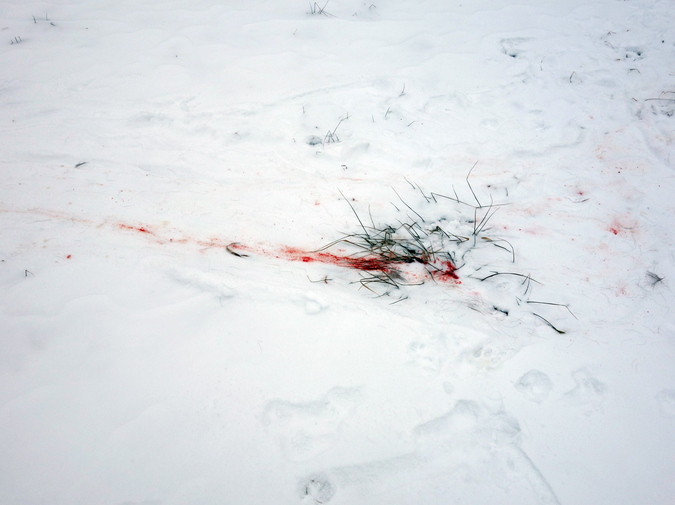 Essay On The Theory of Motion

You remember reading a poem once about a boy driving his grandmother to the library across town. Someone said that the car is a perfect device for giving a poem the feeling of motion, though you think the two must end up back at the grandmother's house eventually. Must walk the hallways crowded with family ghosts, all smiling through the window of a photograph & is that motion, really? This tendency to cross & recross the small terms of our own lives?

They expect me to talk about Newton, so fine— An object at rest stays at rest. An object in motion stays in motion. Friction has many names.

So it's no surprise that when the trains stop so do you.

What else is true? You beg each thing to answer. You make mouths for the answer to crawl through. You bite the inside of your cheek. You paint the world red all the way through.

I’m only kidding. You can’t expect everything to speak your language. To use these new mouths for what you imagine mouths are for. After all, you make a mouth on your upper thigh, the doctor calls it a wound. Calls it your sad hands at work again. You can’t get your body to tell the secret buried inside you. Can’t get it to tell you anything at all.

Anyway, you’ve begun to suspect that theory is less a movement toward truth & more a movement through a series of puns.

For example, a queer theorist—you don’t know who, but you can imagine their white spectacled face floating above a soft butch sweater—once wrote that they feel most at home in airports, because there everyone is “in transition.” (Let’s get the obvious out of the way—you were a girl & then you weren’t. You moved into the body of a boy, & the girl moved into misplaced language, into photographs.) Get it? Gender is like a country, like a field of signifying roses you can walk through, or wear tucked behind your ear.

Eventually the flower wilts & you can pick another, or burn the field, or turn & run back across the tracks.

The April I knew we would not outlast winter, we drove down the coast to swelter in a rented room. We drove to Virginia, then kept driving out into the ocean to an island we’d both read about as kids.

In the stories, there was a shipwreck hundreds of years ago. In the stories, no one survived but the horses who fought their way to shore, smooth coats all gone matted. Now, their survival lures tourists to this empty town.

They say that once a wild horse learns to eat from a person’s palm, once her fear has been trained back out, she will hand her body over to the pavement, to the slaughter. After all, what’s the difference between a hand concealing something sweet & a hand moving behind the window of a car? & you, before we walked out to where the horses grazed, you bought two apples. Pink ladies. Quartered them with the knife your father gave you, before your hands were strong enough to hold it.

I don’t know if that part’s true. Or if I care. I wasn’t listening, I admit, I was watching a bird thrash the glass surface of the lake, like it was trying to break back into the dark.

I forgot about that island until years later, riding home alone underneath the bay, then breaking through to an ink black sky. Something panicked in my chest & I cried for hours, missed my stop on purpose, lunatic grinning from between my wet fingers.

Winter is the season of wanting everyone to look at me. To watch me stand & shake the flies from my back, to watch me leave without language or reason. Each year, I think I have finally outgrown youth’s obligatory madness. Swear I will never fall in love again with a hand that always gives me what I ask for.

But there’s someone on fire in the attic & no one knows how she got there or where she came from, but it’s simple really. See how we’ve left it so far behind us? The lake? The bird? The apple? The horse? Most of the time that’s all there is—we leave, eat a nice dinner, go back to our hotel room & fuck. Simple.

Until the image breaks & suddenly you’ve killed an entire island of horses. Suddenly childhood slams shut & it’s all your fault. I was sprawled in your kitchen, the animals moving through the blood in my hands. I held them out to you like fruit. I think they were beautiful. I think I was glad we’d driven to Virginia & fought the whole way. I think I owe you an apology, I think I must have loved you, I keep rewriting this story, who are you? A bird? Or a boy? Or an image of a boy with frantic wings, trying to outrun my changing weather?

I try not to write about these ghosts.
As if this too does not turn a child

to narrative. As if this too does not
demand a kind of work. But boy

& have you ever known a body
to not be haunted? Ever known

a black body to not be riddled
with stars?

here’s a door opening in the poem.
Here’s an exit. Walk through.

My great-grandmother was named Violet.
Violet. She had six sisters, a garden

of black girls. Imagine naming your girl-
child for a flower. Imagine doing this

over and over again. Imagine a flower,
how easy to ruin for want of a little color

to decorate the kitchen. Imagine tearing up
handfuls of blossoms. Imagine pressing them

into a girl’s dark shape, to say this is you,
this is what the world has made of you.

Now imagine she lived
& she lived.

Once, I was a girl
who took a black boy’s name

into her mouth. I don’t know a thing
about bullets, but I sure do know

You load the needle & do not cry as it passes through you.
You take the pills & never cry again.

& yes, you're trying to make yourself a desiccated planet.
That's why all the medicine leaves you dry
and pitted. That's why the pit in you
you do not tend.

Years ago, when all of the women in your family lived in the world
outside your body, you stood in your grandparents' garden
washed by rain after months of nothing & nothing
was alive, but remember your amazement at just how much
a ruined world can hold?

Today, your father tells you his friend has died
over email. He must think you don’t remember
the scorch marks on his dresser, that once you left him alone
with his murderous grief & he had nowhere to put it but back

into his body, but back into the apartment
where he lived beside a man just waiting to die.
So of course he let it burn. Of course
he let the damn thing burn.

& something in you opens
for him to lay her down in the dead center
where you hold everything
that no one wants to touch.

But what if we begin in a different summer?

What if the tomatoes had been sugar red
& your grandfather had still moved with time?
What if he handed you tomato after tomato
& you carried the fruit to your grandmother in the kitchen

& she hadn't looked inside you yet
& seen how wrong you'd grow?

Yes, you like to think there is a life where you call your father
& offer him something just like that—sweet & simple & alive.
Instead, here you are, trying to drink his sorrow
through the screen, trying make yourself a grave

Sometimes it dampens the fire. Sometimes
it keeps the furniture intact, sometimes, at least,
it keeps you alive. But no one lives in this version of the story—

there are the dead & those who house the dead
& then become the dead & what a shame
it is, what a pity. What a way to love.

Cam Awkward-Rich is a Poetry Reader for Muzzle Magazine, co-facilitates The New Sh!t Show -- an all new poetry reading series based in San Francisco -- and has represented the Bay at two National Poetry Slams. You can find Cam’s work in Muzzle Magazine, Revolution House, and The Bakery among other publications. You can find Cam on public transit between Oakland, where he lives, and Stanford University, where he is a PhD candidate in the program in Modern Thought & Literature.