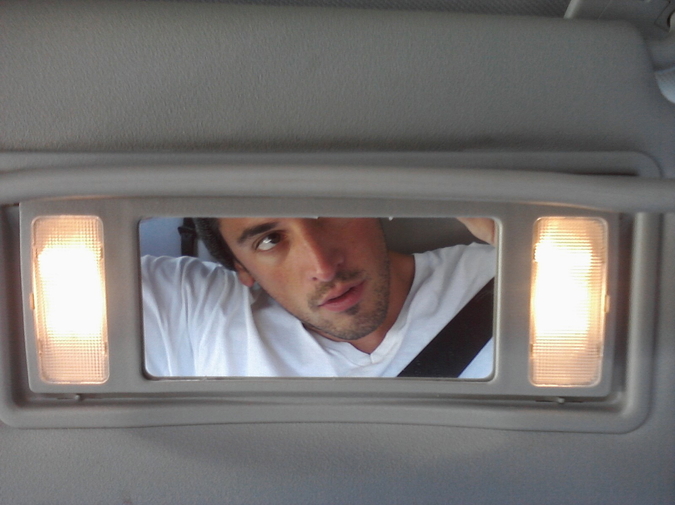 Last Night at the Electroclash

Some one said tech kids are really just
Bros who couldn’t play football. My wingman
Took so much shit in Fallujah he doesn’t even have
Facebook. Hipsters at least make a feminine space
And they can fucking dance, said the girl in a Sharks jersey
Fuck Buttons mashed with Mozart. Everyone wants
To shake it when you’re peaking all day and the cabs
Won’t stop for you. Minuets aren’t the best jams for
Getting girls to share your sleeping bag but then again
Neither is grindcore. Too many ginger ales and I might even
Go home with an old man in a leather vest because who knows
What is waiting on the other side, really. Not me
If you spent your whole life just smoking on the corner
At least some deep neon noir architecture would sink
Into your muscle memory. And all those synthesizers
Traps and pedals and foot covered booms
Would play new songs just for you and yours and
Everyone in the joint would blink at you and say
See that guy, whatever he’s on, I want some

It was so hot on the pavement when I slouched by the opera house
The Pride Parade preparations in full swing, funnel cake and waxed ass
The Giants fell behind the Rockies but I have bigger fish to fry
Picking my own olallieberries as a farmer reads Nox in some redwood shade
Inside the sexy exuberance of the civic center the main library is cool and quiet
Sometimes the call of the wild leads you strange places. A bum rocking
Houses of the Holy on her headphones so loud Bonham’s toms
Bounced along the reference section where I was reading Nice Weather
And looking at Garry Winogrand before heading to Yerba Buena to
Get high and eat fro yo with all the cool kids. I have to pack up all my shit
Every time I need to piss coz I’m rich and I don’t trust these fuckers
They definitely don’t wear Old Spice, like I do. The heat wave
Reminds me of some southern exposure. Sunglasses, amphetamine
Neglected masterpieces in a hammock where her skin was sticky and
She smelled like something I couldn’t name and couldn’t stop looking for

German baroque on the radio but the coyotes are early
Howling through hours not so very wee. The last fly of summer
Circling my lamp, like a flight delay airport pickup
The garden hose on the gravel and my NHL subscription
High school chess club and buck season opening weekend
Neon and camo. Ten points on the hood of a gold F-150

EDM at the food sovereignty conference, some girls at a
Gallery sipping mulled wine but I’m flying solo. Not flying
Just solo. If only you could unscramble an egg. I wore
Your Bolivian coat to an outdoor metal jam but I wasn’t you
I didn’t jump off a high thing or draw the ardor of strangers
Close enough, fiddling with the pockets while my houseplants
Seem to fare better when I’m not around. Fuck them anyway

If only emotions were COD and rear differential was one of
Newton’s laws, or maybe the fifth noble truth. As it is, better
To let it all hang out. No reason to add even more mystery to
An already mysterious world. The firm joy of comprehension is
As great as the numinous sense of eternity or whatever it’s called

Shit isn’t hot for long, I’m talking to you IPO crack heads all
Wired in. If only I could peg my currency to the Chicago Blackhawks
Call it austerity. If some wonder drug could be my own IMF what
Would be my security council? All I know is compression breaking
Is like learning what you never knew you needed you had all along

Joshua Willey was born in Oakland, California and lives in Bend, Oregon. Some of his work can be found in Adbusters, Opium, Stumble, and Birkensnake. He's currently translating Liang Shiqu and preparing a novel about hitch hiking. When not reading and writing he works on a farm.