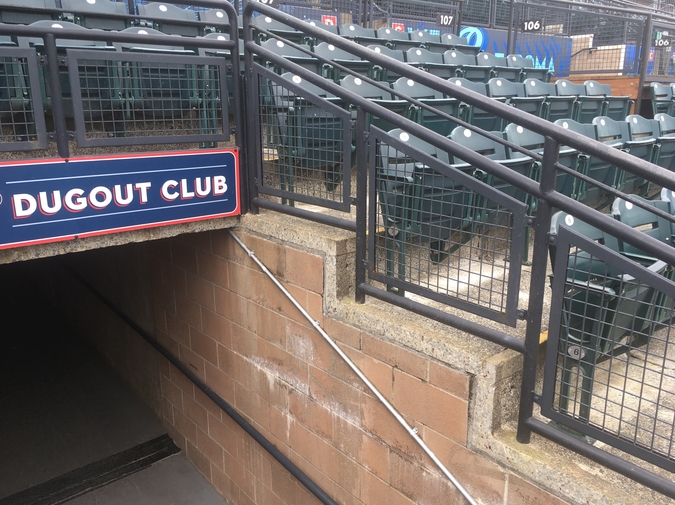 For the Journeyman Third-Baseman Playing for the Clinton Lumberkings

“And what good is a dream finally?” – Steve Scafidi

If you go down to the field
when no one is there, not even light,
& stand alone knowing full well
the immensity of your alone-ness, it might
be easier to remember the dream.
Every minute a car to your west
silently parades its headlights down 67,
past Shaffton, Davenport, Muscatine,
& on your east the great wide rushing
of the Mississippi gathers like fabric
in a hand before it eventually becomes
the ocean. It spills out, the river does,
& becomes something greater than
itself. & you? You’re here, a short walk
from the motel, the only friend
of fireflies, about to finish a three-game
series against the Kane County Cougars,
picking the dirt field’s grit from underneath
your fingernails as you wait for the sun
to rise. When it does, it will char
the already charbroiled grass to brown
while outside the small litany of fans
turn spray bottles upon themselves,
trying to stay cool until night falls
& the fireworks above the stadium
seem to explode from the sky itself—
that hot & charged dark—as you sit
inside the dugout, the tobacco’s wad
moving rhythmically in your mouth,
waiting for a call, any call, to pull you
from extinction’s orbit & say it is time,
my friend, to take one more step up
the ladder of ascension, you are so close
to becoming holy. But there is no call other
than the manager’s order to return
to the motel & pack up what you have
decided to take with you. The bus leaves
for Grand Rapids in two hours. It goes
on like this, this walking out into night,
this returning, this playing under high
heat of noon, this mindless swinging
& cracking against the cowhide, this
small child beaming as you sign his ball,
this beginning that never ends, this
trouble with the curve, this glove turned
against the sun, this festival of mascots
running round the bases, this t-shirt
toss, this hot dog cannon’s blast, this faith
in superstition, this lengthening gap
between each forever-less-fervent phone
call home until the hole that comes with
missing home is filled with a wondering
if home is simply any place other than
where you are, yes, it goes on like this
until you remind yourself to stand alone
in a place without light to see if you
can remember the dream. You stand
with Lake Michigan to your west
& Grand River off your shoulder. You
stand in Appleton, Wisconsin, outside
the empty pool that marks the fifth
Quality Inn in as many weeks. You stand
in Peoria, in Beloit, along the potholed
highway that runs the long road down
the Mississippi. & you scream. You scream
until the screaming hurts & you grow
as silent as a long fly ball arcing through
the air, necks strained as it ascends.
What good is joy if, in joy’s endless
pursuit, you become joyless? A hacked
spit of chew. A bat, tarred & feathered.
Time makes a mess of most & turns
the rest into what is timeless. When I
watch you again from my seat off the third
baseline under a July sun somewhere
south of Janesville, I see the dust scabbed
on the hard edges of your hands, the way
you have given up making yourself
presentable for the dream. I want to say
something but instead I sip my beer
& watch as a father lifts his child
upon his shoulders so they might
glimpse all of everything all at once—
the sun’s melted haze, the ever-fading
red ads for small diners littered along
the fence, the way you shield your eyes
from the light when the fly ball ascends
& begin to turn your gaze skyward, where
everything is blue & beautiful, the ball
lost somewhere among the wide & bright
aisles of your dreams, & how you search,
& keep searching, until you find it.

Ode to Mike Cervenak, Who Gave Me His Broken Bat When I Was 11

Sifting through the names
of old minor league players, gnats battered
to the broadside of a massive windshield,
I find yours, & remember the way you called me,
chubby & 11, after the game,
your broken bat in hand. I didn’t care
about its splinters. What good is a dream,
anyway, if not shattered at least once?

Those years for me are a dream of years.

My father took my brother & me all around,
a family of journeymen. Aberdeen,
Bowie, Hagerstown, Frederick — we followed
the routes of old & rattling Greyhounds
until we found the players they carried
playing on ballfields littered with ads
for businesses that didn’t exist. A home run
through a small hole in an old sign could win
the crowd an ice cream cone from what
had become the office for a lot of used cars.

What I mean is that, in a place
full of what had once existed, I said thank you
& clutched the bat tight to my body,
not knowing you would spend the rest of your life
only dreaming of the big leagues, not knowing
I would become, one day, as old now
as you were then. You seemed a giant, Mike.
Big enough to house a dream & large
enough to see it through. What can I say now

other than love? I loved. You loved. I still
love. You, still, too? & maybe something

about where love takes you, strung out
& drifting, along pot-holed highways & past
the artifacts of old lives, into that space of mind
that whispers why the fuck are you doing this
until you fall asleep & wake up trying to remember
the last question your day asked of you,
& realize you’ve forgotten.

It’s good, I think, that we forget.

I still have your broken bat. A decade & a half later
it smells of pine tar. I want to say something beautiful
about everything nobody knows about everyone.
That inside each wide-eyed & seeming-kind stranger
is something chased or fallen by the roadside.

For a long time, Mike, I wanted you to make it
so what you gave me would mean something
more than it ever could. I know now
I was wrong. My father drove me miles around
to watch a thousand men better at this one game
than anyone else fail at becoming the best.

Tonight, I turn the broken bat in my hand.
Your name is there, engraved like an ancient
high school plaque. & I am not now who
I thought I would be then. & each year
my father turns a little slower in his car
or pauses a second longer than he should, & I
resist the urge to hold him closer than I
ever have, to say it’s okay, you did your job
better than anyone will ever know. But I don’t.

Devin Kelly is is the author of the books Blood on Blood (Unknown Press), and In This Quiet Church of Night, I Say Amen (CCM), and the winner of a Best of the Net Prize. He is the Interviews Editor for Full Stop and co-hosts the Dead Rabbits Reading Series in New York City. He works as an afterschool director in Queens, teaches at the City College of New York, and lives in Harlem.