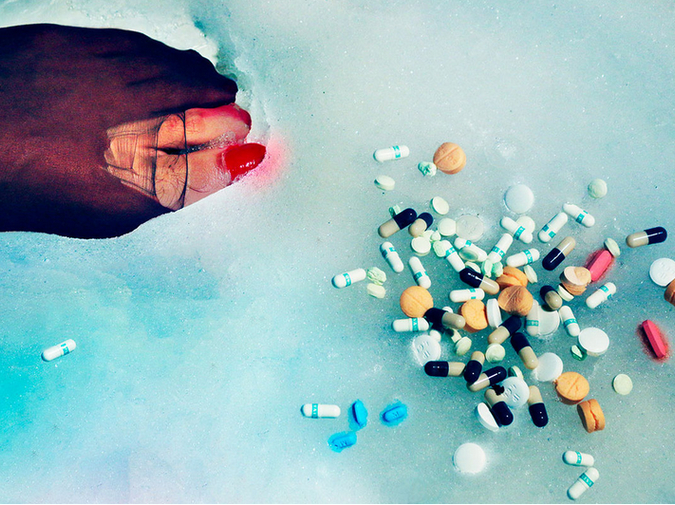 After Your Margaritas
For Jason Koo

At happy hour he compared you to Carrie Bradshaw and
you thought this was funny. You don’t write

when he orders you a shot of Patron instead of Milagro
like you had asked. “It’s all tequila”, he says, and now

you’re offended. Where you come from, tequila
is directly correlated to your friend who is back home

in California. She calls you once a week
just so you can tell her that you’re making margaritas

and over quartered limes and triple sec. You tell her
you miss her mom

even though you only met her once, and how no one
in New York substitutes Milagro into their margaritas

at an extra cost. You both laugh because the city
is cheap when you don't know your tequila.

He asks why you won’t do a shot of Patron with him,
and you tell him your heart just isn’t in it.

So you leave. You end up at a bar in Murray Hill where
you really start to feel like Carrie Bradshaw circa 1992.

Your short blonde hair dusts your collar bone
while you flirt with the self-proclaimed entrepreneurs.

You believe that they’re successful just like they believe
you’ve never heard their pickup lines before:

You’re a poet and you didn’t even know. Write a poem
about me. You try to stomach their words like Patron

but you know their tongues are still spelling them
incorrectly. You just want someone to talk to

without having to pretend like you’re going
to sleep with them. You want to stop

ice-cream anyway. These are the types of things
you think about on your train ride home

the next morning. How you’re still wearing
that black dress from last night and how everyone

on the local train back to Bronxville is looking at you
like you’re hungover,

which you are. Your head is full of the same stale
hopes as last weekend. You look down

who was acting like he knew who
Sarah Jessica Parker is.

“What’s next week look like for you???!”
Three question marks

followed by an exclamation point. You want to be honest.
Tell him you’re watching Dirty Dancing alone

because you hate that he ordered for you. That you never
want to drink tequila with people you barely know

ever again. Instead you type, “Living the dream”, then hit
send without really thinking about what his response might be.

“When would you like to get drinks again?” lights up
your palm and you wonder about what type of message

will make him understand that you’re not interested.
You try to find the line you need to walk

in order to cut your losses without really cutting
your losses completely. You decide it's better

to walk a thin line rather than to actually cross it.
The thinnest line you know is your middle meanest.

which is not your version of companionship.
You call you friend in California but

she doesn’t answer because her sleep time
is different. Last night, I had a dream

about salsa flavors. You’re mumbling. Trying to choke back
throat-tears and simple syrup. I guess

it doesn’t matter, you whisper. But you know she’ll call back
the second she hears your voice splinter.

and cilantro without first mentioning
the type of margarita you were drinking.

You're going to steal my glasses tonight
but I don’t see it coming yet. You're building
a shrine for Mother Mary then crawling under
a pew-looking chair so you can feel
fetal again. I’m not sure if growing up
Catholic was in our best interest. Have you
lost interest? You did
say you would marry me and I’m
starting to count my thoughts
when I think about how we should
commit. At least for a short while
just to see how we feels. We can end it
neatly. The same way you order your whiskey.
I won’t allow it to be as pretty as Brooklyn
or the streets of New Haven but
ugly ducklings don't judge feathers, right? I want you
to think about counting your thoughts
when I'm nude. When I am nothing
but a bitter-sweet hodgepodge
of cherry-coated nipples too sharp
for your politician tongue. Stop slurring
margaritas on the rocks without me.
You were never this salty.
God hasn’t been on my lips since kindergarten
but I’ve always been a bruised plum almost
pruning. Sometimes I whisper on my knees
at bedtime and pray you weren’t the one
who dried me out.  I’m clothespinned
to this purgatory and I’m not expecting to defy gravity
in this life. Your purgatory is still me
waiting for us to stop spooning naked until
we feel dewy. Daybreak will always continue
to chip away at the New York City skylines,
and the wolfhounds
in Connecticut will keep calling me back
until you decide you can no longer warm my feet
with the softest skin of yours.

Rachel Corso received her B.A. in English Literature at Quinnipiac University. Her poetry has appeared in Helix, Broad, and temenos. Corso currently works full-time at THINK Global School, writes miscellaneous content for Lumina, and attends Sarah Lawrence College for her MFA in poetry.