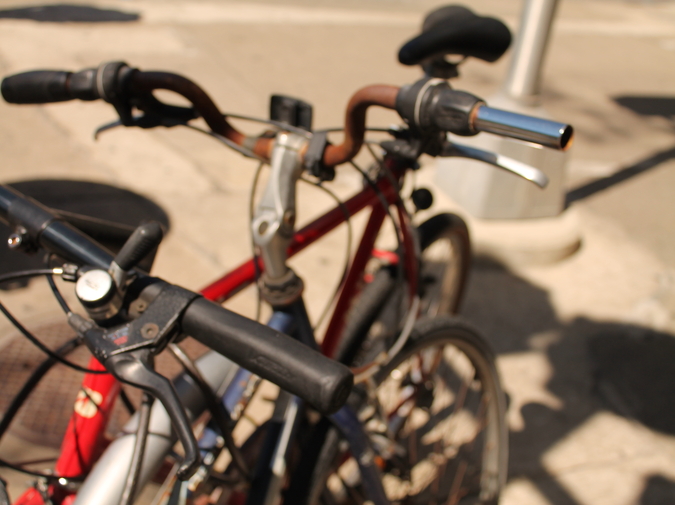 You push your bike
on the worn pathway
into the bushes.
You enter my apartment
with chocolate cake
and colorful birthday hats.
You put one on my head
and say:  “I want to fuck you
while you wear your hat,”
while looking at my forehead
and not into my eyes.
After you leave
your husband’s house,
you always have
the same expression.
We don’t talk
about this, we pretend
as couples do.
We go to the bedroom
after cake.  It is early
fall, and we lie in bed,
listening to the hum
of the window fan.
We never untangle
our arms and legs.

My dad had a scar on his shoulder—an inch of puffy flesh that shined like a pink marble. I was a boy when I first saw it. He took off his tee-shirt after mowing the lawn and wiped the sweat from his face. He sat on the front porch. I tried to pop it. I thought it was a boil. It was too hard to dig my finger into. I was stabbed in Nam. He brushed my hand from his shoulder. I was the last man standing in my platoon. Then, out of nowhere, I was surrounded by Gooks. I fought them off but not before one stabbed me. But I got him too. Then I waited for rescue. I spent a day and a night hiding. I imagined him, a newly minted war hero, hiding. His forehead and eyes bobbing up and down in a dirty river like a crocodile as he waited to make his move to safety. During recess, I told the story to my classmates. In my version he saved his entire platoon. Your dads couldn’t have done it, I said.  A punch was thrown by Jimmy. I dropped like a dead Gook. My dad’s a hero, Jimmy said, and kicked me. I stomach-crawled behind an oak tree, held my jaw with my hand, looked around the big oak that dwarfed me. I scoped the playground for a passage to the school entrance. In math class, I thought of the story I would tell my dad. How I rolled across the dirty and rocky playground, my fists swinging at the class bully. That I’m a heroic soldier like him. At home, with my swollen eye and dirty clothes, I said, he tried to take my lunch money. Everyday he tried. He put his hands together and massaged his palm with his thumb. His callused hands were un-sanded lumber across my arm or shoulder when he touched me fatherly for encouragement, something good I’d done. I was slouched on the couch. Sit up straight, he chimed in, breaking my trance. I pushed myself up with my hands. Go to your room, he said. I slumped my shoulders, dragged my tail to my room. There is always punishment, he said, and grounded me from going outside for a week. Each night he came in and took his index finger across the dusty surfaces of my bedroom and handed me a bottle of Pledge and an old sock to clean with. As a teenager, I went camping with my uncles.  They told stories about their father. They laughed when I told the story of my dad’s scar. Nam? He was stationed in Berlin. A bar fight they said.  He picked a fight with a larger, drunker man. Just picked your dad up like a bag of trash and threw him through a table. A broken pint glass gashed his shoulder. I touched the inch scar on my arm—a dog bite from when I was eight. I thought of stories I’d tell.