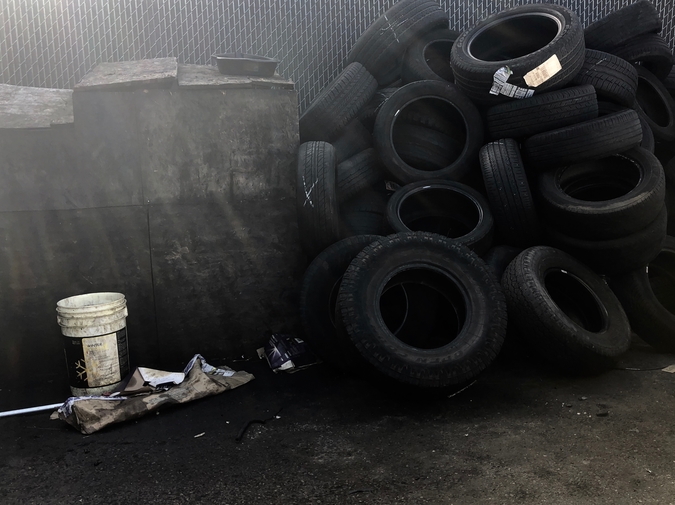 For as many hours per day as I was allowed to be online, I posted in the Prodigy forums for sports, music, and “teen interests,” and I came to view two other regular posters as nemeses. They didn’t know they were my enemies until the day I was banned from the forums. One posted mostly about heavy metal and idolized Trent Reznor, even changing his display name from Dan to Trent in homage. I envied him because he was a few years older than me and he’d boasted about having girlfriends and said he listened to Nine Inch Nails during sex. I was at the age when I believed anything an older kid said about sex, even if  they referred to it as “bumping n’ grinding.”

There are several people on Facebook now with his name, but only one who wears leather jackets and has shoulder-length hair and is sharing Nine Inch Nails and System of a Down music videos. In the most recent photos, his weird goatee makes him look like a guy who would do magic on the street. He has a full sleeve of tattoos and is working on second one. He enjoys drinking Yuengling with his buddies and holding guitars in front of various backdrops. He appears to have done some musical theater in high school.

I spent almost an hour scouring his page before registering that his name was followed by “Jr.” I had wanted it to be my old Prodigy enemy because I felt a strange connection to this guy, the first I’d ever fought with online. But he’s too young. The West Side Story pictures aren’t throwback images; they’re from when he was in high school in 2009. This kid is young enough that he could be my son. There is only one picture of him with his parents, who appear to be in their early forties. His mom looks like she grew up on the South Jersey shore, and used to wear toe rings and sit on the lawn at Red Hot Chili Peppers concerts, drinking Gatorade spiked with vodka. Dan Sr. looks a guy who owns a stucco company, and who complains about how the new cell phones are too confusing. If this is the guy I knew in the 90s, I bet he keeps an iPod loaded with NIN songs in his car, and on nice days he rolls the windows down and bangs his head to March of the Pigs and tries to transport himself back to those teen years when anything seemed possible. I thought about sending Dan Jr. a message to ask if his dad remembers Prodigy. If he remembers his login info (my username was MEBD92D, a sequence that flows automatically from my fingers). It might not even be him in the picture, but I want it to be him.

My other enemy was named Pete and his last name is unusual enough that he is easy to find. He’s in his late thirties and runs a podcast consulting business—which I now know is a job a person can have—in addition to a variety of side hustles that all fold into something that might be labeled: life coach or thinkfluencer. That he hasn’t done a TEDx talk yet is the most shocking thing I’ve learned. His online presence is relentlessly cheery and he posts things like, “You need a clear and actionable road map to achieve your goals.” He promises to, “Enhance your thinking” and help you cut every wasted minute from your day. You will, “Find your inner power” following his patented steps. He brags that his, “Work has enriched many Fortune 100 companies,” which I am aware is a thing some people value.

I am skeptical of all people in this weird field of non-work, this zone that exists between people with jobs and the people who want to fire those people. It’s like being a self-appointed hall monitor. Any system that reduces people to their productivity hours is a diseased system. Fuck maximizing your productivity hours. The whole industry of making people feel guilty for not doing enough work is nauseating. It kills people and then tells them it’s their fault for dying, and then sends a bill they’ll never be able to pay.

It’s not fair for me to dislike Pete now. He may have helped a lot of people. He may be a kind man and a good citizen. He’s just trying to survive, and he found that he’s good at this thing I neither understand nor respect. I despised him 25 years ago because he was constantly needling me, undermining my comments, pointing out typos and grammar errors. He crossed the line when he called me a “poseur,” which at the time was the greatest insult I knew. He said I was just pretending to like Metallica to fit in. Dan/Trent chimed in to agree. So I had my first-ever online meltdown.

The subject was “Peter [REDACTED]!!!” and the message was over 500 words long. I used the word “pussy” (spelled like this: Pu$$y) several times. I told him I would murder him if we ever met. I posted it before I went to bed, and overnight my dad got an email saying I’d been banned. He printed my post and highlighted every profanity. He wanted me to know my mom was disappointed to see me using this language. At times like this, I wished I had a dad who would just yell at me instead of asking me to explain the stupid things I’d done.

Because my dad had a longstanding interest in computers, we were early adopters of most technologies, so I was banned from an online message board before most people in the world had ever logged on. I feel like being a veteran of these kinds of battles gives me some kind of credibility, but I’m not sure what to do with it. Much of my subsequent life would be spent engaged in new fights in various online forums, from AOL chat rooms to private message boards to all manner of social media. I rarely fight online anymore, but it took 20 years of wasted energy to get here. Still, I devote an inordinate amount of time to learning more about each new awful person the internet presents to me, even if it’s some guy on Twitter with eight followers and a tenuous grasp on how to write a sentence. I’ll spend an hour reading through all of his tweets. I’ll screenshot the worst ones and save them, just in case. Exposing myself to the dumbest ideas and the most hateful weirdos online triggers a chemical reaction that gives me pleasure, or something like it. A hoarder of bad ideas, stacking them all up into wobbly piles that might someday topple and crush me.

Around the same time as my Prodigy ban, I had cultivated an intense real-life grudge against the other Tom in my class, who was more popular and more athletic and richer. He had a treehouse with a zipline that ran to the other end of the yard. We were always competing for the best grades, and in 5th grade he had won a spelling bee in which I’d finished 6th after panicking on a question. He never did anything specifically to hurt me, but I viewed every good thing that happened for him as an insult.

When I won a limo ride through a school raffle (I’d been entered because I sold seven magazine subscriptions in one of those bizarre fundraisers that turn kids into door-to-door salesmen), I invited him instead of my best friend to be my plus-one, a popularity power play. The theory was: I give him the limo ride, he decides I’m cool too, and then there is a ceremony to declare my coolness to everyone. Just by existing as a popular person, you get free things handed to you. We were supposed to drive past our homes, flaunt our fanciness, and then get lunch from McDonald’s while our classmates stayed behind, learning about gerunds and envying us. The limo couldn’t get down my narrow street safely, so we drove past a nearby intersection and honked the horn. Tom’s road was wide enough, his house big enough, that we crawled past while his mom stood outside and waved. My McDonald’s order was all wrong—I wanted a plain cheeseburger, but I got the sauce and the pickles and everything—so I took one bite of my burger and threw out my fries out of spite. I never became popular, and I blamed all of this on Tom. He follows me on Twitter now, and I can see he works as a producer on a radio show for a particularly odious Fox News personality, which is to say: I might have disliked him unfairly, but I wasn’t wrong. Most of my enemies have never known they’re my enemies, but that doesn’t make the fights we’ve had any less real.

Tom McAllister is the author of the novels How to Be Safe and The Young Widower's Handbook, as well as the memoir Bury Me in My Jersey. He is the nonfiction editor at Barrelhouse and co-host of the "Book Fight!" podcast. He lives in New Jersey and teaches at Temple University. Find him on Twitter @t_mcallister.