Chased by the Muse, Part 3 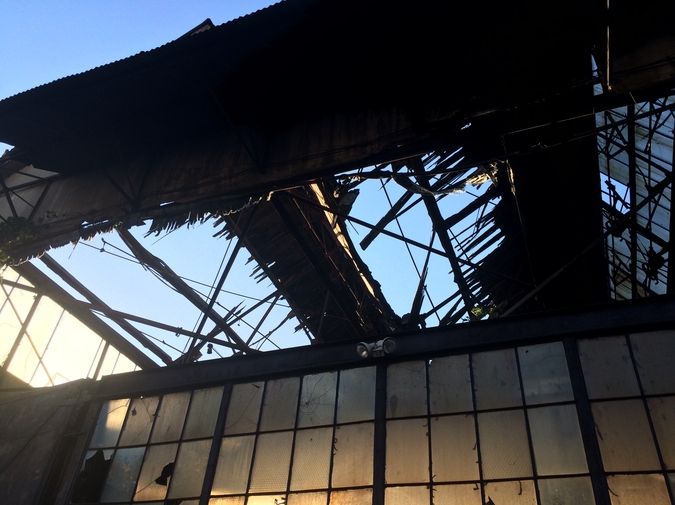 For all the hours we’ve spent with strangers, all the conversations and shared stories, we ask no one’s name—until now. Sarah and Travis and their baby girl squeeze into our back seat when we leave our hotel before sunrise. We ask about their jobs, what they like to do when they’re not escaping a hurricane, but getting to know each other is ancillary to our quest, and mostly we ride in silence.

There’s a part of me that wants to be asked about my novel, or even our children, and glancing over at my husband, I can see his own inner monologue floating behind the great unsaid. But we don’t volunteer anything. Maybe we hold back to preserve personal space, because for days, we have had almost none. Maybe the only thing that matters now is getting home. We are nobody to each other, and yet we are everything.

Sinaloa is greener than we imagined, with aurora haze hanging over fields. Rosy-fingered dawn arrives and passes before we notice we’re at half a tank; when we come to a tollbooth hours later we are still twenty-three kilometers from Mazatlán. We ask the attendant how far to the nearest gas station. Mazatlán, he says. Do you think we can make it? we ask. He peers at the dashboard. Shrugs.

We slow down, turn off the A/C, and pretend it isn’t in the nineties outside. Twenty protracted minutes later, we roll into a gas station. We fill up, decline a six-man car wash, and head to the airport, praying to the rental car gods as we go.

We drop Travis, Sarah, and their baby off at the airport and drive to the rental car return. We find a shady spot and attempt to clean our filthy car with a 1.5-liter water bottle and a Wal-Mart washcloth. We present our remaining food as a peace offering to the minor deity who controls our fate: Hola, Mr. Alamo clerk! We’re returning our car hundreds of miles and a ferry ride away from where we were supposed to. Want some canned goods?

His eyes widen and then he smiles, impressed. He pulls up Facebook and shows us pictures of destruction: a slumped man, surveying the collapsed roof and two cinderblocks that used to be his home. A woman holding a baby above her head as she piles her few belongings atop a soggy mattress. A broken bridge diving into a muddy river.

We are still waiting to be asked for our credit card when the clerk tells us to have a nice trip. I think about my friend, our modern-day Athena, who is “praying us home.”

We order celebratory margaritas at an airport restaurant, check our phones, and wait to board. It’s a different kind of waiting—the waiting of normal life: a relief.

When our plane takes off, we hardly believe we are going home except for the land passing beneath us. Below us, Mexico becomes smaller and smaller, a mass of memories under a blanket of clouds.

An American guy next to us says that the U.S. media have been minimizing the damage in Cabo, and that the government didn’t send enough help because they didn’t know how bad things were. We don’t say what we’re thinking: how strange it is that a government that can track our cell phones and tap our emails somehow doesn’t understand that 30,000 of its citizens can’t get home.

We’ve never been so happy to see the unnatural expanse of golf courses, tract homes, and industrial-strength rooftop air conditioners that is Phoenix. We spot a water fountain and take a big drink just because we can.

Heading to customs, we call home and video chat with our kids. Our two-year-old son looks at us, wide-eyed and serious, and then breaks into a grin and rattles off a collection of syllables that might be about Legos or his sister or the garbage man. Beside him our baby girl giggles.

Then the unbelievable happens—again: the doors on the far side of the room close. Conversations crescendo and the air swells with an unnamed panic. A security guard stands on a chair and addresses us, her face a mask. The airport is on lockdown; there is a “security situation.” After all this, we are almost unsurprised; every day feels like another punishment from the gods.

While other passengers show impatience and irritation, the Cabo refugees are easily identifiable by their sunburnt brows, wrinkled clothes, and shell-shocked stares. Some flew through Mazatlán like us, others through Mexico City or Tijuana or Monterrey. Everyone has spent the better part of the week trapped in a room, a hotel, a country.

The hours tick by. Airport workers hand out water, snacks, and toiletry kits, and our morale craters. We recognize this move. We’ve already played this game, and we didn’t like the ending. Once again we are trapped in the underworld. A customs official says, You poor people.

We learn online that a man who attempted to shoot a cop is now loose in Sky Harbor.

I can’t believe this is happening, a weather-worn man beside me says.

I hope the cops kill him so we can finally go home, a woman says loud enough for a dozen passengers around her to agree.

I thought it was a car chase, another says. I heard he’s in our terminal. He made it through security with a gun? I heard they chased him through the parking lot. How hard can it be to catch one guy?

And then the doors open, there’s a mass jolt of adrenaline, and we yank our rolling bags down the hall like dogs off leash.

Upstairs in the terminal, it’s a 500-person scavenger hunt; the prizes are finding which flights are still going out, where the new gates are, and who can get rebooked first. But we don’t win any of them. We settle for a flight the next morning and a hotel room the airline won’t pay for.

We collapse into the most comfortable bed we have ever slept in—or perhaps we are just that tired. By now, lodging quality is almost irrelevant; there’s no novelty anymore. It all blends into one mental slurry of Not Home.

My sister-in-law, a doctor, once said that the best feeling in life is relief from pain. Boarding the plane Friday morning, after a week of second-guessing, bleeding money, and missing home, I know what she means. During every part of this journey, we have been too afraid of the next thunderbolt from above to let ourselves relax—until now.

In the row behind us, a Mexican woman describes her last terrifying night in Cabo, how she barred her door against men with baseball bats and guns. Looting. Raping, she says. Raping? I think, wondering if it means the same in translation. She has just one small bag, and does not plan on going back.

Below us fog nestles in the Santa Cruz Mountains like sea foam on the shore, and suddenly, home is a simple thing: a landscape below beckoning like an old wooden banister, waiting for us to run our fingers along familiar grooves. I wonder if for this woman, it will ever be home.

Sarah’s parents are waiting for us in the San Jose airport. Her dad readies himself for a handshake, but I push in for a hug. Thank you is an inadequate phrase for someone who spent $1,200 to get two strangers home, but we say it anyway.

Outside, I’ve never been so relieved and happy to see my father-in-law: when he pulls up, my husband runs down the sidewalk like he’s seven, not thirty-seven, and hugs him. But his dad is focused on processing the immigrants; he gives his usual three-pat hug, not sensing the storm we’re holding inside.

This is the distance between survivors and outsiders: we needed him to tell us with his arms that we were home, that it was all over, but he had no way of knowing. (With my mother-in-law, we didn’t give her the chance—we just didn’t let go.)

When at last we hold our dark-eyed children, they are warm and soft and smell like comfort. We had expected them to resent our absence, but even our son, who never wants to be cuddled, crawls into my lap and settles in for a story.

We spend the weekend returning to everyday rhythms: folding laundry, changing diapers, officiating time-outs. We can almost pretend that our Mexican odyssey never happened, except for the exhaustion embedded at the base of our necks and in the bottoms of our feet. We say we need a vacation from our vacation, but make no plans. It is enough to be home.

Odile Survivor Facebook groups sprout up. People claim PTSD, recount recurring nightmares, post aftermath pictures. Some waited in a mile-long line at the Cabo airport without food, water, or shade—only to pay $600 to get out. Others took a 30-hour bus ride to Tijuana, or went to the La Paz airport and slept on the concrete. It’s a litany of choose-your-own-adventures, most of which ended worse than ours. It’s the first tangible affirmation we’ve had of the course we charted.

People compare hotel or airfare refunds like boxers comparing scars. American and Alaska Airlines are refunding return tickets; United is hanging up on passengers who ask. Some of the resorts give full refunds; ours sends us a voucher for one free night at the Westin in Cabo. A month after our return, Alamo charges our credit card $480 with no explanation.

But there are other stories, of Mexican military who brought water to the sun-parched refugees. Of La Paz locals who showed up with hot meals. Of strangers now planning reunions.

We wonder how many times we will tell our tale before we can lay it down, modern mariners groping for understanding through repetition. What do you think it means? my in-laws ask us. What does it ever mean when nature turns against you? I want to reply.

Within days, Cabo disappears from the news. I search for signs of life after the media cycle, but mostly find reports of damage to celebrity homes and resorts’ scheduled reopening dates. Odile cost Mexico $1.1 billion and fifteen lives. The surviving Cabo residents are an afterthought.

I think about our first day in Mexico, when I stood on golden sand, looking for more than blue in the horizon—and asked myself why I bother telling stories. I wanted to catch the inspiration that had eluded me. Instead I was hounded, chased in a race I didn’t win.

And then as I tell my story once again, it hits me: the muse wasn’t silent. She screamed in the winds of the hurricane, sang as we sailed across the gulf, whispered under the airplane’s white noise: stories are not the stuff of fiction or fantasy, they are the stuff of life. They align disparate memories of shared moments, ask questions that don’t have answers, pull meaning from the meaningless.

Stories show us the monsters we can become, or the heroes we can aspire to be. They give us a mast to cling to in the storm, a path to travel in the dark, and a map to find our way home.

Laura Joyce Davis won the Poets & Writers Exchange Award for fiction in 2013 with an excerpt from THE LOW-FLYING DOVE, her novel-in-progress (the product of a Fulbright scholarship). She was a Kimmel Harding Nelson writer-in-residence (2014), a Pushcart Prize nominee (2009), a Best New American Voices nominee (2006), and a two-time winner of the Mills College Prize for Graduate Fiction (2005 & 2006). Her work has appeared in Runner's World, Shape, A Cappella Zoo, and elsewhere.

Nate Davis is an ad copywriter and editor by trade; this is the longest thing he's written since college. Find him online as @iamnatedavis.