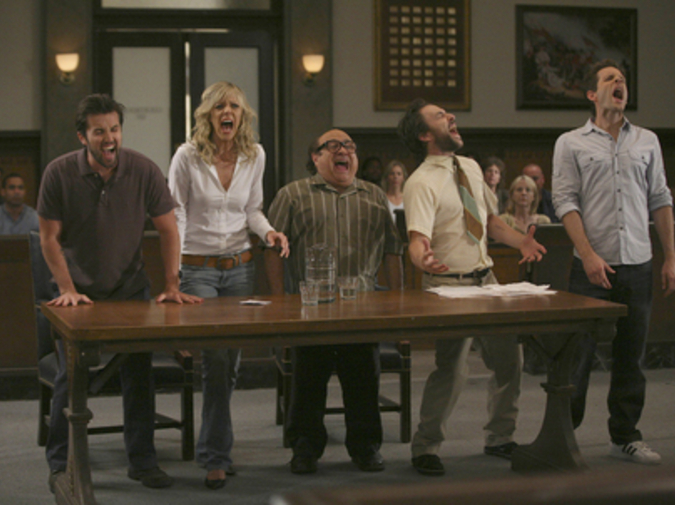 1. If you took Seinfeld and made every character as eccentric as Kramer but as full of themselves as George and then added Danny DeVito but then made it as hectic as Workaholics you would probably get It’s Always Sunny In Philadelphia.

2. Kaitlin Olsen is the funniest female comedian. Ever. And that’s not up for debate.

3. I promise you will run an extra 3 minutes on the treadmill so that you can finish the episode you are watching because how else will you know if Mac and Charlie ever get out of the bottom of the empty pool or if Dee actually makes it onto the Philadelphia Eagles football team?

4. It is the ultimate boredom relief/instant-happiness-maker.

5. When you are finished with the current 83 episodes you will feel like you have an intimate bond with at least four of the five main characters.

6. You will cry from laughing. Probably more than once. And most likely when you first hear Danny DeVito’s accent when he says the word “whore”.

8.  You may or may not decide you want to open a bar with your buddies or that Philadelphia is the coolest city ever so you should probably move there.

9. Not trying to spoil anything, but the Dayman/Nightman musical episode will make your life complete. So that’s a plus.

10. Semi-depressing world issues will suddenly not seem so bad after they are the premise to an episode of Always Sunny.

11. You will get the enjoyment of understanding every Always Sunny meme on reddit.

12. You might think the jokes about Kaitlin Olsen (Dee) looking like a bird will get old, but they won’t.

14. You can re-watch any episode and have it still be great, which is why it’s always re-running midday on Comedy Central.

15. I shit you not, there is a secret message at the end of every episode that you can only hear when it’s played backwards. There is a new message with every new season.

16. The best jokes are the subtle ones that are only understood after watching the episodes in order. Otherwise, you won’t get the references to Dee and Dennis being on crack, Charlie being mildly illiterate, and Dee being pregnant for the better half of season 6.

17. For some reason, two part episodes are literally never on re-run back to back, so the only way to get the full experience is to watch it in order.

18. You will understand and properly use the term “brown out” in every day conversation.

19. In my opinion, it is the best thing since Starbucks’ breakfast sandwiches.