Who Are These People? Very Short Stories About the New Faces Around the American League Central 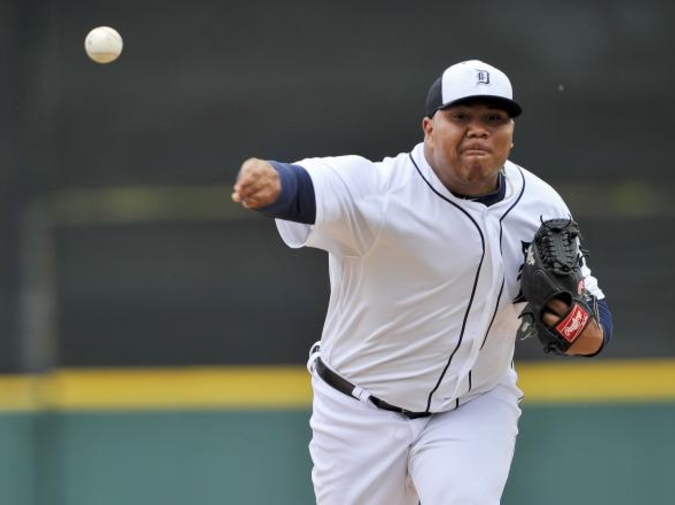 Jared, who was drafted by the Twins out of high school and turned them down to play baseball and football at LSU, was a backup wide receiver on the BCS National Championship team in 2008. He probably won’t make the White Sox out of spring training, but if he stays healthy, he’ll claim a starting job in a major league outfield just as many of his big-name college gridiron teammates are washing out of the NFL. Things are already looking hazy for former LSU stars Jacob Hester and Early Doucet, and Mitchell’s former QB Matt Flynn was a high-profile bust for Seattle last year. By the time Mitchell will be scheduled to receive his first lucrative free-agent contract, he’ll be at an age when most former college football stars are singing “Glory Days” in a bar.

Also, all MLB contracts are guaranteed, which means that if you sign for $40 million, you get every penny of that, no matter what happens to you. This is absolutely not true in the NFL. Keep all these things in mind if you’re trying to decide between baseball or football for yourself or kid

Yan is the first Brazilian player in the major leagues, and I bet no one else has “Ai Se Eu Te Pego” by Michel Teló as their walk-up music. As you may expect, he chose baseball over soccer, but he also chose baseball over completing his Psychology degree at the University of Tennessee. That choice may not have been as difficult. When asked if he wanted to be a shrink, Yan replied, “Absolutely not.”

He played for Brazil in the World Baseball Championship and perhaps his presence will help open the door for more Brazilian ballplayers. With three home runs in his first 14 games last year, he’s already inspired a few scouting trips to Sao Paolo.

Bruce has been playing baseball most of his life, and until age 17, he was a catcher. Apparently he wasn’t that good of a hitter or defender behind the plate, but had a hell of an arm when throwing out runners attempting to steal. When the Detroit Tigers signed him to a minor league contract, they converted him to pitcher. At age 19, he hit 100 mph on the radar gun for the first time. “I didn’t know before that I’d be able to throw that hard,” Rondon said. “I was as surprised as everyone else.”

Bruce is now 22, and coming into camp for the defending American League champions this year, he was penciled in for the role of closer. He has yet to play a single game in the major leagues, has only been pitching for five years, and now, one of the most important jobs on a team that played in the World Series last year could be his by this summer. “It takes time to learn how to pitch,” a Tigers executive said. “You can’t say he learned how to pitch in Little League and then high school. Really, his learning curve started as a professional. That’s pretty hard.”

Among the Moonlight Grahams of the world who had only one major league game, Francisley’s would have been the strangest. Coming in relief for the Atlanta Braves against the Chicago Cubs in his 2008 major league debut, Francisley gave up a long fly ball to Cubs slugger Alfonso Soriano, who celebrated the long single as if it was a home run. Francisley didn’t like this, and threw at Alfonso’s head the next time he was up. This earned Francisley an ejection from the game and a suspension from the commissioner.

Shortly after being ejected from his major league debut, he was sent to the minors, and never appeared in another game for the Braves. In the ensuing years, he’s played baseball anywhere they’d have him, appearing all across the minor leagues, Korea, and Mexico. Francisley ended up in the Royals system last year as a 30-year old and was doing well enough to get called up to the majors a few times, at last nullifying his status as a one-gamer. If he faces Soriano again this year, he has my blessing to actually hit him this time.

Going back to Kirby Puckett, the Twins have had a tradition of first round picks who are amazing defensive center fielders and mentor their successors at the position. Puckett helped Torii Hunter who helped Denard Span who was helping minor leaguer Aaron Hicks – and Span has been traded to the Washington Nationals this offseason. “It's been tough seeing a guy who's kind of like my mentor just leave before I get up there,” Aaron Hicks says. “It's kind of a shock, but it's just how it is.”

Like Bruce Rondon, Aaron has yet to play a game in the major leagues, but is expected to take an important job in the lineup this year. For now, it’s his job to lose, at least until the Twins’ 2012 first-round pick, center fielder Bryan Buxton, starts showing up in the same clubhouse buffet lines.

He lives in Los Angeles, where he also volunteers at 826LA, helps create products and materials for the Echo Park Time Travel Mart, co-produces the literary/culinary event “Hot Dish,” and works in TV, most recently as the Supervising Producer on the A&E series “Storage Wars: Texas.” He had a sparkling OPS of .393 his last year of playing baseball, in 1991.