What Bangkok Feels Like to a Recovering Sex Addict 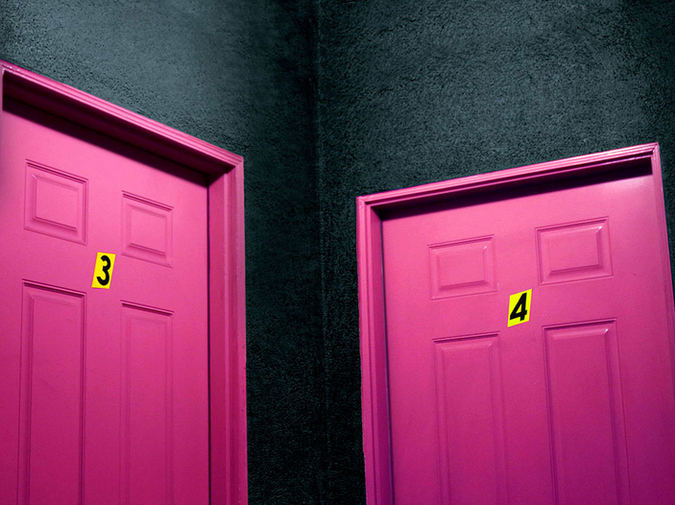 The girls can cost upwards of 10,000 baht (roughly $300) or sometimes cheaper, much cheaper. I imagine, even when they don’t call, even when they’re not wearing skirts, but jeans, not six-inch heels, but flip flops, that they must have a price too.

There is shame in thinking this thought. I shove it around in my brain, hoping it’ll seep out through my incessantly stimulated ears, flooded now with car horns and subway ads and undecipherable conversation, but nothing seeps out. Even more seeps in.

A man who looks to be in his sixties is talking to one of the girls. She can’t be older than nineteen or twenty. She squeezes his arm and, seconds later, they are swallowed up by the building behind them. I imagine her applying oil and making her way up his legs. Maybe he told his wife he was going for a nightcap. Maybe she pretended to believe him. The girl takes off her clothes and stands before him. She is his now. She’s shy and he sees that, so he smiles at her gently as a token of reassurance. He’s not a bad man. He won’t hurt her. He rubs the back of her head while she obediently takes him into her small mouth.

I see it all, in a dozen different ways, and I haven’t even reached the end of the block.

I’ve become judgmental of all the gray-haired white men in Bangkok, whether they are following girls into buildings or simply sitting across from them in restaurants. I eye them, doggedly, a cold glare resting on them and what I imagine their story to be, an obvious arrangement of sorts.

I cannot look at a man and a woman together in this city without picturing her body beneath his. A naïve girl hungry for semen and a new life, and a sick man hungry for domination. It doesn’t take long before I feel sick because it’s exactly the kind of thought that gets me wet. The imagined story, and the unjustified fury I feel over the story, quickens my pulse and piques my own hunger. Soon I am the man desiring the girl, desiring the power and possibility of it all.

Then I remember. I am not a man. I am a mere woman. And something’s wrong with me.

I walk by a “massage parlor” once, then twice, then three times. First I’m glancing over. Then I’m staring. I bump into somebody and have to say, “I’m sorry, excuse me,” but I don’t feel excused.

I feel ravenous, pitiful, and full of troubling and familiar justifications: I’ll just go have a look. This is their job; maybe they like their job. It’s not that much money. I’ll just do it once and get it out of my system.

But the girls don’t call out to me and I can’t help feeling like the balding narrator in Eliot’s Prufrock.

“I have heard the mermaids singing, each to each.
I do not think they will sing to me.”

A lover once told me, early on, before I could judge him for it, “It’s easy to get happy endings in Thailand. They'll notice your erection and all you have to do is lean into it.”

I envy that ease. That straightforward declaration of desire that only a penis can give. If ever I had the courage to walk into one of the seedier parlors, I imagine the clues I could give her. I could soak the massage table with my excitement, but she’ll probably just think it was spilt oil. I could moan, but she’ll probably just think my shoulder knots have found relief. I could tell her. Ask her. Beg her.

When I endure enough neglect from the massage parlors and my quota for rejection is met for the day, I return to my hotel room and make a nest of the pillows and duvet. I turn on the laptop and close it shut. I put it away in its bag and then retrieve it minutes later. I check my mail, browse the news sites, scroll through Twitter, watch YouTube bloopers, anything and everything but what I really want to watch: three-minute cell phone clips filmed by men not unlike the ones out on the street being serviced by the girls who never see me.

Unable to sleep, I head back out to streets on another maddening hunt. Mixed up in it all, I now notice something else. A woman on her knees praying to a dancing Ganesh. The image seems like a holy sin, a riddle, a dream. How can one pray here?

I stand there, fixated, before the unexpected occurs. Relief. Even if just for a moment, there is an opening, a full breath, a sensation of calm. On the walk back to the hotel, I buy slices of fruit from a vendor, letting the sweetness of mango invigorate my tongue. The fruit vendor’s baby is sitting on the pavement, feet black from dirt, fingers in mouth. She looks up at me and laughs the kind of laugh that is contagious. One that makes her belly jiggle with joy. I can’t help but laugh back.

This too is Bangkok.

Erica Garza is a writer from Los Angeles. Her essays have appeared in Salon, Narratively, Refinery29, Bustle, HelloGiggles and Mamamia. Her website is www.ericagarza.com.