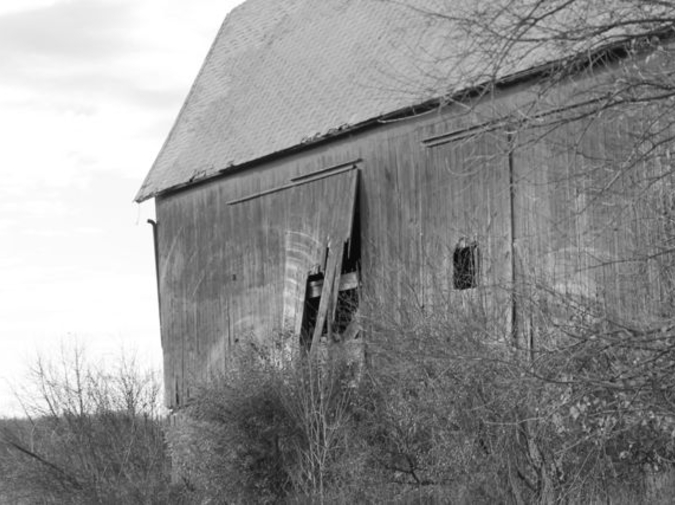 The first time my neighbor's place burned to the ground, I wasn't his neighbor, but he told me about it.  I'd brought over some Boston Brown Bread my wife is known for baking as a way of introduction.  He set it down on a stump in his front yard next to a watering can with a cracked stem.

"That's my youngest, Uriah," my neighbor pointed with his thumb over his back.  Uriah was sprawled out with his dog, covered by the shade of a chokecherry.  He was lanky with thick black hair like his father's.  "He's the one burned us out here about two years back.  That's why his arm's like that."  The boy's arm was smooth and pink; shiny in the way skin gets when it's been damaged but well healed.

"Well, it's over now.  He's like a moth to fire—fooling with mother's candles in the attic.  We just about lost him too.  I got hold of his heel and pulled him downstairs by his boots."  Uriah looked up and smiled at his father from across the yard as if he remembered the day fondly.  The dog got up and went around back.  "I don't guess he'll forget that lesson any too soon.  I know I can't."  He smiled then too, but it was the kind of smile that goes a long way in covering up a bad memory.

We shook hands and good-bye'd after talking awhile about the weather and the land.  His hands were as hard as I'd expected to find them.  I'm sure my hands were as soft as he'd expected.  (I'm retired and so are my hands.)  It didn't matter.  I liked him right off.  I think he liked me too; anyhow, we ended up being good neighbors.

"Thanks for the bread," he said from behind.

The first day it got warm enough to dry out the grass, we'd drink our beers together after the mowing was done, sitting out on lawn chairs next to the stump with the permanent watering can.  We'd watch the bugs rise off the cut and the birds swoop down to pick them off.  We both had plenty of field grass to keep down back then, and we'd help each other every so often.  He'd lend me an oil filter wrench if I'd broken mine.  I'd jump-start his pickup if his battery had gone low with the cold—all those reasons being a good neighbor is the easy way.

That summer I noticed Uriah spent hours out in the garden with his mother.  It was a bad year for potato beetles.  I asked her if he'd have an interest in helping us cull our own infestation.

I'd pay him a nickel per.

She spoke with thoughtful pauses like her husband.  "He's good help with 'em.  I know that much."  She chuckled and brushed dried grass from her work shirt.  "You'd have to stay with him though.  He gets himself off track easy.  You could pay 'em in Gobstoppers—money don't mean a thing to him."

Later that day Uriah showed up in his work duds.  I noticed his one arm covered in a thick layer of white sunscreen.  He followed me down the rows of potatoes and tomatoes in silence.  He was a good worker and knew just where to find them.  He out picked me two to one, but he wouldn't put the pinch on them before lowering them into the coffee can.  A few found their way back out but not too many.  I got the feeling he thought we were harvesting them for some higher purpose than death.  We fed him hot dogs and grapes for dinner and sent him home with a bag of Gobstoppers.  I don't think he said three words the entire time, but he smiled each time I praised him, and then went right back to work.

The second time my neighbor's house burned to the ground I let them takeover my shop while they rebuilt.  He insisted on paying me a rent for it, and so he did; said it was the insurance man's money anyhow, and they'd be paying out for it either way.

I did most of his mowing that year.  My wife curried his horses and helped weed their garden.  We helped as we could around the edges.  Most of the people around here did, and there was plenty to do.

Uriah came up missing most the hair on the right side of his head on that deal.  His hair was so thick and dark you could hardly tell it had burnt off until you got up close on him.  I couldn't look at him without thinking of the grief he'd caused—not until his hair grew in.  My neighbor never blamed him for it directly.  He complained about the insurance and the government, until you almost had to figure they'd been the ones fooling around with matches.

"Can't get no fire insurance this time 'round, none that I can afford anyhow, not with him still livin' with us."  The pain on that man's face is the reason a picture is worth so many words.  "I can't turn him out, all I see is a little boy when I look; won't give him to the state either.  I will not.  That's what they'all tell me to do, give him up to the state, give him up, but he's my son.  That's my boy."  He spat beside where he stood on his own patch of scorched earth, a gob of it soaked in by the dry ground like punctuation.

I didn't know what to say so I said nothing.

The summer after they finished rebuilding for the second time, I found Uriah out back of my shop playing with a lighter.  It didn't look to me like he was trying to start anything on fire specifically—more just fooling around.

"Hey!  No, goddamn-it.  No!"  I slapped the lighter away.  His eyes got afraid and confused.  I hauled him over to his father's place by the skinny of his smooth rippled arm—it felt cool and damp to the touch, as if I'd grabbed hold of a fistful of crabgrass first thing in the morning.  I don't think the circulation was ever restored properly.  I felt like hell for picking that arm to yard him by—even while I was doing it I felt awful—it wasn't his fault for being born to himself or his circumstance, but that didn't stop me either.  I never told my neighbor that Uriah couldn't come onto our place, but I never did see him set foot on anything that didn't belong to his family after that day.  I guess my neighbor figured a way of making him remember that much.

The first November in their new home, our wives decided to collaborate on Thanksgiving dinner and they'd gone off to harvest apples for pies and presses.  We'd stayed behind for whatever reason we'd both come up with for not picking apples that day.  My excuse was needing to study up on my new cider mill.  I'd planned to put up a big batch of cider and give it away for Christmas and New Years, but it was turning into a bigger project than I'd been looking for.  I glanced up from the owner's manual, out the front window, and saw a thick black plume rising off the attic of my neighbor's house.

A black waterfall running in reverse.

I was suddenly alive with an energy I didn't think possible at my age.  I flew down my driveway, hardly touching the gravel as I went.  I rounded the chokecherry, full speed ahead, and saw my neighbor coming fast at the pursuit angle.  We were both about equal distance from the porch.  He was closing hard.  I hoped he'd beat me to the door because I'd had nothing to do with entering burning buildings, and sadly enough, he'd gained some experience in that department.  But he grabbed me around the shoulders, our legs tangled together, and we went down in a heap.  My head bounced off the leaf covered grass so that stars swirled into view.  They reminded me of the football games and fistfights of my youth.

He lay heavy as a bag of gravel against me—pinning me to the damp ground.

"Don't!" he said.  "Let it go!"  The fire roared so loud he had to yell.  I could feel the breath coming off his shouts.

The heat rising off that fire is the hottest I ever hope to feel.

He stood up off me, looked into the smoke and fire, and then to the ground, his hair whipped by an updraft.  "Let it go," he hollered.  He raised his hand to his shoulders and dropped them.  "Let it go."

We both stood still but for our heavy breathing, watching those last few moments slip by us as if they'd already gone...and maybe they had.  I've asked myself a thousand times over and at hours far later than this one.  Had they gone, or had they been there just as they'd seemed to be?  I awaken some nights covered in the same cool dampness I felt after taking ahold of his skinny arm.  If I want my rest, I let myself believe those moments had past.  If I want something else, well then—I don't.

Gabe Herron lives outside a small town near Portland, Oregon with his wife and son.  His poetry has appeared in The Green Hills Literary Lantern, and he has a story forthcoming in The MacGuffin.  He has worked at Powell’s Books for eleven years.