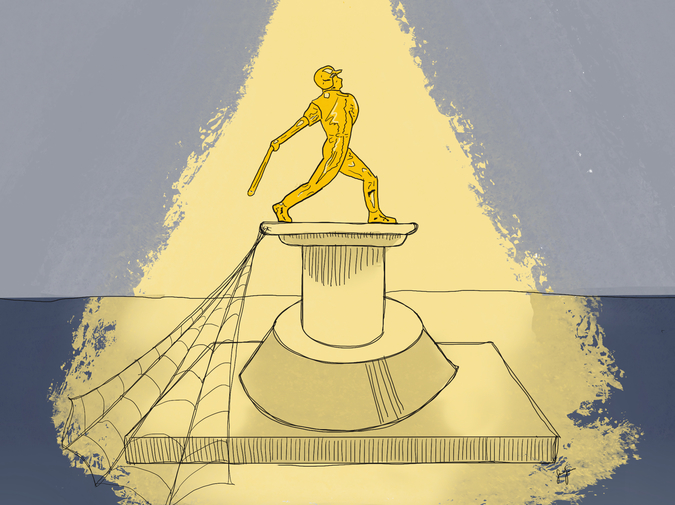 Rome was good. Sat ninety in the summers. Leaned on his off speed when the weather got cold. Postseason, most of the district had seen him by then, we took advantage of teams whose scouts said he was two pitch: fastball/change. Got him to bust out the slider he’d been tossing since wiffle ball—even though Mr. Roman made him stop. “Early age junk can fuck up an elbow for life.”

I taught Rome a two seamer when he was Tommy John’d junior year—saw him practicing the grip with oranges from the cafeteria, stress balls Mrs. Lewis used to pass out from the counseling office.

For us, gamedays meant an eleven a.m. bus, meant missing fourth, fifth, sixth period. When Rome was starting, we didn’t even show. Mr. R let us take his Jeep, and we would run the 405 out to Simi, Chatsworth, Westlake—JV kids thought this was bullshit—“he gets to take his own car?”—but Skip wanted his pitcher and catcher on the same page, extra hours in the whip more time for me to plan the game script, go over with Rome what he wanted to throw 2-0, 1-1, 0-2.

Regular season, almost undefeated in league—Rome shoved. Number one seed in sectionals, Rome slotted to take the ball for the clincher.

Hour before the game, still got both my knees ice packed, Rome tells me Skip’s trying to let Bigs get the start ahead of me. I fucked up my MCL earlier in the season, some Campbell kid thinking he was Pete Rose trying to take me out at home—and this sophomore, Bigs, got some starts, hiked his average against lefties higher than mine had ever been. The kid going for Chatty was a southpaw, Skip wanted to play the numbers, but Rome told him to fuck off, I was his guy, he wouldn’t go unless I was calling the game behind the dish.

We looked good through four. Rome sat them down 1-2-3, couple K’s, backwards mostly.

The scouts were in the crowd. At that point, Skip wasn’t shy about it. Rome said he told him about it pregame, let him know which D1’s had come down, which D2’s might give him a better chance to shine, maybe play both ways.

In the bottom half, Rome had a No Hitter. End of the pine to himself, nobody had said a word to him since pregame. The Unwritten Rule. Don’t jinx a man when he’s on a roll. Rome was leaned on his knees, pitching arm slung through half a jacket, spitting dip. I knew the rule, we’d been there before, Rome regularly carried No Hit bids into the later innings, but he’d never seen one through, always some bullshit breaking it up in the fifth, sixth, seventh.

The heart of the order was coming up for Chatty—three kids I heard were all going Cali D1’s (Fresno, Chico, UCLA)—and they’d already seen Rome once, all fastballs for the three of them. Rome could get away with that shit in regular season games, blowing by dudes who’d never faced him before, but this was playoffs.

“I think we should switch it up—” I said, dropping my ass on the pine right next to Rome. “Heart of the order next.”

He didn’t say anything. I was breaking the rule, tempting fate, but this was different, I was his catcher. I needed to call the game.

“Let’s go backwards this round,” I said. “Start them offspeed, only go with the hard stuff if you need it.”

Rome gave a nod, hat brim dipping and bobbing back. That was it. Our nine hole guy struck out on the next pitch and I led the charge out to the diamond, waiting for Rome to take the mound.

No signs needed. We knew what we were doing. Rome rocked into his windup soon as the Chatty kid stepped in the box.

You can tell by the spin of a ball what pitch is coming—eye on the shape of the seams. Circle means off speed, straight lines mean the hard stuff. Rome’s ball didn’t move at all. Like a knuckler, no spin, I could see every stitch in the pitch coming the kid’s way. Hanging there. On a plate. Cookies.

Dead center, four-hundred. Kid took his time around the bases. Buddies going crazy in their dugout, parents wild in the stands, he sopped it up, raised a hand like he was fucking McGuire after 63, big fist pump, double tapped his heart and pointed to the heavens when he hit home.

I called time. Rome was pacing the mound’s dirt rim—where it gave way to grass. Before I’d made it out of the batter’s box, he snapped up, shot his glove out like he was catching a comebacker, and said loud enough for everyone in the stadium to hear: “get back behind the plate.”

I did. Turned on my cleats, fell into my crouch.

Skip came out after two more fastballs led to two doubles, another run. 2-0 in the middle of an elimination game. Cole the Lefty took the ball and Rome walked, head hung, back to the dugout without glancing my way once.

I was pulled an inning later—"Bigs catches Cole better, kid”—and I watched the rest of the game from the opposite end of the bench. We lost. Blowout. Rome didn’t say shit to me. Not when their sixth inning rally extended an hour. Not when the game ended and we were expected to pile out on the foul line, shake hands by the batter’s box. When I came back to pack my gear, he was gone. Mr. R wasn’t in the stands and the Jeep wasn’t in the lot. I took the bus home.

A week later, I hadn’t talked to Rome. We were supposed to meet as a team, one more time, return our jerseys to the athletic department and give out awards. Rome didn’t show. He won MVP, obviously, no other choice, and when Skip read it out to the team, he asked me to accept the award since Rome wasn’t there. “Only right that his catcher finally gets some credit.”

It felt weird to text Rome. Yo I have your trophy. So I turned it into the main office, asked Mrs. Lewis to put it in the glass case in the gym or something.

We didn’t talk for the rest of the year. Baseball season in spring, school basically over by the time we were eliminated anyway, showing up wasn’t really important anymore, especially for us. I saw him at graduation though. When Rome got up there, no explosion from some section of folding chairs spread out on the football field. I didn’t see Mr. Roman at all. The principal said some shit about a local community college and mentioned that Rome would be continuing, “his dream of pursuing a professional baseball career.”

Rome walked off the stage and that was the last I really saw him. I quit ball, majored in business, got a job cross country. I heard Rome ended up quitting too, his sophomore year, moved home, went to work for Mr. R’s electric company. Never played again.

Since then, folks have talked to me about him a lot.

“One bad pitch and he’s done? Shame. Could’ve been great.”

“If that start ended the whole thing for him, he probably didn’t have the stomach for it in the long run.”

Most of my comebacks to shit like that are the same. Some variation of the same take, the one I’ve had for decades and will probably be reciting till I’m dead. Rome? Nah, man. Rome was good.

Joe Bohlinger is a fiction writer from Los Angeles. He received his MFA in fiction from Oregon State University where he currently teaches writing. He lives in New Orleans.