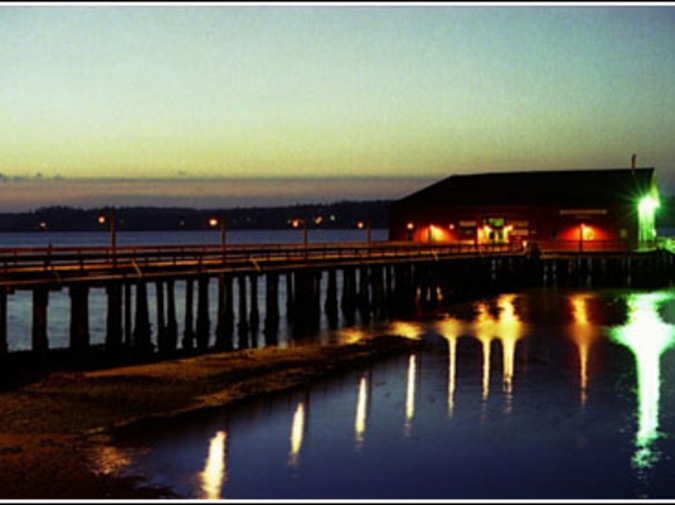 Kitty peeled dead flies off the screen. She squinted in the direction of the boatyard. "No boats today," she muttered to herself.

A late season heat wave had brought a constant haze that made it hard to see out over the bay.

A few feet behind her, Jimmy lay on the skinny bed, hands behind his head, eyes transfixed on the tiny television. He was watching a program about botflies on PBS. The sound was turned down low, but he could still hear it, could still see the victims, their arms red and inflamed from infection, the after-effect of larva gestating and hatching under the skin.

Kitty turned from the door and sat at the small round motel table. She picked up a book of matches and began lighting them, one after the other, burning each down to her fingers before letting them drop.

On the first floor below, excited kids raced along the boardwalk, anxious to beat their parents to the beach.

Kitty tried to appear preoccupied by the little fires in her hand, until all the matches were burned out.

"I spoke with my folks the other day. I don't know what you expect me to tell them. I mean, whatdo you want me to tell them? What is it again you say you do for a living?"

Kitty examined her fingernails, crossed and then uncrossed her legs. She bit off a piece of dead skin from her fingertips.

"Oh, that's right, you're a writer. Y'know, Jimmy, I am pretty sure to be a writer you actually have to write once in a while. I mean, I know you don't think I'm very smart, but I do know that."

"At first, the painful bite is indistinguishable from a common bee sting or horsefly bite."

"The egg deposited, the botfly uses pointed mouth hooks to bore deep down through the skin."

Ever since he was a kid, Jimmy had been terrified of parasites. He found the very small in this life much more unsettling than the very big.

When Jimmy left college to try to make it on his own as a writer, he found that money runs out fast. And because he wouldn't work (citing the severe time constraint a day job would place upon his art) eventually he was forced to find shelter down at the bowery. There, he met a guy with scabies. It wasn't the empty stomach; it wasn't the squalor alone. It wasn't the slew of rejection letters that made him quit that first time. It was the scabies that made him move back home.

"Hey, Jimmy, didn't Hemingway have a drinking problem? I mean, I know I didn't go to college or nothin', but I know Hemingway drank a lot."

"Doing heavy damage to muscle tissue, the larva feeds off its immobilized host."

"And who's that other guy you like so much? What's his name, the faggot? the one that wrote that movie? I know he had a drinking problem."

The far off sound of trucks making a final downshift before speeding up to get on the freeway mingled with salt-flavored air and blew up from the beach; it came through the screen door, the heartbreaking sound of diesel engines and seagulls.

Kitty scratched her head, tugged at her dirty sun-bleached hair and stood up. She straightened the towel she had wrapped around her waist and, peering over her shoulder, lifted up the back of it, swatting off any dust that might be on her backside.

"I'm going down the beach," she said, no longer sounding annoyed. She snatched her little square purse off the television, knocking the oversized motel key to the floor.

At the sink in the back of the room, Kitty grabbed a wicker bag from the open closet. The lights bright and unflattering, she didn't bother with the mirror. She threw some belongings into her bag and walked out the door.

Jimmy didn't look up, not even when the screen door slammed or when he heard the squeal of brakes. He didn't look up when an ice cream truck passed by or when a girl shouted something in the distance about a "no-talent impotent fuck," as she walked along the boardwalk, on her way to the beach.

Jimmy was mesmerized by the botflies. He wondered how such a tiny bug could bring about so much devastation.

Joe Clifford is a second-year student in the M.F.A. program at Florida International University. His work has appeared in the Connecticut Review, Dos Passos Review, Opium, Big Bridge, Bathhouse, and Bryant Literary Review, among others. He presently serves as editor-in-chief of Gulf Stream magazine.