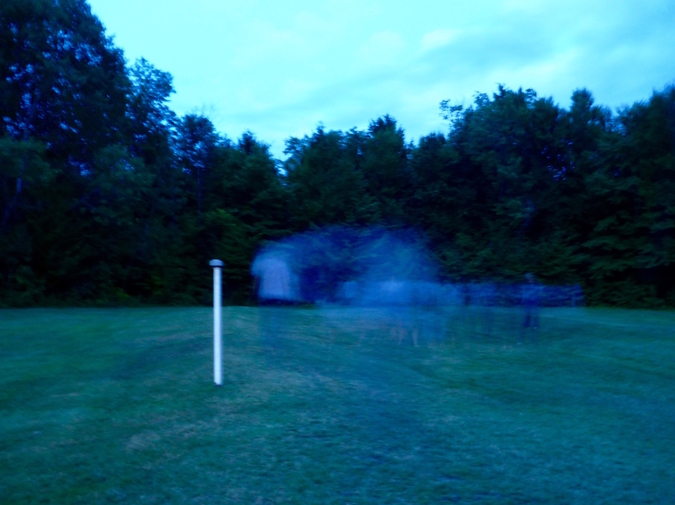 The bank took the car but they didn't take my legs, so this morning I stole the neighbor kid's bike and pedaled into town. Saw you there, coming out of the florist's with an armful of yellow flowers. Looked like an apology.

“Are those for me?” I shouted.

You turned, but from the front the resemblance wasn't so strong. A face has more and finer details than a back, and it's not so easy for liquor and wishful thinking to smudge them around into something familiar. She was pretty, though. About like you. On that same level, I guess. I smiled at her, and I confess, in the name of honesty and open communication, that I wished just then that the neighbor kid were a little bit taller, or at least a boy. I believe on a boy's bicycle I might have had a shot.

But right now, I'll tell you something: I'm glad that she's a girl. I'm glad that the woman with the flowers was more frightened than charmed by me. If, instead of hurrying to her car, she'd taken me up on the offer implicit in my grin, I might not have written this note to you until tomorrow, and another day without you is a day too many.

I apologize for the coasters. I had no paper on me, but I hear the post office will send anything with enough stamps on it. I hope that's right, and that the rubber band held. About the stains: they're mainly coffee. I'm doing better.

The Scent of This Woman

Standing in front of the bathroom mirror, combed and coiffed and clothed in a fresh, green dress―the green of tulip stems, perfect for spring―she sprays a spritz of perfume on either wrist, rubs them together, and sniffs experimentally.

She sprays a fine cloud of scent into the air before her and steps into it, then pauses, head cocked, considering.

She pads on bare feet to the bathroom window, heaves up the lower sash and sees her husband, down on one knee across the yard, putting gas into the lawn mower.

Still pouring fuel, he puts his nose up in the air and tries.

She retreats into the bathroom and gives herself another spritz before returning to the window.

“What about now?” she yells.

She frowns and spritzes once more, pressing down hard on the atomizer and holding it for several seconds, trying by force and persistence to wring something extra out of the cool, cut glass bottle getting warm in her hand.

“What about now?” she yells.

Having filled the mower and re-capped the cap, her husband wipes his gas-slick hands on a rag and sniffs a third time.

“I think the wind's blowing the wrong way.”

The furrow in her brow deepens. She spritzes one...two...twelve more times.

Her husband blows his nose on the rag, closes his eyes, tips back his head, and with one hand wafts the air from the general direction of the bathroom window towards his upturned nose and its eager, flared, sucking nostrils. His eyes spring open.

“Is that gardenia?” he yells.

She smiles and shuts the window and goes to her favorite coffee shop, where she sits at a table twelve feet from mine.

Matt Naylor is from Kentucky but lives in North Carolina now. He sells donuts there.