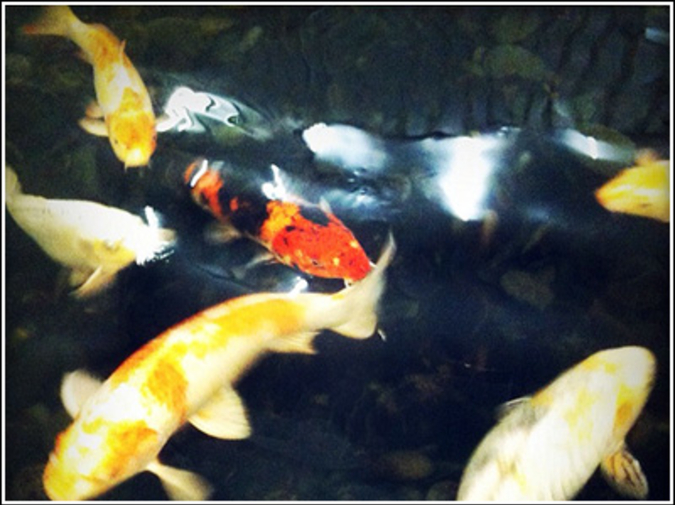 This friend of mine, Greg, he's always quitting smoking. He breaks his cigarettes in half, or runs them under the tap, or both, so he can't light up. He hides all his matches. And I'll drop by, and he'll be laying on the floor, reading Zen poets, or stories, or some essays or something by someone. One time he had a Volvo repair manual in one hand and a Swedish/English dictionary in the other. Anyway, he's always reading. So I'll move a pile of books to clear some room on the couch, and Greg, he'll try and offer me something even when all he has is water. He'll be mumbling some story while he's knocking around in the kitchen that I can't hear much anyway since the water's running and he's got this scratchy voice. But what the hell, the parts I can hear are enough. So I get up and move to the kitchen, and he's talking about the baths aboard Korean fishing boats — this is just one example — while he's heating up the oven and digging around for Scotch tape, telling me that he was on those boats for four years, working for U.S. Fish and Wildlife, indexing whatever came up in the nets, tracking fish counts, and keeping an eye out for new species. He said it was his boat that dragged up that rotten plesiosaur you heard about, that it was his field report they changed and called it just a half-eaten whale. But he said the weirdest stuff he saw was in the baths: Most of the men, even the old ones, had their dicks studded with pearls — no kidding — in these spirals and other kinds of patterns up under the skin. And I'm like, What the...? and Greg goes, "More pleasure for the woman, Jimbo," like he thought it was funny that I even had to ask. And you've got to picture him in the kitchen the whole time he's talking, lining up Camel Lights on a cookie sheet and drying them out in the oven. Then he tapes together a cigarette and uses the gas range to light it and stops talking to smoke, and I wonder if anything he ever tells me is true. Not that it matters either way. Greg's a storyteller, you know? A real pro. Fact, fiction, or flat out lying, it's all the same difference to me.

Aside from the politics, Spokane is all right. If I ever miss the ocean, I can drive there. But I don't really miss it, or at least not often. Priest Lake is only a two-hour drive, and our cabin and ski boat are fine. I built the boat dock myself. I don't think my dad was ever prouder. What I'm saying is it's nice. It's a helluva lot better than a lot of cabins. You should've seen this one I had up in Kodiak when I was working for Fish and Game. First job out of college: salary plus housing. Housing turned out to be this worn out A-frame not much bigger than a teepee. No foundation under it — you can't do that on permafrost — so they had it propped up on concrete blocks, and any clothes I wasn't wearing I'd spread on the floor, try to keep the wind from coming through the cracks. Had a stove like a broken-necked dragon. And an outhouse, of course — winters are too cold for plumbing. So compared to that, spending summers on the ships was good. That, and that's where all the action is.... Once — and this is a true story — we even picked up a grizzly. I'm serious. It was swimming out there in the Sound about a half a mile from shore. I don't know why. Not everything's got an explanation. Anyway, it took four of us reaching out with gaff hooks, but we got him, and he was too exhausted to be pissed. Plus, you know, the silvers were running, so we had tons aboard to feed him. Still, no one wants a grizzly on their boat, not for long. Now, Valdez was close, but they weren't going to give up a full day's fishing, so that meant coaxing him into my Zodiac and having me pilot him ashore.... Sitting in a raft with a grizzly, that's something. Even with one who's got a reason to like you.... I think about that bear sometimes, wonder what he's up to.... My friend, Jim, he kind of reminds me of him; that's probably part of it: Jim doesn't know what he's searching for either.... Falling in love again and having a son, that's what I think would help him. My own turned five in May, and I know he helps me.

Rob Carney is the author of two books of poems: Weather Report (Somondoco Press, 2006) and Boasts, Toasts, and Ghosts (Pinyon Press, 2003). His work has appeared in Mid-American Review, Quarterly West, and many other journals, as well as Flash Fiction Forward (W.W. Norton, 2006). He lives in Salt Lake City.