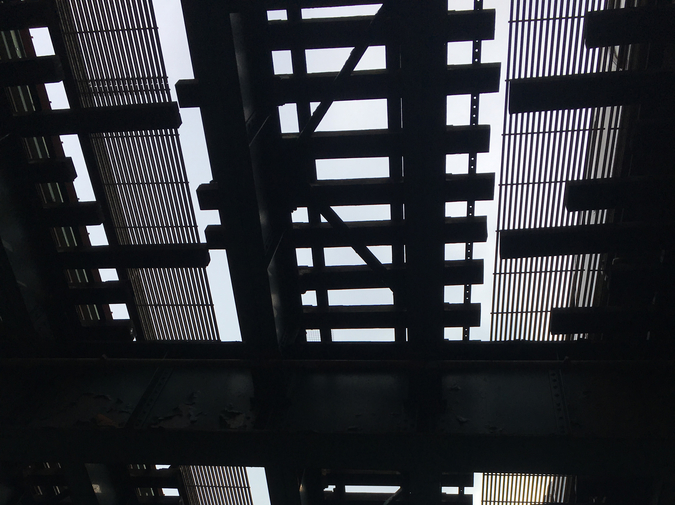 Don’t you think the front of the Moon and River Café in Schenectady
grins out at the cracked streets because life’s just that damn funny
and the evening breeze smells like the rust kicked up by passing trains?
Knock knock, who’s there, my feet hurt. Did you see the deodorant
and dental floss lined up next to the gluten-free muffins? How much
for a ham sandwich? “We get a lot of train people in here,” the owner
told us. We’re train people now. Can you ever forgive me for my pinky-
hitching falseness? Look, the hippies have come rolling in to play Beatles
songs with their rattling guitars and drink night coffee, their voices are full
of tambourines. Do you remember how the houses near the river are stacked
on top of their bricks like cats stuck on fence posts? And what about that
river chuckling past, all debris and fishlessness – what a gas. Knock knock,
who’s there, coffee, coffee who? Pinned to the walls are articles and ads, signs
and sayings, probably somewhere here there’s a good joke. We were kids once.
Isn’t that hilarious? Now we’re train people and we try not to skip too much
through the dark to the hotel. A block away, a woman is yelling at a man
full-throated in the street. They’re probably dating. They’ll probably go home
and laugh until they curl in on themselves like pillbugs. You’re the closest
I’ll ever come to having a sister so maybe you’ll get this one: Knock knock,
who’s there, I don’t know, I don’t know who? Yes, yes. That exactly.

From the window I can see the clouds crumbled
like birthday cake across the earth and it’s funny
but at this altitude I can finally breathe again.
How long has it been?

I’m too polite to tell you your apartment
reeks of pot, despair, but you know how
my stomach has ached for weeks now, no matter
how tenderly you fed me slices of champagne mangoes

and peeled the nubby skins off lychee only
to pass the chilled flesh into my sticky fingers.
It seems like they should have tasted better
than I remember. When my plane took off

the air over Philly was orange with smog and cloud
strapped over with grey and we rose up like a whale
through the snagged beams of sunlight toward
some atmospheric surface, everything smooth and surging

until the breach, and the leveling, and the stillness.
I’d never tell you but lately I’ve been thinking of drowning,
of diving into the cool press of water, the sunlight
sparkling overhead but all around only pouring

subdued past me to fade, all the sounds welling up
through my body like whale song – no more sharp edges,
just a taste of leaves and sleep. Now that I’m near my destination
and the clouds have swollen to canyons around the plane’s descent,

and lightning flashes its teeth too quick to be seen,
I’m a little scared. See, I couldn’t fix the words to tell you—
quick fishes, gone in a blink – but I left me behind
to go away with you, friend, I left me on the ground

in Indiana of all places and now I’m coming back to me
and it seems my path in life will be always like a whale’s,
that I will submerge so deep so long, you’ll think I’m gone
and that’s when I’ll surface, blow hard, inhale.

Virginia Thomas is a painter and writer based in Bloomington, where she recently received her MFA from Indiana University. Excerpts from her book-length poem Lucy the Teenaged Werewolf are available in PANK 8.