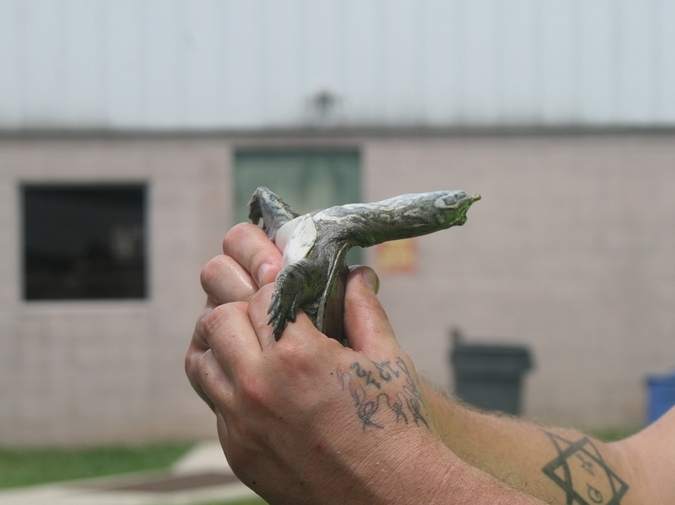 Friday, late August. Again the hung-over starry-eyed
world tries to end but tonight I dance
drunk, hips
geared to a boy whose knifing shoulders nearly grace
my own.   He speaks the names
of ex-girlfriends like I do not love him.
Beach party before all beaches are gone forever.
A salty bonfire, everyone with glow
sticks cuffing wrists, necks,
seaweed ankles and no one cares. Frayed
tank top Justin. Already the constellations
unhinge, buzz of night gnats, a sloppy
beer kiss. Maybe
I have a hard time believing in boys
who don’t like men that way and still uncouple
from each girlfriend, a common method.  Justin
begging for orders, to be let loose
from his clothes. He kisses me and it isn’t harmless
but he doesn’t care.    Like I wouldn’t split
him open, crawl around inside, fuck him up.      Justin
with the car crash mouth.
My meteor shivering on the porch
to be let in from rain. The barrel eats
the bullet and it isn’t love it’s gravity and gravity is just
obedience plus
motion. Tonight
I dance, and nothing makes me feel as inevitable as my drunk
thigh and a drunk boy’s sweaty palms.  I am
happy as an asteroid
sailing headlong to the sun, but the earth
does not give me my wants. Instead a man
sprays a can of beer all over us, his fucking faggot shrieks
become spotlights.  Justin and I caught touching
each other in the jail yard, warm faces. He
laughs. Before I can hate him, gravity
happens. Justin punches, hurls him to the ground.
and the planet beneath me rocks further
off its purple axis. The glow sticks
snap from their necks into straight lines. Incompatible
galaxies. Justin’s forearm bulging blue across
the man’s throat. The bonfire
crackles but it isn’t the burning of driftwood
I hear.    Justin breaks the man’s ribs
bar by bar. Once from my car I saw two men
rob a gas station at gunpoint. I was hard the whole
time.   Watching Justin’s bloody
knuckles I try to hide my erection. Over and over,
Do I look like a fucking faggot to you? I want to wedge
a yes somewhere he will find it—mountain
of flannels and boxers, a matchbox, his browser history,
little grey phone text bubble       really need cock. you free
dude?—he doesn’t need it.   He kissed me.
Everyone saw. Someone calls the cops so we run,
get in the car, get on the highway home. He turns
my passenger seat into a wound. I wonder how
he does that. My unbuttoned
beer-soaked shirt. I know he
did not beat up that man for me but tonight I have nothing
to lose. Beaches remind me of icecaps
melting. My stupid matchstick tongue, bone
marrow gasoline. I want a boy
to blow the walls off
prisons with me, to hear that glacial crackle of him call
me baby just once
so I can salivate over two syllables droning
somewhere in me until I die. He asks why I stop the car
and I tell him I love him with my farewell voice.
Tonight I tell a boy that I love him and he gives me
a black eye and a broken
nose. The boy who runs to the end of my headlights,
the boy I follow who punches me again and again
and kicks the world’s crumbling
spine until I pass out and unfold
across the double yellow
line like a crucifix. I wait for the cops to bisect my body
with their fuck-you-faggot cars. No one kills
me but when I stand Justin is gone
and by some unfortunate miracle
more than a name is needed to call down an apocalypse.
I did not come here to fight. For once I just want a boy
who doesn’t make me feel like a shoplifter.
Justin and I
playing video games in our boxers.     Justin stealing
my clothes.   I wish he killed that man
because then it couldn’t end this way. We’d dye our hair
in a gas station bathroom, change our names, live
peeking through motel room blinds, fear
every man in a suit is a government
agent. Justin holding the bank
teller at gunpoint. Justin shooting me before
he shoots himself.   But that’s different a movie,
another roving end to someone else’s existence.
I never see Justin again. Tonight I drive
home from the beach, idle waves and sirens somewhere.
No more and-then-what-happened. The stars
all in their pockets,
the world where we left it.

Can you get to that?

That boy who came to my house, sang me “Personal Jesus”
and some indistinguishable but ultimately decent Dead tune
with his dad’s acoustic when we were in eighth grade,

before we smoked in my basement,
listening to Maggot Brain, making out—that boy
barefooted rip-jeaned into the forest

behind the parkway last February, his father’s .38 in his belt,
spilled his mouth like a spigot
across the roots of a birch tree.

When is it that a mother stops opening the same bedside drawer
sifting through the wastepaper bin searching for a note
even though no one’s touched it for months?

I stood behind his mother in the checkout lane at the supermarket
in the first week of the year. She assembled her canned soups, her bruised apples
and half-ripe bananas, peppercorns, tabloids, ready-to-eat roast chicken while I

waited in that place of recognizing a grief that doesn’t know
what you are. She paid, I paid and we didn’t speak a word to each other
even though we parked two spots away. When I got home, I found my neighbor’s cat

had mauled a pigeon and I brought the bird to the vet all bloody.
Imagine the surprise in finding you can’t fly away from two knotty hands
wrapping you up in a pillowcase, holding you in a lap in a car.

The vet said that the humane thing to do would have been to let it die, to continue
doing whatever it was that I was doing. He said that he’d try to save
it but he’d charge me if he returned the bird to me. I told him it wasn’t my bird,

so he could just release it. Called later to ask if the little guy made it out okay.
I’m the guy who brought that pigeon in last week. Just wanted
to know how he’s doing? I fell into her silence. Sir, do you think

that you’re the only bleeding heart in this town who brings us half-dead birds?
I still don’t know if it’s worse to sit in your own pause or someone else’s.
The phone was on speaker while I ate dinner over the sink.

We don’t keep records on these things. Let me ask. A minute passed.
Your bird is fine.
Did you release it?

Your bird is fine. I stared at sparrows on the telephone wire. Did he fly out on his own?
When did it become my job to make you feel better about yourself?
I stuffed the paper plate in the garbage. Thanks.

Take care. If there’s anything else I can do, please let me know.
I think of his parents, how they built something that survived
21 years. His face was pimpled, and I remember his blonde

hair greasy across my shoulder. Walking in the woods last week
listening to “Dark Star,” I find the tree where they found
him, the only birch tree in the forest, bloodless

snow around the roots. My joints ache, and I peel the bark
off the trunk and for the rest of the week I feel cursed
because not only will the bark not grow back, but

from the highway I hear a tire blow out,
a cluster of birds fly away
and it fills my head like a year old bullet.

Matt Massaia is a New York-based writer and musician. Occasionally, he tweets at @MattMassaia.