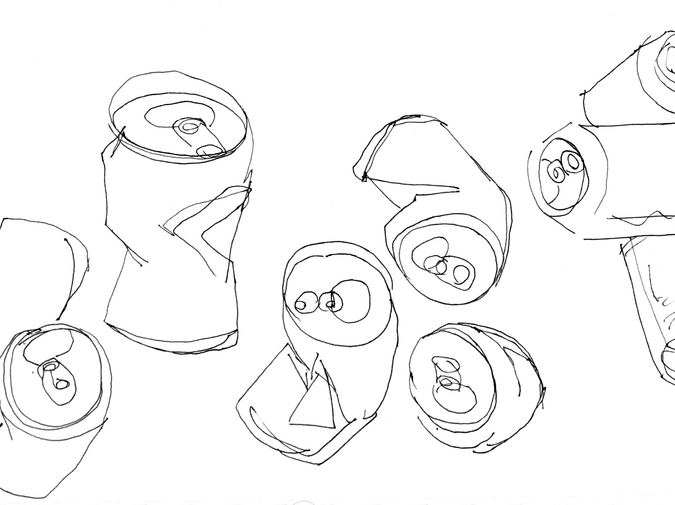 We go to a bar for lunch that serves free candy.

Middle of the day and I just got off night shift and she didn’t go to bed either. She went out dancing with her girlfriend. I unpeel her a Reese’s buttercup, she opens an Almond Joy, bites in, spits it out in her hand.

“What are the ones without the almonds?”

She laughs, looks at the wrapper.

“Guess the word Almond should have tipped me off. Fuck almonds.”

I point at the juke box and say, “Last time I was in here there were these Portuguese exchange students and they kept giving me quarters and had me picking all the songs for them, so know what I did?”

She says, “You played all the long long songs and kept their quarters when they get tired of listening to … this is the end my only friend, this is the end … and finally they left, thinking America sucks and America is depressing …”

“You tell me that story every time we’re drunk here.”

“All coming back to me now.”

There are board games in the corner too, but all the pieces are missing, so if you go to play Clue, the weapons are lost and half of Mrs. Peacock has been torn off, the rest of her is sticky.

The bartender suddenly does something to the TV and there is noise now.

And there is flashing.

Horses on the TV.

“Oh look at this! The Belmont Stakes.”

“So, we actually have money on this race—guy at work put it in. Twenty bucks.”

The race starts and everybody stops eating candy and stops losing pieces to Jenga and to Monopoly and they stare at the TV, and they cheer as the horses launch out of their gates

I take my phone out and look at what the odds are paying out from the post.

We bet something called a superfecta and I don’t understand superfecta.

But then I see the payout.

I open an Almond Joy.

She tears open a Clark bar.

We bite into our candy.

“How did you know the kids were from Portugal?”

“They all had on shirts that said Portugal on them.”

“Dead giveaway.” She sips her beer, “Would you wear a shirt that said America on it if you were in Portugal?”

“Send me to Portugal, I’ll wear whatever.”

The channel is flipped back to the TV movie. Everyone is quiet now and doesn’t care.

There is smoke now in the TV movie.

Pink smoke and someone singing a love song in a cemetery, I think. I can barely see through the fake smoke.

It gets cooler though, when the lion leaps into the frame, and bites down on the innocuous gravedigger.

I’m embarrassed of the T-shirt I have on. It’s the crappiest T-shirt I own. Black pocket tee, too short, belly almost out. Holes from what might be moths haunting our closets, but probably are just from things I don’t remember going wrong, out in the ordinary open.

We’ve left the bar for some reason. Deciding to go explore the grid for other places that can do exactly the same thing to us, only slightly different. Launch a rocket launcher in any direction in this city and hit a bar. Nah, don’t do that. Just flip a coin and walk.

Out on the stimulus overload street, the sun dips behind a falling-over building. In the shadow my wife takes my hand. Her wedding ring is loose. Mine is tight.

And I remember when she used to smoke American Spirit cigarettes and  I used to run every night across the bridge  listening to my headphones. Sometimes it’s too hard to search your own life, so you just shuffle automatic generated digital playlists for who you should become.

We were assholes then. I like us better now

At the intersection, there is a beautiful couple.

She is in a green dress, tall, blonde, leaning on him. And he is taller by 1/4 of an inch and has a life that is probably incased in bulletproof glass but you wouldn’t know unless you tried to shoot him here on the street, and neither me or my wife have a gun.

They are walking two beautiful dogs, too.

I hate them all individually and also as a unit. I just had candy bar lunch at a dive bar and they look like they’re on the way to eat oysters and—wait, the light has changed and they are crossing but the beautiful green dress girl looks suddenly wobbly.

And ah shit—there she goes, down in the middle of the intersection. Crashed hard. Arms splayed out.

And she’s lying on her back, fancy shoes pointed up like perfect tombstones.

Blonde hair covers her face in a total veil.

Her legs begin to bleed.

My wife is a drunk superhero, grabs the girl’s purse from the mouth of the storm drain and then stands there holding the purse with both hands.

The man in the black polo is crouching down and saying “Honey honey honey, get up …”

The dogs from the gourmet dog food commercial think it’s play time, and are licking and wagging even harder. But the girl’s eyes are flickering and then I see the man in the polo wobble and slip down to his knee as his face droops.

He’s fucked up too!

Can you believe it? Day drunk as we are, right now my wife and I are the most sober people on 83rd street.

My wife sets the purse down, back on the middle of the street. I pull the girl to her feet. The guy braces himself on a dog and rises to his shaky feet. Everything is fine.

I take my wife’s hand and we walk two blocks up and sit on a park bench.

A few minutes later the beautiful-fucked-up couple come stumbling up the sidewalk.

“Do people still do morphine?”

The girl“s legs are bleeding worse now. The blood so thin. Coming down fast.

“Ah shit, those are nice shoes.

She hikes her green dress up around her waist.

She’s got no underwear on.

Black polo man sees her like that, he doesn’t care. The dogs don’t care. Me and my wife kinda care. We don’t get to see very many rich naked asses or genitals in real life, just on the internet.

When she passes us, we take a long look at her bare ass and form mental snapshots so we can describe it vividly for our friends later, whenever they materialize out from under the work week.

As they turn the corner and walk away up 83rd street I notice here are drops of blood right there on the sidewalk in front of us.

I think about my life. Because that“s what you should always do when you are confronted with small pools of blood.

The droplets look like cherry ice slush stain from the ice cream man parked up the block. I can hear his traditional song, just like always. Living in this city is like living inside a music box that gets drowned out by everything else.

All the people coming up the block now, look normal. Are squashed flat with worry about electric bills, and sick kids and educations and who knows what else and they’ve never had an oyster in their life.

No big deal, they walk through the blood not even noticing.

People miss what they miss.

And they do it on loop their whole lives.

Just once, my wife and I are noticing.

Rae Buleri is the illustrator of Dust Bunny City (Disorder Press). She is a textile artist, and lives in Jersey City, NJ. Instagram @raewatch