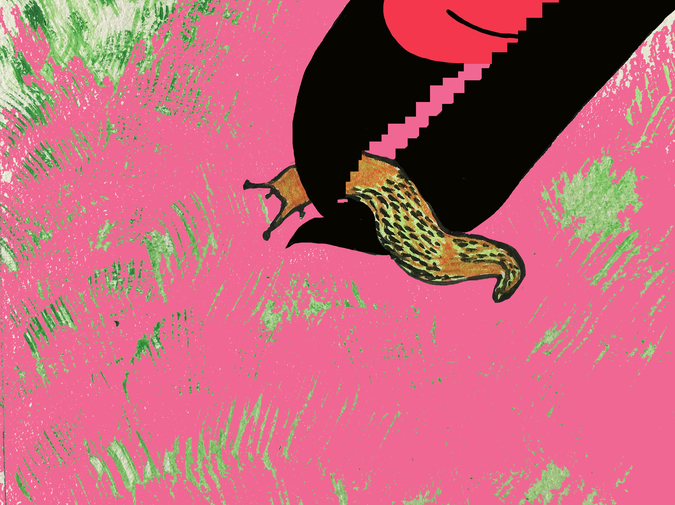 Yoda sat atop the wreckage of his escape pod, still creaking from skidding into the murky swamp hours prior. He planned to turn it into a home, modest though it would be. Quite a far cry from the luxurious senate chambers that he had grown used to. He did not miss it. Not for the lodgings, anyway.

It was raining now, a torrential downpour. It felt as though it would always rain, or at least always be wet. Even when he first landed, when it wasn’t raining, the thick wet blanket of humidity left condensation and standing drops everywhere, to the point that it might as well have rained.

The rain now slapping against his skin was not helpful to his concentration. He wanted to be alone, but the rain felt like a presence in and of itself. He pictured the drops forming around his brow and even endeavored to name a few before realizing that he wasn’t meditating anymore. He was just sitting in the rain, and that being the case, he might as well move onto something more productive in an effort to turn the scrap heap he was sitting on into a home.

The rest of his body released as his mind forfeited its concentration. He felt the dull ache in his knees, the crick in his left shoulder. He knew that old age would find him eventually, but he hoped that his retirement would be a bit more glamourous than mud, rain and fog. He ran his hand along the exterior of the escape pod. It was a fixer-upper, but Yoda had nothing but time.

When his stomach rumbled, he rose to his feet. 900 years of life had taught him that food is everywhere. He had stopped stressing about meal planning by about his 400th birthday. Nutrients were in nearly everything, and taste was overrated. He hopped down off the wreckage, his feet sinking an inch into the mud as he landed. The ground seemed to be alive with all the squirming slugs and worms. Yoda jumped about, plucking the fattest ones from the mud and sucking them down raw, like girthy noodles. Yoda had never had a front yard, let alone one that could serve him his meals.

When he’d had his fill, Yoda went into the grounded escape pod and cleared out more of the wreckage. He never enjoyed tight spaces, being so small himself, but even the semblance of shelter felt like a welcome break from the unforgiving ecosystem that he was now a part of. And besides, it looked like it would be quite homely once he finished fixing it up. It was like the studio apartment he had moved into when he first arrived on Coruscant, albeit without the 98th floor view of the city and the Twi’lek doorman that asked too many questions.

Yoda had nothing with him other than the clothes on his back and the debris inside of the pod. There was no need for anything else. He had left his lightsaber. There would be no more fighting, unless the slugs started unionizing, or if the other creatures here went on the offensive. Yoda still considered himself the top of the food chain and until something else decided to challenge him on that point, he would remain there, in this new hovel, trying to feel at home.

Flapping sounds came from outside, followed by chirping croaks. He had visitors, but he was not keen to meet them. Rather, he craned his head outside of the broken cockpit front, which he would heretofore refer to as his bay window, and saw, prancing about, two winged creatures taller than he was, their eyes wide and inquisitive. Bogwings.

On Coruscant, Yoda couldn’t escape the prying eyes of city-folk who were always wondering what the little green guy was doing. They’d ask him to do triple-flips, and heal the sick, and spin on his head like he did at that one Jedi Temple party. He always declined. He was no show-pony. Yoda figured Dagobah would be different, but here he had more prying eyes, and these just as buggy and pronounced as the previous. They poked their beaks into the mud and began to suck down slugs, just as Yoda had, and he felt a tinge of anger.

“Off my lawn,” Yoda barked. His voice cracked as he did so and his throat felt as though he had swallowed a pine cone. He hadn’t yelled at anything in a while. Something told him he would need to exercise his vocal range a bit more if this is how his neighbors behaved here on Dagobah.

The Bogwings cocked their heads at Yoda, their eyes rolling around in their sockets as if they had no control over them. Yoda realized that, as long as he held their attention, they would stop eating his lawn.

“Nothing for you, I have,” he said from the safety of his window, hoping this would do away with them but knowing it wouldn’t. One of the creatures croaked back at him, holding his stare.

The Bogwing began to survey the window, as if inspecting its stability. Yoda recognized what was happening and did the same. Using his power of deductive reasoning, he decided that the Bogwing would not be able to fit through the window. The Bogwing, however, clearly didn’t have the same power of deductive reasoning. It confidently pranced up to the window, stuck its head inside, forcing Yoda to dodge sideways, and tried to crumple its wingers to fit, but no matter how it folded itself, it wasn’t going to happen.

Yoda rapped the large bird on the beak with the palm of his hand and chuckled to himself.

“Intelligent, you are not. Hm.”

The bird withdrew itself and stared blankly back at Yoda, who ignored him and went back to cleaning up the mess, doing his best to distract himself from whatever was happening on his lawn. He tossed small rubble and wreckage out of the window, half-trying to hit the creatures each time he did. They were too nimble for his lackadaisical aim, and they danced away from each wayward toss. Yoda dismissed his poor aim as not wanting to have hit them in the first place.

There was a particularly large piece of wreckage that Yoda struggled to lift on his own accord. His aching shoulder kept slipping and his back refused to cooperate. He didn’t want to use the force for housekeeping, as it felt like such a silly waste of resources, but seeing as how this particular piece was about the weight of a newborn Trandoshan and the shape of a beam, he had no choice. He grunted deeply and lifted, using his mind and his elevated hand. He headed for the door, but one of the Bogwings, the same that had unsuccessfully tried to shimmy into the window, had poked its head into the hatch that had become the front door, and was blocking the way. It had managed to fold itself such that it was wedged into the door, but could make no progress one way or the other, and it croaked helplessly.

“Away with you,” Yoda said, shooing the beast with a flick of his head. It didn’t react at all, instead cocking its head sideways. “Impale you, I will. Want to, I do not.”

Yoda took another labored step towards the door, then another. He could smell the beast now; he could smell the swamp caked to its leathery exterior. It wasn’t mean or menacing, just annoying, and clearly not capable of reading context clues.

One more step and the rubble bumped into the beast. Finally, it emitted a dull croak and began to squirm its way back out the way it had come. It emerged into the open with a dull popping sound and stretched its wings, hopping around like it was simply overjoyed to be free again. Yoda tossed the piece out of the door.

“Defeat you, I have,” he said, gazing at the beast from the door frame.

Yoda stood there, locked in a stare-down with the Bogwing. If this was the first attempt to knock him off of the top of the food chain, he would not be bested. He was the undisputed stare-off champion of the Jedi Temple back on Coruscant. Unless you count Plo Koon, who wore thick, opaque goggles that never allowed Yoda to see when he was blinking. But Yoda didn’t count Plo Koon, and dismissed anyone who did.

When the Bogwing looked away, Yoda exhaled in victory and turned back into his new home. An intense push slammed into his back as soon as he had completed his turn. He spun on his heels, his brow furrowed, ready to accost the flying devils that had nudged him, but they stood at a distance, five of them now, their heads cocked and flittering back and forth, as if they were just as curious as him.

“Funny, you are not,” he said, brandishing his menacing finger at them. He exhaled again, not in victory this time, but in understanding. He knew what he had to do. He knew that, despite his ultimate failure with the Jedi Temple, and the galaxy itself, that there was nothing more important than his current task. There were certain amenities that Yoda now understood that he could not be without. On Coruscant, he had all the amenities he could ever have hoped for, and it left him feeling spoiled. But here, in the hollowed carcass of a downed escape pod, with caked mud as the floor and a slug flower garden, with another Bogwing beak poking into his bay window and another rain storm rolling in, he knew exactly what had to be done. He had to build a door. Only he had no idea how.