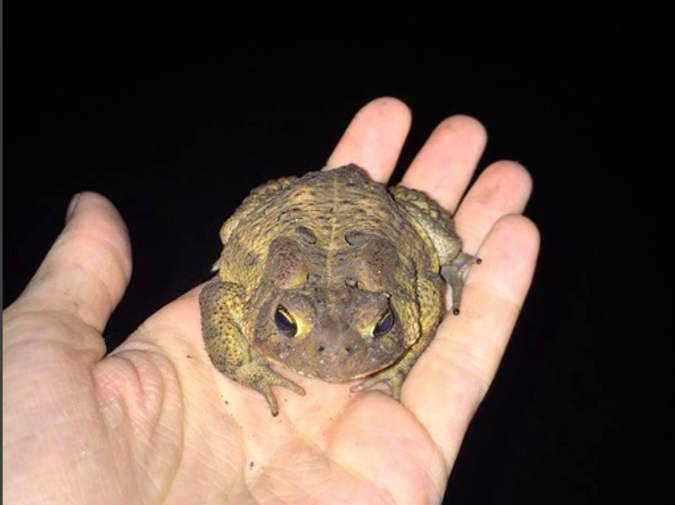 The night I saw you on TV, I thought of the toads.

The ones we carried onto the roof of your house with a slingshot that afternoon when no one was home.

They were the kind that could camouflage themselves, turning from green to gray to rust when we put them on a red notebook.

That was in Ms. Bachman’s biology class.

Ms. Bachman had a lisp, remember.

I had been out near the canyon that night, driving back home from a long trip when it got foggy, so I stopped at a diner—one of those places with red nylon seats and pie under a glass dome that only seem to exist on long stretches of highway nowadays.

There were some truckers sitting at the low counter, drinking several cups of coffee as they waited for the weather to change, same as I did.

One of them asked the waitress to turn to the news, and that’s when your picture came on.

The things they were saying about you.

Both your parents worked late, you assured me; no one would see us up there with the stolen toads.

So you loaded one into the slingshot and aimed past the backyard and into the cornfield.

You let go and the toad sailed into the corn.

If you recall, I had spent much of the previous year at home with an illness.

When I returned to school in the fall, I felt feeble.

My grades were slipping. Biology was particularly hard—at some point the concepts of cellular energetics had become disconnected from the real world, and for the first time I found myself falling behind.

But there on the roof, watching you load the second toad into the slingshot and pull it taut, I could see myself flying out over the cornfields too.

Then you turned and aimed.

As the toad shot toward my head, I ducked and lost my footing.

And it was in that moment, as I was preparing to fall, to roll off the gutter and land, broken, on the driveway, that I thought about what I would tell my parents.

That it was all your idea.

That I couldn’t have thought up shooting toads from the roof.

That I had no imagination.

Or maybe I would land on my neck and I would tell them nothing.

But then you were there, taking me by the arm, reeling me in.

You steadied me, laughing, and standing there on the roof, holding on to you, I felt stronger than I had in a long time.

This is all a digression, though, a roundabout way to say that I want to tell you what I’ve been up to all these years.

About my job as a land surveyor in the desert, and the poison lizards that can you kill you out there, how they blend into the dust, and the special pants I have to wear.

About the girlfriend I had in college, and how she burst into tears when I said she wasn’t very smart.

About all the time spent in the car on the job, compulsively turning the radio dial, looking for a signal.

But most of all I want to tell you about that time in the diner, and how I blinked when I saw your face, looking strung out, incarcerated, bad, next to a file photograph of a pretty woman, smiling, beautiful, carefree.

And the news anchor saying how they were still looking for pieces of her.

It’s pieces that I have, I guess.

The toads, the slingshot, the roof.

Each of these things isn’t much, I suppose.

But taken together, they’re something.

Cameron Shenassa is a writer and teacher from Chicago. His work has appeared in PANK, Chicago Literati, The Wolf Skin, and elsewhere. He lives in Oregon.