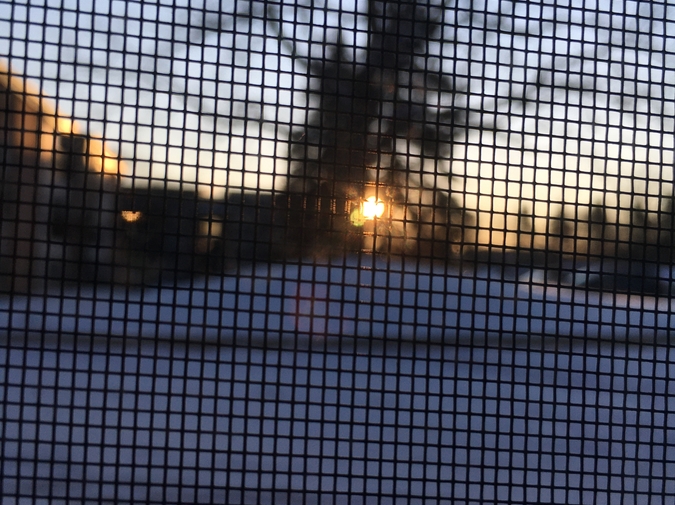 She said: in my home, I want to feel at home. I want to feel as though I am swaddled in blanket, as though the walls pump food right to my gut. I water the plants, all seven or eight, some dying. I feed the cat. I want the air to be humid because moisture is life. How many bugs live here? How many living organisms? What don’t I see. You know, I once was capable of so much love. Come in? In my home, I want to invite everybody in for a their favorite drinks and talk all night with music playing. Come in. I say it not like I’m begging you. I don’t want to recall anymore. I’m done with recalling. I could spend one year painting the same painting, blending all the faults. I could move to a fault line and play this game I’m already playing: anything could happen at any time, assuming time is, you know, real. I watch ten children get sucked into a fault line, no? I watch one moon implode. Here, I’m confusing what happens with what might. What can with what can in my head. I watch a set of angels play make believe. Are you getting this? Are you seeing this too? Two angels now are breathing under water. Now their parents never aged. Now, and only now, their home is lit up like a dry Christmas tree,  nothing but good warmth. I once told a male all I wanted was to be warm. He said he knew it. I want, in my home, to rip my face off, smatter it across the ceiling and say, “Now I don’t have a face. I am happy.” Look into your ribcage…are you all there? Where does your home end and end? Look, I’m speaking into this one side, trying to reach the other, then I’m not even sure there are two sides. Have you opened your windows lately? Have you cleaned the dust and dead house flies from the sill, and the bee? Have you heard the neighbors, the new ones, not the addict who moved out? No cops anymore, no pleading apologies. I’m not about you, but if you come over, I’ll open the windows for you. I’ll give you a seat. I’ll set the breeze to your skin. I’ll be quiet about, well everything. I’ll let you close the window, if you get cold.  I’ll douse my rocking chair and bury my dead horse.

3. She was thirty-five years younger than my father.

4. She had brown hair like me, but blue eyes, which are the rarest. The allele always recessive.

5. In her diary, she wrote that her great-grandfather fled Sicily for America on the RMS Carpathia. He was just a boy and escaping death in the hands of La Cosa Nostra, with twelve dollars sewn into the lining of his jacket.

6. I keep her diary in my sock drawer, next to my condoms and spare change.

7. Once, I thought I saw my mother’s ghost washing the dishes in the kitchen the sink while my father and I watched a Dodgers game.

8. My father said my mother had not been right in the head. He said she was loud and nagging and lazy. He said, had she lived, their relationship would not have.

9. In her diary, she drew little pictures of what she saw: small birds, a lost mitten, a pencil, a lamp.

10. When I have a child, I will cut nothing out. I will sew all our ghosts into the lining of our pockets.

I know this doesn’t sound good, but I promise it’s not so terrible. I used to be really sick, near death. Without going into detail: it was as much my own fault as it was my genetics. It was as much genetics as it was the people in my life not being able to overcome their fear, not helping me during my time of need. I don’t hold it against them now, but most people have no idea how to deal with other people’s pain.

I was getting to rock bottom. It was like Hemingway wrote about bankruptcy: it happens gradually, then suddenly. On the way to the bottom, I vomited in the bathroom at work on a regular basis. My car was a fucking mess. Sticky, sometimes bloody tissues scatterer about. Bottles and wrappers. Stains and smears. Then I caught pneumonia, passed out, hit my temple on the corner of the dresser going down. When it was happening, slowly, then the suddenly, I hid in my room, away from my roommates. I kept my grades up in my classes, because I thought, if I manage do one thing well, maybe I can fool the world.  I forgot to take showers. I cheated on my long-distance girlfriend with a stranger, because I knew the truth: she could never love someone like the real me.

Some people with my problems actually die. I’ve known a couple of them personally. I consider myself lucky that I just visited underworld for a time, hit the bottom and crawled back out.

I went up to New Hampshire for a winter. Only eleven miles of coastline but it’s beautifully cold and sharp and mostly empty. No matter how many layers of coats and long Johns I wore, no matter how warm my hat, the wind cut through.  The lobster shacks were boarded up and the bandstand stayed empty. The waves crashed and crashed over rocks, and seaweed froze brittle with frost. The funny thing about needing time to yourself, about needing to be in a place to be fetal and naked: you never really are alone. The surfers came out no matter what. So did the squawking seagulls pecking at loose shells. So did the stars.

This one night I stripped down and ran naked across the snow-covered beach.  I dove straight into the icy salt water. I stayed there, waiting for the cold to kick in, to feel again. I shivered and stared out across the sea that was heavy and black and did not end until Europe, then turned back to look at the beach. There was a woman. Her hair looked matted and dreadlocked. Her formless sort of body was covered in rags. In her hand she swayed a metal detector like a metronome…back forth…back forth…back forth…back forth. I felt my heart swell, there’s no other way to say it, and it kept swelling until I needed to move and almost couldn’t breath. I remembered, then, that this was the feeling that had me reeling  towards the underworld, towards rock bottom, in the first place. I guess I am a liar, and it is so terrible. Too much love, and no place to put it. Too much love that it can’t be anything but wasted. Too much love in a world like this.

Rebecca Fishow is the winner of the Holland Prize, and author of the forthcoming story collection, The Trouble With Language (Trnsfr Books). Her work has appeared in Quarterly West, Tin House, Joyland, Connotations Press, The Believer, Smokelong Quarterly, and other publications. Her chapbook, The Opposite of Entropy, was published by Proper Tales Press. She holds an MFA from Syracuse University. Find her at rebeccafishow.weebly.com.