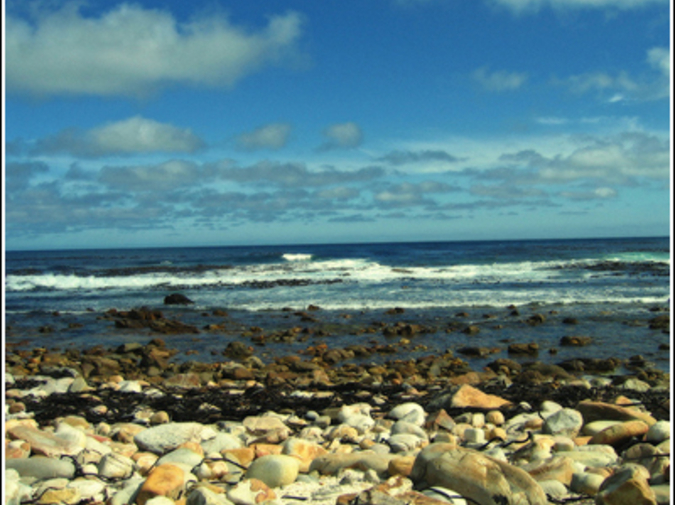 Since Cape of Good Hope

Terry was here with the AIDS people, but I was just visiting. I didn’t know I needed a break until the phone calls from Terry began, calls about native African pussy and hand pounded tattoos and four-star hotels and champagne in Maputo and areolas the size of grapefruits. But when I stepped out of the airport in Zimbabwe, I knew I was the sort of person who would never see any of these things. I had taken too many photos of other people. There was nothing to do in Swazi but buy recycled art, eat Kudu jerky, drink tea. Terry’s co-worker, Amy, gave me a creased paperback ofLong Walk to Freedom one day while I was sitting outside the hospital. Her black hair was pinned up. Her neck looked like it had been painted with milk chocolate. We drank beer at a bar not far from the hospital and I read the book while we sat. When she left, Amy made three clicks with her mouth, which meant (I think) either goodbye or thank you. After a drunken night in his Mbabane apartment, Terry said if I liked the book so much I should see where it was written. The next day we were in a dented Peugeot on our way to the Cape of Good Hope. I had only been a week in Africa. People were dying in the hospital as we left. It didn’t matter what we did. The motorboat took off at such a roar from the dock that a woman fell off the side—she looked like a local, but no one turned around. The mountains surrounding the cape grew small behind us. The woman splashed her arms in the water, disappearing as we moved away. “What the fuck is that smell,” Terry yelled into the oncoming wind over the prow. He pushed his nose over the edge, sniffing at the water slicing the boat. 130 kilometers, I thought, maybe faster. The water looked like stained glass as Rodden Island rose up before us under a blanket of shanty houses. “Dead fish,” Terry said, then sat down on the floor of the boat. “Must be.” On the island, a tall guide took us to see the cell where they had kept Nelson Mandela. Terry put his hand against the concrete prison wall, the guide smiled, and we all went inside. The air was gray somehow, and bars were on the windows. The guide spoke up. “When Mandela was elected president, he made the man who smuggled his book out of prison into Secretary of Exportation.” We all laughed. He showed us pictures of his children, his house, his wife. She had pillowy lips, the whites of her eyes were clean and bright. I admired her soft, full breasts in the picture. “I could use a drink,” Terry said. The guide pulled a silver flask out of his pocket; the liquor burned down my throat. Everything was for the taking.

We mourn Elliot's death at Matador, our bar off Burnside, where the view is low rent apartments, no balconies, a spattering of windows. “Cells,” Dee calls them, and one reason I love her is she says these things. Dee runs her cigarette tip along the ashtray into a perfect cone. Stephanie takes tequila shots across the bar like a funeral wake, her eyes headlamps lighting up at the beginning of the procession. “Today’s music,” Stephanie says, “has everything to offer.” Her glasses slope an inch down her nose. Her black t-shirt is too small for breasts. We raise our drinks. We sing Elliot’s songs. “Certain tribal societies,” I say, opening my shirt, “have designated mourners.” Michael nods in agreement, then lets his head hang. Dee and Stephanie talk emphatically against the booth’s wall about the poetry of Elliot’s lyrics, the powerful sincerity they couldn’t find anywhere else in their lives, screeching the last part, cigarettes trembling between fingers. Dee looks like a rocket ship; Michael is a dead horse, feet in the air. Dee stands up swaying, holds her beer bottle out in front of her like a microphone and mimes, “Is this thing on?” She taps it. “Elliot is dead. What does that say for us who believed in his music?” The bar lights shine on the soft hair of our arms. More drinks. To a middle-aged woman in heels behind me Dee says, “Stop that fucking tapping or I’m going bite those fucking fingers off!”  Dee’s arm sweeps the entire table.  Ashtrays, cigarettes, and various glasses, empty or brimming, run full tilt to the edge. The bartender, Meg, brings me the broom. The wood handle cracks against the bar. Dee throws back a shot and yells brandishing an empty beer bottle, “God damn you!” She heaves it at the jukebox. There are sparks. Music stops. That’s it, Meg says. I look down at my naked chest. It must take such force to bust through and pierce the plate. I touch with the tips of fingers.

They said they needed a blood sample, she says, something bad is going to happen. Dreams, Eugene says, nothing will happen. Yes: cancer. Eugene crawls out of bed. I’ll be fine. Karen covers herself in the blankets. You’ll be dead. Jesus arrives, Jeremy says upstairs, Lufthansa. Lufthansa? Eugene asks, looking for the milk, Jesus? The last words of my dream, he says. At security, a young man in a Lufthansa vest calls Eugene over. Step right up. He takes Eugene’s boarding pass, his license. Step to the microphone, the man begins rapping. There’s only one way, one faith, only one way to go. Eugene takes off his shoes. The back wall of the airport, the jets. Eugene on the phone. Look, I can’t hear you very well, this thing’s staticky. You should have listened, she says. This is the last call for all passengers needing to board Flight 107. Eugene regards the ice. Remember to secure your own oxygen mask before attempting to assist another passenger with theirs. With his finger, Eugene writes his name on the window. In case of emergencies, please look around. Exits may be behind you.