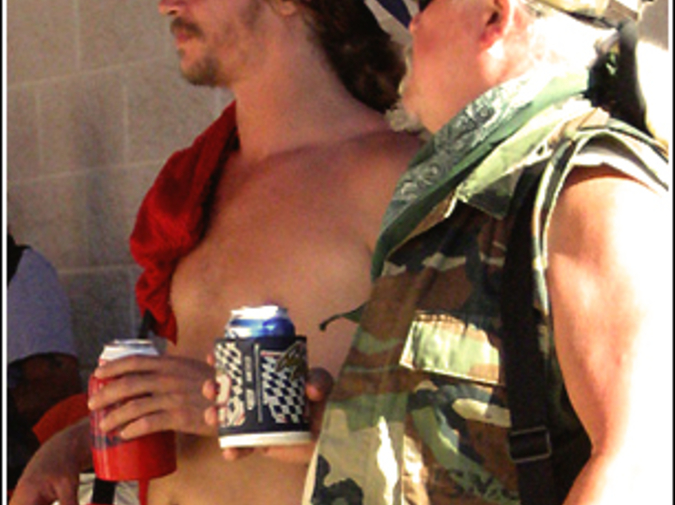 When I was sixteen, my dad's new wife and her daughter, Mary Ann, moved in, so I had to get out. I found a burned-out one story place on Corey Road near the gas plant. When it wasn't raining, you could see right up through the roof to the stars. I took Janie Fullerton there because I told her I could get coke. I couldn't, but I had some pot. I fished a mattress from the backyard and pulled it through the high wet grass into the wood-floored family room. Rain leaked through the rafters. I lit a candle. I got so high that my hands were like sandpaper, feeling nothing, but rubbing everything. Janie Fullerton let me touch her over her bra and underwear. No skin to skin contact, she said. And when you get ready to come, tell me so I don't get it on my hands. Can I take your picture? I said. So I took her picture with my Polaroid and then we started. I pretended she was Mary Ann, my new step-sister. Try pressing harder, Janie Fullerton said.

I was gone for days at a time. I was leaving because I'd catch Mary Ann coming out of the shower; because she had pale skin the color of bone and dark hair and brown eyes with splashes of green; because I fumbled my words around her. I was leaving because if I didn't I'd plan my nights around her showers. I turned off all the lights in my room and watched her room down the hall, where she'd sit on her bed with her towel on talking on the phone. It felt like a show all for me, how she sat there with her door open. I figured she knew I was watching. She'd hike up her towel and then pull it back down or cross her legs and uncross them and cross them again or let her towel fall from her chest and pull it up quick and whip her hair around like she was a model. One time she caught me and said: Oh, shit, that's so lame. And another time she said: Do you ever hear when your dad and my mom are fucking? I wonder what it'd sound like if we fucked? I was leaving because I turned off the flash on my Polaroid and took her picture while she was dressing and I stared into the picture and masturbated into an empty Gatorade bottle that I kept underneath my bed.

One time, I found an old lady. I was getting on my bike down at the dirt road behind her house when this lizard crossed the road and left a trail in the dirt, these little lizard-feet imprints. I looked at the trail for a while and then dropped my bike and went up through the woods to her house. It was a white two-story with a screened-in porch. It looked empty. There was an electricity right before I touched the handle and tried the door. The door came right open like I was invited. She was in the living room and I smelled her before I saw her. She was done up with make-up and a wig and flies buzzed around the wig. It was the first dead body I'd ever seen. I'd seen dead dogs and cats and a pig one time and a lot of birds, but never a person, so I took her picture with my Polaroid. I tried different angles, turned lamps on, then off. I took the dead lady's photo from down the hall, from next to the window, from right up close, washing out her face. That was right about the time the cops pulled up and asked what the hell I was doing and I turned and ran. The cops tackled me and found my dope and cuffed me and put me in the cruiser. They took my picture at the police station. It was strange. Being on the other side of things. When they all came to bail me out, Mary Ann watched me through a window in the Deputy's office and watched the Deputy hand me back my camera and watched me come down a long hallway, the Deputy behind me. She was watching me.

Alan Rossi has stories in Juked, Ninth Letter, The Journal, Zone 3 and others. He was a finalist for Best of the Net in 2006, received an Honorable Mention from the AWP Intro Journal Awards in 2007, and won the Garth A. Avant Award from the Center for Writers in 2007.