Those Things You Do 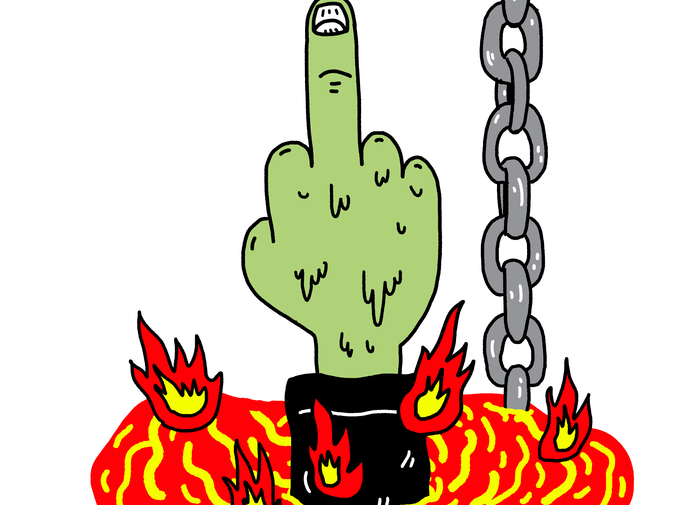 You steal a glass mug from the office kitchen every month. You display the mugs on a shelf in your bedroom. You don’t use them, don't even dust them. They sit like filthy black statues above your headboard, mustard colored company logos facing forward. You used to think you’d return them all in a giant box the day you left for a better job. That was a few years ago. You’ve never seen someone replacing the mugs, but whenever stock gets too low, a bunch magically appear.

You keep a calendar on your desk. You draw a check mark on it each time that vaguely familiar coworker greets you when passing by in the hallway. You promised yourself that if any single day exceeded ten check marks you would repeatedly head-butt them while screaming, “Hello! Hi! Hey there!” but when that day comes and the eleventh check mark is made, you just sit at your desk continuing to fail.

You blast Carly Rae Jepsen’s “Call Me Maybe” through your headphones to avoid hearing Charlie’s daily three pm suckfest with those gross-ass caramel candies he keeps in the most crinkly plastic bag ever made.

You focus on the glistening mist of saliva coating your glasses post in-your-face lecture by half-your-age manager telling you to start taking more initiative if you want to move up in the absolute trash company you work for.

You overhear coworkers discussing how anyone who doesn’t get their news from Infowars just isn’t woke enough for them. You look at the mini-fan on your desk and enter a vivid daydream where you shove your hand into the spinning blades while screaming, “LORDY, LORDY, LORDY, THIS IS THE END!” as blood and bone chips fly everywhere and the coworkers start puking on each other’s sweet Nike dress shoes.

You think about how there is actually no room to move up in the absolute trash company you work for, but you need your job because the student loans that will haunt you for all eternity have not been paid off, so thank God you wrote that fifty-plus page thesis on Margery Kempe back in college because without it where would you be now?

You sit in the weekly meeting listening to how much revenue the company is generating, that things are really looking up despite recent layoffs, though more layoffs are probably imminent, but after the meeting there’ll be free pizza. One slice per employee!

You eat the same mediocre sandwich from Pret A Manger every day. By the fourth bite it feels like you’re chewing on your own bitter regrets. Still, you will shove that sandwich in your mouth again tomorrow because Pret is so close to the office, and though you are not yet ready to walk an extra block for something different you’ll think, Maybe one crazy day, lol!

You watch your work crush as they type things like “High priority files for Sara,” and “New SOPs for Team C,” into a Microsoft Excel spreadsheet. You’ll never ask them out since they’re an office seven, which is a real world five, and you’re an office five, real world three, plus they’re married, so you just stare at their overgrown cuticles and listen to the rat-tat-tatting of their fingers smashing the keys.

You peel off the Scotch Tape someone stuck to the bottom of your mouse. This is a funny office prank that makes you believe the mouse is unplugged or something. A couple coworkers are snickering in the neighboring cubicle. They got you again, didn’t they?

You listen to Lauren (still unsure what her actual position is) explain for the millionth time how she’ll be out of this shit job soon because she has some big opportunities coming up, “Just you wait, just you wait,” and you want to tell her you’ve been waiting for six long, boring years, and the only opportunity you’ve seen her get is that second free slice of pizza she’s managed to sneak, so please kindly fuck off and let me eat my Pret sandwich in whatever version of bootleg peace I can achieve before going back to the stack of vague and absurd paperwork waiting for me, but instead you smile and nod and say, “Nice,” and envision a SWAT team bursting through the windows, bullets spraying everywhere, while you calmly apologize and excuse yourself from the conversation as Lauren makes a desperate attempt to flee but is tackled and brained with the shitty aluminum thermos she carries around that reads “Is it the weekend yet?”

You play along and pinch your nose when people say, “What’s that smell, got your stinky feet out again? Haha!” all because of that one time, four years ago, when Tom saw you remove your shoe to dump out a pebble.

You avoid office parties because coworkers are just walking reminders of your failure. They call you a cynical asshole and you say you’re not a cynical asshole, you just lack the ability to compartmentalize the crippling disappointment slowly eating your soul. You realize, however, that maybe you are just a cynical asshole—not the cool, edgy and deceptively wise kind of cynical asshole, but just some dumb schmuck with a chip on their shoulder, someone who downloads a phone game then puts it on easy mode to destroy it and feel like a god.

You watch movies so you can cry. You don’t cry much IRL but the end of Logan has you bawling like the time you saw Stallone in Rhinestone and learned even gods can let you down.

You realize that ninety percent of your social media comments can be translated into: “I still exist, right?”

You inspect a huge, embarrassing zit in the bathroom mirror. A coworker walks in and makes the classic go-to sarcastic comment, “Don't worry, you look great!” and all you want to do is follow them back to their desk, poison their coffee with skin-eating bacteria, drink it yourself, and laugh while it consumes your entrails in front of them.

You acknowledge things could be much worse, that there are people in war-torn countries, living on the streets, without limbs, but that really only serves to make you feel shitty and ashamed.

You resist the urge to smash your head into the wall because that’s just not a cool thing for a responsible bill-paying adult to do in a corporate office. So at night, when no one’s around, you punch yourself in the face a few times and aggressively whisper how much of a fuckup you are. There’s an initial rush, then you’re just standing there feeling like a stupid idiot with welts on your head and a throbbing red nose.

You ignore the sudden impulse to bash your office mug collection and dance barefoot on the broken glass shards. Instead, you brush your teeth and get into bed because you have a busy day tomorrow!

You walk into the office bathroom the following morning. Only one stall door is closed. Someone inside the stall is blasting Michael Jackson’s “Rock With You.” You peek under the door. They don’t even have the decency to tap their feet to the rhythm. You moonwalk back to your desk, snatching another mug on your way there. No one notices or cares, not even you.

Michael Seymour Blake’s work has appeared or is forthcoming at Queen Mob’s Tea House, Barrelhouse, Fanzine, Flapperhouse, Entropy, Waxwing, Corium, Paper Darts, People Holding, Hypertext, Heavy Feather Review, and Reality Beach. He has painted various murals around NYC, including one that was prominently featured at Silent Barn in Brooklyn, home to the new Mellow Pages Library. He lives in Queens.