This is my brain on baseball 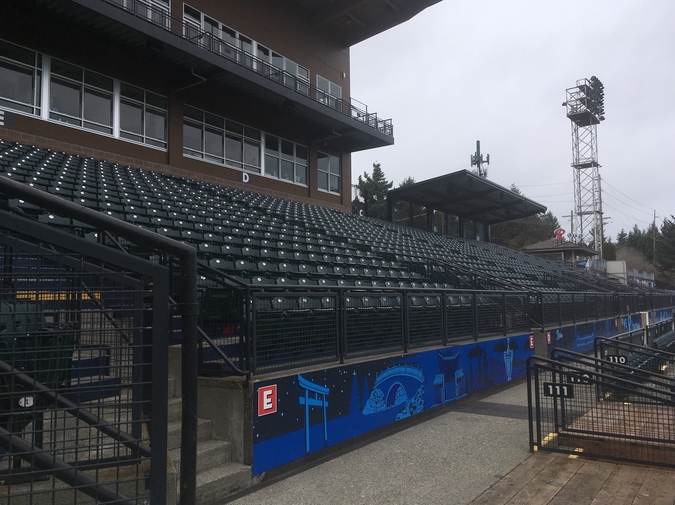 Crack! The sound of impact, ball on bat—it soars (ball not bat), and you lose sight of it in the lights or in the sun or behind the guy in front of you who bounces out of his seat at every play, or so it seems, or maybe it’s out of sight because it’s out of mind—your mind’s eye, that is—as your thoughts soar far afield to other places, other times, other things, thoughts that float through luminiferous ether—once believed to fill the vacuum of space like amniotic fluid—thoughts that enter your stream of consciousness with the air you inhale and exit with the expired breath, maybe it’s an irksome wrinkle in one of your essays (how would Joan Didion say it?) or the post-mortem of a recent conversation (what did he mean by that?), until extraneous thoughts subside when the crowd’s cheers or jeers bring you back to here and now—the first row of the upper deck at Petco Park, overlooking third base, on a balmy San Diego August evening—to see it (the ball) caught by the left fielder with an acrobatic leap in the warning track.

You rebound, once again immersed in every pitch until the next lull when your mind takes wing again, that’s the ebb and flow of baseball, part of the joy of the game, of being there, so no, it’s not because the Padres are such a hopeless, hapless team—they’re your home team and you’ll root for them through flood and drought, good times and bad (unless they’re playing the Yankees, your beloved Yankees)—and no, you don’t have a problem with the pace of the game, even the long gaps between innings in deference to TV ad revenues (because it’s all about the money though you don’t like to think about that), you stand up in defense to those who say “aagh, it’s so s-l-o-w,” those people who want, need constant motion, their days and nights filled with nervous activity, electronic devices in hand and thumbs ready to fill the slightest pause, “how can you stand it,” they say, “just sitting there waiting for something to happen” (it’s as if they’re saying: “please don’t leave me alone with my thoughts”); but look, you say, watch that pitch, watch how fast it hurtles to the middle of the plate, and think about the batter’s split-second decision, to swing or not to swing—is it low, is it outside, should I take it?—to swing, in this case, swing at air, because the ball has cut to the outside corner—“Stee-rike!—and since scoreboards now register the speed of every pitch (it wasn’t always possible) we know that one was 95 mph—wow, 95!—or maybe, ho-hum, just 95?, since fastballs are topping 100 as often as not these days, a function of precision, control, and physics—Newton’s second law of motion, you’re told, having to do with the velocity of moving objects and mass and force, all beyond your comprehension—and all those numbers, they make your head swim, stats galore, stats updated after every at-bat, every indicator that can be tallied, so, for instance, a brown-eyed rookie shortstop from Kentucky just called up from the minors gets a hit on his major league debut, so right now he’s not only batting 1000, he leads all brown-eyed rookie shortstops from Kentucky—king of the hill, mom and dad in the stands, he’ll bask in this moment because it’s all downhill from here—and you think about your grandson, who is the same age as Mike Trout (just ten days apart) and who looks like Mike Trout (when he’s healthy—your grandson, not Mike Trout) and who was a Little League slugger, a pitcher too, an All-Star, but gave up baseball in high school, and you think what he might have done if he’d stuck with it and not messed up, but you can’t go there now, you’re here to relax and have fun, so you snag your brain back from its flight—take control, focus, you tell yourself—and then you’re saved by the sound of impact, ball on bat—Crack!

Alice Lowe reads and writes about life and literature, food and family. Her personal essays have appeared in more than sixty literary journals, most recently Baltimore Review, Stonecoast Review, Eclectica, Room, and Pilcrow & Dagger. Her work is cited among the Notable Essays in the 2016 Best American Essays and was nominated for the Best of the Net Anthology. Alice is the author of numerous essays and reviews on Virginia Woolf’s life and work, including two monographs published by Cecil Woolf Publishers in London. Alice lives in San Diego, California and blogs at www.aliceloweblogs.wordpress.com. She dreams of another Yankees-Padres World Series during her lifetime.