Thirteen Halves of the Story 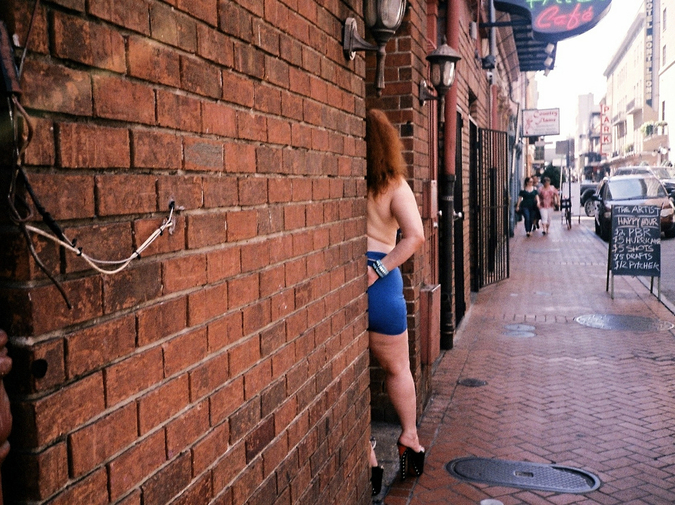 E says the sky is fuller today and I say it isn’t. Meaning we aren’t significant so why would our surroundings be. We walk to the store fixed on the stoplights as they change. My mother calls and I note the time. Exactly one hour—no less for my composure, no more for hers—before I phone in my absence. I gave up meat for E. He swore off strict vegetarianism for me. Our middle ground is halibut, salmon, trout. For the holiday it’s sea bass. The fishmonger wraps it in plastic, then paper, seals it with the price tag. Walking back, the juices leak from the package, wrap E’s wrist, form a sixth finger on his hand. He’ll hand me the fish when we cross the threshold, say “Hold this.” Which really means “I carried it—that’s half—now you prepare our feast.”

J goes “Go faster” but thankfully I’m driving so I only speed a little before slowing back down. She doesn’t notice. Her arms bleed out the window. I think spider, octopus, puffer fish. I think fishing line, wrecking ball, scaffolding. I think speed is an organ needling everyone in the world but me. J goes “Don’t you want a Diet in a can” and we stop, only I know I would’ve driven for hours more, no hunger, no cravings, no ache. I never buy gummy worms or almonds but in my mouth this time they aren’t just spoils. They are fuel, weight on the pedal. What is it to have a need for speed when you are going together. What about alone.

I’m with the ocean even as E’s hand moors mine. We walk to the pier, our words like blink, like strain, like yell. The pier is older men, fishers, children too close to the edge, children unguarded under an enormous sky. We are no one’s likeness on the pier. I almost ask “Does my hair look windblown? My face?” but the din has already answered it does, they do. We walk the length of the pier, circle back, don’t even pretend to pose for the photograph we’d already failed taking. Next is frozen yogurt near the public landing. How do we know to file in line and weigh blueberry over buttercream, cinnamon stick over pineapple tart. Still the seagulls crowd the boardwalk, call out into the night. Still we lead each other’s way.

B writes “Come to the show.” B writes “This band is singing your song.” A week later it’s “This beer’s got your name on it.” I wait two days, six hours, forty minutes, write “Can’t—head cold.” When two weeks come, go—no suggestions, no pleading—we meet on the Green Line between our stops. Eventually the bartender stops checking, sees this will last all night. From the toilet B writes “You brought your toothbrush, right?” Already I’d envisioned the morning. Here is his top button unbuttoned, my flat dangling off my heel, both of us pretending neither is the one who wants it most.

J goes “My uterus hurts” and I want to help but don’t know how. We eat sushi and bow princesses to our sake. Another sketched moon, or close, but we never admit our ignorance of it emptied or full. Walking home J goes “I’m drunk” and I tell her again how if she was a man I’d rifle her onto my bed, pull her panties down, marry her in the night. I say “I would not let you board the plane back.” Which is her cue to lower her voice, talk deeper, mumble, mumble, lasso, lasso, lasso, cactus, spur, high-ho!, her arm gentle in my arm before I unlock the apartment door and we release.

Two weeks in and already K’s learned where I bury my nose. He emails questions lined with the bellies of worms. I pucker like a trout. I quote Richard Bratigan, Jack Handey. I tie my shoes together, face forward, face plant, scan my periphery to see if he stutters before lifting me up. On the phone, K’s voice is an octave too high. I want to pinch him to see if he’s real, forgetting how I remember his timbre kinder when it’s gone. Forgetting everything there is about love—how often it’s a religious burn, less the time to ruck up the ghosts you’ve set free, which good God, can take years.

E says “Lets meet at 5—the parking deck that’s never full.” I pull in, wish for a cigarette, a lollipop, a toothpick soaked in tea tree oil. Another 10 dead, a horse meat scare, a weekend poem both sad and flippant: trains collide, the survivors aren’t among the dead. Turn off the radio, flip on the light. Read Talk of the Town, only we don’t live in New York, not ever. Twenty minutes later leaning against the hood, I think motorboat, tractor, golf cart. I think mountaintop, ocean front, plateau. E approaches rapidly meaning “Where were you” is the question I earn. Only I’m in the car first, so used to waiting now. And no explanation voids feelings I’d be an adult not to hate.

I’m with K, his eyes closed, his hands pulling couch pillows surrounding him to his knees. Is he reaching deep to pull out a speed organ, a mongoose, a dough-centered earth? “When I first held you, when we first embraced” he says, eyes still closed, a pause inside a longer pause. That’s the deepest he goes. My slits run deeper. He eventually says words that for the moment swaddle the vacant space: love, fortune, fate, truth. Yet each word expands too quickly, bursts before it’s too late. There’re only windows here—no scaffolding, no frame to support even the tiniest breaths in the world’s tiniest home.

I’m with M and think “You are not the only man I didn’t sleep with.” There were others—clearer eyes, better teeth. Said less by way of greeting than the unsaid in M’s charming smile. I’ve sat statue-still long enough with language before me to trust I can move it around. “But those faraway stares in your eyes even my body cannot focus.” There’re plenty of lovers I haven’t had. That if I said stop, they’d calmly rise and leave.

S serves chocolates and berry tarts and unbuttons her shirt for her boy to nurse. She says “Dig in, don’t wait” so I chew slow bites slowly, thinking she’ll catch up. The boy starts to fuss but even him I interrupt: “San Francisco, Denver, hell Minneapolis has more appeal than here.” Then it’s “Even Pittsburgh might do.” The boy is red-faced, saddened and aglow and near sleep all at once. S smiles in my direction, and I want to ask her about ease, without which, I mistake even my own voice for the lulls of a bedtime routine.

After work B says “Let’s take a walk.” I think “I cannot go out for I just came in.” He puts on his jacket. Keys in hand. What energy to protest. Feet barely on the sidewalk when B says “I wrote a poem today.” He says “I was solicited for two more.” He says “Can I read you what I wrote over dinner?” I forget what words inside me stirred in the afternoon. I think journalist, lawyer, politician. I think maple leaf, pinecone, chestnut shell. I want the clouds to move faster over the sky, remind me that the moon was jilted there before anyone pointed it out.

The bar is crowed but really it’s just S and me. And if we don’t know whose idea it was then whose idea was it? S says “I’m tired of doing everything.” She says “He’s forgotten how to love me.” Our salads turn us into sounding boards, even when these dishes aren’t ours to clean. First it’s Elliott Smith, Etta James, Siouxsie and the Banshees. Then it’s third rounds on wine, meringue to split. We don’t say it but inch closer to our separate homes with every complaint.

I’m with E. The gas station is the gas station we’re used to pulling into. Walking inside I wonder “Is it used to us?” I don’t look the cashier in the eye when I buy cigarettes, and I don’t wait till we’re on the freeway to light one. I react to E’s reaction before it comes. I think somber, serious, mindful. I think independence, decision, right brain right brain right brain. He turns up the volume three notches. Still there is stillness when I enunciate Russian words I do not know, did not know before, will never know, only have half the mind to sing unlike myself and off-key.