They Also Use Tools, and Are Capable of Making Plans 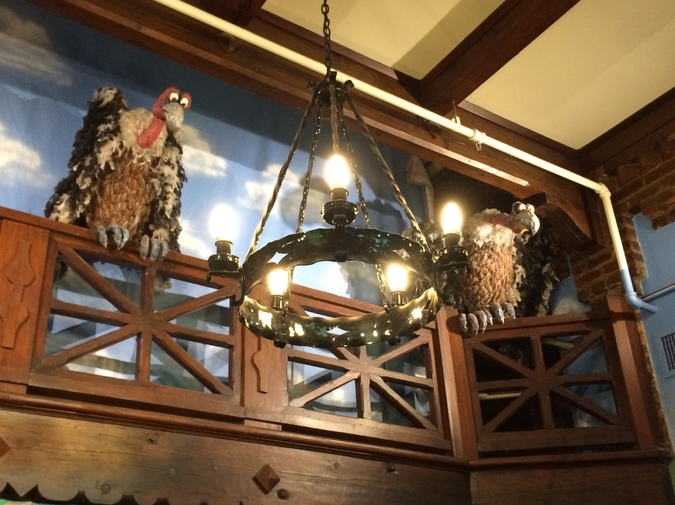 Look at those fucking crows, Mona said.  She and Dan and I were sitting on our porch, drinking vodka tonics and staring at the view, which was pretty good with the sun going down and the corn in the field between our two houses almost ripe and ready to harvest.  The field belonged to a farmer a little deeper in the valley, but its acre-and-a-half of snaky green rows divided our two properties.  We’d been talking about the break-ins-- equipment getting stolen from our neighbors’ garages, mostly mowers and power tools, stuff that was easy to sell.  Mona hadn’t noticed her snow blower was missing til she went into her storage shed, looking for canning jars.  She didn’t need it now, she said, but she sure as shit would in a few months.  We told her our tile saw had gone for a walk, too, along with a tank of acetylene.  The Yoders had lost a rototiller and a new cordless drill, still in the package, that Helen had bought for an anniversary present and hidden in the barn.

Then we heard the caws, and when we looked toward Mona’s house, the galvanized roof and two enormous sugar maples rising above the green, we could see the black shapes swirling like charred paper.  Those fuckers are going to shit all over my yard, Mona said.  I hate those fuckers, Dan said.  He liked Mona.  We both did.  She was curvy-- three kids-- and had a wide, plush mouth that pulled like taffy when she laughed.  The day was hot, and sweat glistened on her throat.  They’ve been roosting in the trees the last few nights, Mona said.  I can see them right through my bedroom window.  I’m tempted to fire off a few shells, scare ‘em away.  You be careful, Dan said.  I’m careful, she said.  Crows are smart, I said.  They can remember faces, and they attack people who tried to hurt them.  And they can communicate that information to other crows.  Dan and Mona looked at me.  Dan frowned.  I read an article, I said.

Well, I don’t know about that, Mona said, but they sure can shit on a clothesline.  Did I tell you some of my laundry went missing, too?  Same time as the weed whacker?  Two blouses and a bra.  One of those blouses was my favorite, too.  You know the white one with the cap sleeves?  I wore it to the Fourth of July picnic? I’m just glad I hang up my panties in the bathroom, or I bet the pervert woulda grabbed them up, too.  I shook my head and sipped my drink.  This world, I said.  I know it, Mona said.  You just be careful with that shotgun, Dan said.  Remember you got kids in the house.  You think I forgot that?  Mona said.  She tipped back her glass til the ice slid into her mouth, crunched the cubes, and mounted up on her ATV.  She was wearing a short white skirt with black leggings; the ruffles flipped up like a little wave as she settled into the seat.  We watched her ride up the driveway out of sight, then followed the sound out to where we knew she’d turned briefly onto the highway, hugging the shoulder so cars could pass, and then down her own long gravel drive.  The crows flew up from her maples, then settled.  It reminded me of tickertape parades, soldiers celebrating the end of the war, that kiss in Times Square.  I opened my mouth to tell Dan, shut it.

It rained that night and the next, and the roof in the bathroom started leaking again.  I put one of the cat’s old litter boxes on the floor to catch the drips.  At work I couldn’t concentrate, kept misplacing the patients’ files and hitting the wrong buttons on the computer, so they stood there waiting for their bills, sighing like they couldn’t believe I was wasting their time and running their tongues across their newly-cleaned teeth.  The sun came back, and the heat, and the water stain on the ceiling turned brown at the edges.  Was it shaped like a fan?  A wing?  Something opening or closing.

I went to bed while Dan was still up, and woke up alone.  Without his body there to block my nightly pitch and roll, I’d wandered all the way to the far edge of the mattress.  I made coffee, gazed over the tasseled ears toward Mona’s house.  A plume of crows hung over the green.  By the time they found Dan, the crows had already taken one of his eyes, and they’d pecked at the birdshot wounds on his face and chest as if trying to extract the pellets themselves, a rude surgery.  Dan had been too weak to fight them off or run, his ankle broken in the fall from the tree, but he’d held onto the duffel with his bolt cutters, Mona’s nail gun and car battery charger. He’d even managed to get the clean white skirt, had folded it gently on top.  By then, I didn’t want it anymore.

Juliana Gray is the author of the poetry collections Roleplay and Anne Boleyn’s Sleeve, and humor pieces at McSweeney's Internet Tendency and elsewhere; this is her first published short story.  She teaches at Alfred University, and is on Twitter @JGray_Writer.