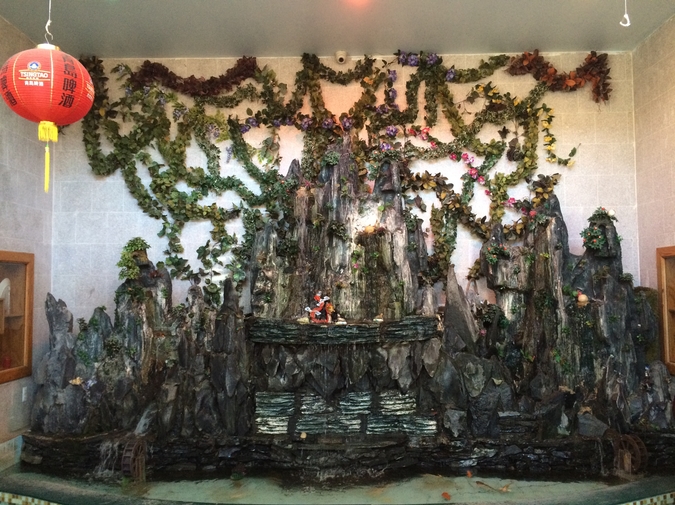 On my last night in Zhenjiang, the three other laowai and I—each of us western foreigners: three upstaters and a guy from Toronto—walk the condominium-lined miles out to the banks of the Yangtze river. Seeing nothing in the dark but the walkway lamps around the waterside park, and hearing nothing but insects and the sound of a few locals urinating into the bushes, we slouch back toward our rooms at the international school where we teach, hoping we'll find the gangs of dancing grandmothers along the way.

They're out each evening in rows and straight lines, elderly Madelines moving in rhythm to the music on their boomboxes and getting down the whole time. They wear track suits and loose clothes to exercise in, and the competition for who gets to lead each dancing group is, we've been told, always fierce. Knife-and-chain affairs under the bright lights of a public park or an open-air mall, every single time. Tonight, in the corporate square off Zhongshan Road, the old women are dancing, and so are some of the men, husbands and widowers, all of them right in step behind a local community leader who's brought their oversized Pikachu costume and a pair of bright, white sneakers for balance. Above and around us, unfinished and empty high-rise apartment buildings perch like sentinels.

The old women move with arms outstretched, limbs flowing over each other in waves, fingers splayed at some points, close together at others in time to the music, but always that look of intense focus on their faces. Claps and stamps of the feet as the grandmothers promenade or, when there's a heavy beat, a march of dozens and dozens of comfortable and well-fitting shoes that tromp down onto the concrete, Pikachu leading the rows of the elderly behind him, with two teenage girls on either side, both of them dressed in track suits like the grandparents in the rear phalanx. Tomorrow, before a silent shuttle ride drops me like parcel post into Nanjing, before it's wheels-up into Shanghai, I'll press my writing students for the truth in our last class together, and they'll tell me that the empty high-rises have been built for laborers they hope will someday come to the city. That the teenagers leading the dancing groups are volunteers and are not, in fact, paid by the provincial government to smile widely and bop along to the beat like we suspect.

The other foreigners and I sip bottles of cold water purchased from the vendors who've brought their carts over to Dashikou Square for the evening, and we watch the sexagenarians move in great circles around the edges of the park. They spill out onto the walkways, splashing and sticking to the rails and concrete steps, pit stops should one of the grandmothers decides her team needs a breather or a replay on how to boogie just so. In other, smaller parks around the city, splinter cells of dancers chock up the walkways and the lit spaces with their lithely arthritic bodies, and the pop song played is different among each elderly tribe.

Up and down Zhongshan Road, nestled between department stores and pharmacies and banks, the concrete, hollow towers loom over the skyline. Skeletal cranes vault up alongside them, dotted by red safety bulbs and guide lines on the ladders, but there's always a single, booming spotlight of white at the top of each of them, the brightest of which looms over the park like a beacon, and it's how we've found our way back from the river. It's our Polaris, guiding us through the emptied construction sites that swell up around Zhenjiang like newly forgotten headstones.

That night, in between the echoes of stereo pop tracks, we walk through a half-completed tourist center near the river, with an ornate wooden lamp dangling down from the ceiling, but with planks on the floor and sawdust in the corners near the open entryway. We stumble past a small market between two empty showrooms of a great plaza, with plenty of parking right outside, past the boarded-up storefronts in the underground malls and the stilled escalators that lead down into abandoned playgrounds for the children of consumers who'll never buy a thing. In Zhenjiang, a cramped city of three million, there's enough room to hope that this will change.