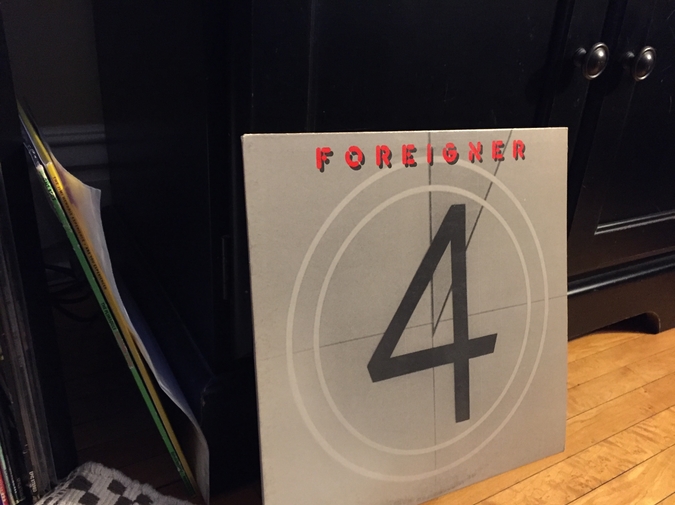 My early exposure to rock and roll came mainly from the TV show Solid Gold, which built its prime-time success on a simple formula: Top 40 hits + family-friendly sex. Each week, bands lip-synced their chart songs while the scantily clad Solid Gold Dancers interpreted the music in their corny/suggestive way, and every now and then a dirty-minded puppet named Madam made bawdy jokes and—at least once that I can remember—lascivious observations about host Andy Gibb’s ass. Each week, my mom, three little sisters, and I watched Solid Gold while my dad sat nearby reading novels and smoking, but other than that, my home had no music. I was aware, somehow, that people tended to get intense feelings about the bands they loved and that music had Mystery, capital M. But my family was not intense. We were American cheese on Wonder Bread.

And then, the year I turned eleven, my great aunt Violet visited. She visited every year, coming out alone from Minnesota. I loved Violet but was a little afraid of her. She had had polio as a child and walked with a limp and suffered from pain that sometimes made her cranky. The fact that she never married made her seem strange, too. To her credit, Violet loved “Elvira” by the Oak Ridge Boys and always held out her fist like a fake mic so everyone could chime in on the “oom-pa-pa mow-mow” parts.

Her gift for me that year was a small, red, ball-shaped transistor radio on a keychain. She showed me how to turn the dial to tune it, and twisting that dial was like opening the lid on a jar of fireflies. Wonder came out. I quickly found the AM Top 40 station, KCBN. The DJ banter implied a community and a nightlife that I envied. Teens called in to request songs, and their voices were broadcast all over the city. This was in Sparks, Nevada, a small, embarrassing suburb of Reno. People said they were at parties or might be out dragging their cars, later, on Edison Boulevard, and the songs they requested would set the perfect mood. My imagination raced.

I was particularly drawn to “The Battle of the Sounds,” a call-in-and-vote show that pitted two songs against each other. I can still remember the opening bumper: It’s 9:40, and as is the tradition here at KCBN, it’s—(explosion sound)—(echo-y voice)—THE BATTLE OF THE SOUNDS. (Music clips from the three songs with the longest winning streaks)—It’s the eye of the tiger it’s the thrill of the fight—hooooold me now, it’s hard for me to say I’m sorry—I love rock and roll, put another dime in the juke box, baby!

Every night for what was probably a few months, that explosion sound rang through me like my own tiny act of subversion. I huddled in my bed in the dark, stealthily listening after bedtime, though I never dared call in. I didn’t know enough to choose the better song. I longed for the day when I’d have an opinion so strong.

One day after school, doing homework with the radio on my desk, I heard a song. The song. “Juke Box Hero,” with its hypnotic bass line, its climbing and swooping tempo that perfectly matched its dramatic storyline. Foreigner’s masterpiece tells the story of a boy who can’t get into a sold-out rock concert, so he stands outside in the rain and listens—and it “just blew him away.” The next day he goes out and buys a used guitar. He starts rockin’, and pretty soon he’s a star—a juke box hero.

I grabbed onto that song hard. It was already past its prime by then, sliding back down the Top 40—it would never be on the Battle of the Sounds—but that didn’t matter. If the radio released fireflies, this song was an eruption. Life was full of challenges and dreams. You could fail at things, then turn around and become a hero. I could be a hero. Or something else! After all, I failed all the time.

Images from the song swirled in my mind. What was it like to live a life? A real, grown-up life? I called KCBN to request the song and lay for hours on my bed with the red radio, waiting for them to play it. At the Roller King, I glided over to the DJ and said, coolly, “You got any Foreigner?” and he said, “Juke Box Hero?” and I nodded knowingly, like, good choice, man. We were just two dudes who knew about rock and roll.

I skated round and round the rink, waiting. Some kids were breakdancing in a circle over by the lockers. DJs never played my song, but still I felt cool. I had grasped the Mystery. Everything was out there.

That year I began begging for a stereo, and eventually my mom took me to K-Mart. We chose a model with a turntable and an 8-track player, even though most stereos had cassette players by then. The 8-track, on its way out, was a lot cheaper. I bought vinyl anyway. First record: Foreigner 4. The sticker on the shrink boasted in bubble letters that this record featured the hit song “Juke Box Hero.” I forgot about the DJs for a while and played that record again and again, studying the lyrics on the insert. The songs painted pictures of break-ups and urgent trysts, raucous nightlife and a woman in black. My stereo’s tuner dial glowed like magic in the gloomy bedroom. Out in the world people partied, drove fast, and got their hearts broken—I could see it all. This was a world where it was appropriate to scream about rockin’ and never stoppin’. I sang into my pillow and smashed the mattress with my fist.

My family was still lame. My sisters, clad in leotards, twirled and hopped in innocent/lewd imitation of the Solid Gold Dancers. I guffawed in their faces. A rich life lay ahead of me.

Eric Braun is a children's and educational book editor in Minneapolis. He has published a handful of short stories but mostly writes novels centered on 1980s heavy metal that don't get published. He still knows "Juke Box Hero" by heart. And that ending? With the big guitar crescendo? Just wow, still.