The Lion & the Little Boy 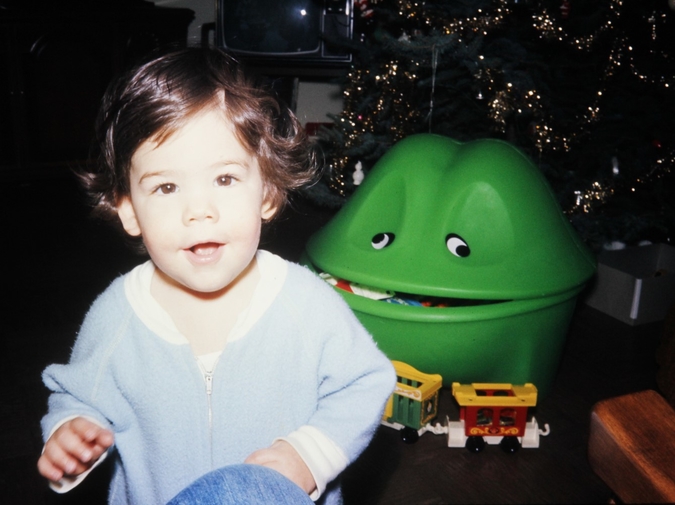 There is a suitcase under my bed that will never not be under my bed. Over the last fifteen years, I’ve moved it from apartment to apartment, state to state. I’ve lugged it through a series of failed relationships and over several mountain passes. It has lain on innumerable floors, both carpet and hardwood, squeezed in between my old wedding dress and record collection. Its provenance makes it impossible to discard, even if it doesn’t exactly spark joy. What it does spark is a sort of bittersweet melancholy, an awareness that whatever we gain or are given in life, we are also guaranteed to lose. That which is carbon-based and beloved will slip away from us. Or we will slip away from it. Meanwhile, impersonal things like suitcases will be left behind to tell our stories.

This suitcase brims with baby clothes. Going through them is like taking a trip back in time: ribbons in the blankets, pompoms on everything. Layers of pajamas and booties and knit hats and tiny socks. Sailor outfits long out of date but perfect and sweet and spotless. Brown corduroy overalls. A collection of bibs covered in rocking horses and colored blocks. Rubber pants for going over cloth diapers when cloth diapers were all you had. A yellow hat with a ruffled chin strap.

My favorite is an impossibly small blue and white sweater with a dog riding a hot air balloon over the pocket. At the very bottom of the pile is a white satin onesie with a shirred collar and two darts in the waist – a little boy’s christening jumper.

It doesn’t look like much, this suitcase. It is an unassuming, greenish brown. Orange stripes of varying widths run up its sides. It reminds me of a brindle-patterned dog. On the front is a black handle losing its leather and two snap locks that sometimes pop open on their own. Inside, it is lined with royal blue satin, a little worse for wear. It smells like the back of your grandmother’s closet. It has that same pungent, dusty odor, that same air of neglect and mystery.

It wasn’t always mine. More I inherited it the year my mother put my childhood home up for sale. During a marathon decluttering session, I found it in the basement pantry, stowed away behind an old Toss Across game and a roasting pan. The moment I opened it, I knew my mother would want it kept safe. I also knew she would never want to see it again.

The night my father called me and my brother, Brian, into the kitchen for a family meeting was muggy and quiet. July in the Midwest. Smell of tigerlilies and mown grass. No breeze to make it bearable and no air conditioning, either, because my father didn’t like to pay for it or close the windows if he didn’t have to.

My father’s calling a family meeting was, in itself, strange. Alarming even. My family didn’t have meetings. We didn’t talk about things. It was 1986. We had dinner together and watched “Cheers” or “*M*A*S*H*” and went to bed.

That night, Dad’s eyes were red and darting. He kept trying to hide them under his hat. My mother was there, too, an angry and reluctant presence at the table, wringing her hands.

So this is it, I thought. My parents are getting divorced. This is how they tell us, in the kitchen with the moths and mosquitoes.

But my dad wasn’t there to talk to us about divorce. Instead, he told us that we’d had a brother who died before we were born. His name was Darren and he was my parents’ second child, coming a few years after their first, my oldest brother, Dean. Darren died when he was only one year old and it was a very sad thing, Dad said, so if we wanted to cry or ask questions, we could.

I didn’t know what to say or think. No questions sprang to mind and no tears came, either. When you’re a ten-year-old girl with two older brothers already, it’s difficult to be sad about the death of a third, especially when said death took place in the ancient and irrelevant history of before you were born. So, I just stared at the table and waited for my parents to stop crying. I wondered idly if this new information would have any impact on my popularity at school and immediately started cooking up a story to tell the pretty girls on the playground. “You’ll never guess. I had this brother, but he died…”

Later, though, I was eaten up with questions, a million of them – What had Darren been like? How did he die? Did his death have something to do with those interminable weeks my mother spent in that weird hospital downtown doing crafts on Sundays? – but I didn’t have the language to ask the questions and I didn’t want to make my sad parents even sadder.

Over the next few years, I grew a little obsessed with the idea of Darren. I was convinced that, unlike my living brothers, Darren would have loved me and treated me kindly and appreciated my worth as a sister and a friend. Had he lived, Darren and I would have played Barbies for hours on end and done each other’s hair and talked long into the night about boys and books and other wonders of the universe.

“Look at those two,” my parents would say, smiling fondly at us. “Joined at the hip. Best friends forever.”

While I entertained such fantasies of perfect brotherly/sisterly love, I also started to wonder if I’d imagined the whole family meeting scene, dreamed up not only a brother but his tragic death, too. If Darren were real, why did no one talk about him after that night at the kitchen table? And why wasn’t there a single family photo to prove that he’d ever been alive in the first place? I searched the house – and my parents’ dresser drawers – for evidence, but I always came up empty-handed.

Finally, I got up the nerve up to ask my oldest brother, Dean, the one who’d known Darren and borne the brunt of my parents’ grief, why Darren was such a close-kept family secret. Dean said it was because of the circumstances surrounding Darren’s death. Darren got very sick very fast. The most likely explanation was the flu, but a few tone-deaf doctors and nurses suggested to my mother that his death might have been her fault. There was a chance, they said, that Darren had had undiagnosed infantile diabetes and that the juice my mother gave him to keep him hydrated had actually killed him.

The guilt was intolerable, Dean said. Mom just can’t talk about him. She can’t think about him. It hurts too much.

As far as I know, the suitcase contains everything Darren ever wore in his short life. They range in size from newborn to twelve months. Nothing – not the jumper, not the sweaters – is bigger than a bread loaf.

On the same day I found the suitcase, I also discovered a trove of photos of Darren. My dad, an amateur photographer and strong believer in the superiority of slide film, kept them in an unlabeled carousel at the back of the pantry, I assume so that on the rare nights we set up the projector to indulge in a family slide show night, my mother wouldn’t be tortured by pictures of the child she’d lost.

Darren was a beautiful baby – dark-haired like my father and brothers, round-cheeked and, it seems, always smiling. In the pictures, my parents and Dean and Darren form a complete unit: a young and happy family just starting out. There’s one picture in particular that takes my breath away. It shows my parents in front of the tree on Christmas morning. My father is holding Dean. My mother is holding Darren. It was obviously shot with a tripod. Darren’s face is cut off. He looks to be about eight months old, maybe ten. In just weeks, their lives will change forever.

The Lion & the Little Boy

My mother mentioned Darren to me only once. I was in college by then. My father had died the previous summer in a midnight fall down our basement stairs. A senseless and sad accident. I blamed myself for his death, but that’s a story for another story.

Obviously sensing that I needed comforting, my mother wrote me a letter explaining how it was that she was able to go on after Darren died, how she managed to keep getting up in the morning, taking care of Dean, how she had the courage to have more have more babies. She’d had a dream about a little boy, beautiful, black-haired, about five or six years old. The boy was sitting in a meadow cuddling a large, friendly lion. The boy in the dream was obviously Darren, she wrote, and the lion his protector. The dream meant that Darren was safe, that he was being well looked after, and that they would be reunited in a peaceful place free of pain and guilt and loss – maybe in that same meadow, maybe with a lion looking on.

My mother and I live in Oregon now. There are no mosquitoes to speak of. We can leave our windows wide open if we want. I have a three-year-old son who has become my mother’s best friend. Before he was born, while I was still pregnant, my mother, in the first stages of dementia, became obsessed with a car accident that never happened. She grew convinced that a little boy, about five or six years old, was killed by a speeding car in front of our house. Hit and run. She still believes that a wooden white cross marks the spot and often tells our relatives back home about the boy’s parents’ efforts to keep it upright and covered in fresh paint. No such cross exists, but sometimes my mother asks me to place flowers in front of it anyway. I humor her, even in winter. It's the least I can do. I pretend to put out flowers, and I hold on to this suitcase full of baby clothes, year after year after year.

Darren’s grave is 2,000 miles away in Indiana. So is my father’s. When my mother dies, she’ll be buried between them.

Deborah E. Kennedy is a native of Fort Wayne, Indiana, and a graduate of the Iowa Writers' Workshop. Her writing has appeared in Salon, Sou'wester, The Hong Kong Review, The Hairpin, and The North American Review. She's worked as a reporter, teacher, and editor, as well as a cookie packer, ice cream scooper, and children's baseball coach. Her debut novel, Tornado Weather, was nominated for an Edgar Allan Poe Best First Novel prize by the Mystery Writers of America, and in 2018 she was named Best Emerging Writer by the Indiana Authors Association.