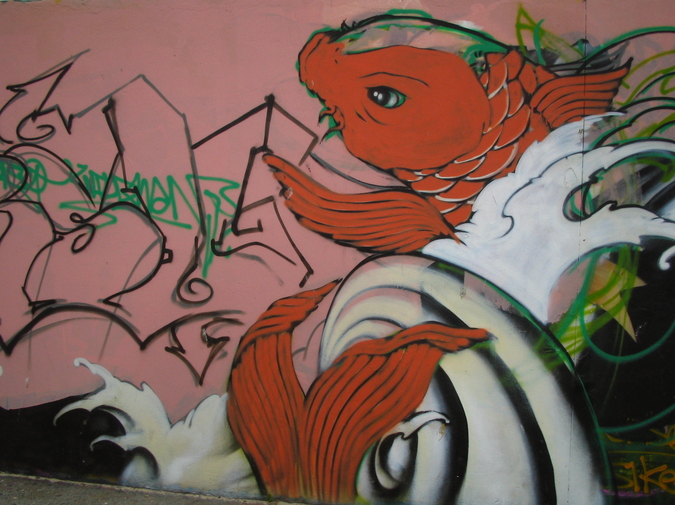 In sandtiger bellies, the young eat the young. You could fit a new-hatched sandtiger pup in your hand, but you shouldn't; they are pink, squishy cartilage, knife-tip teeth, and only the first one survives, chasing siblings down uterine hallways: hide and seek to death. After eating all his brothers, the last one standing sucks yolk like CapriSun from his sharkmom's eggs. By the time the sharkmom gives birth, the pup is the size of a six year old child.

That's why sandtiger wombs come in pairs. Had her babies hatched together, the pups would've rather killed each other than share their mother.

We had suspected that your body wasn't a lifegiver, but it was only after Babygirl was born but not born that you called yourself an all-purpose failure: a failure to propogate, a failure to thrive.

While the cats outside yowled to the sounds of sprinklers and premature cicadas and croaking frogs, and the neighbors, two-headed curtain silhouettes, moaned, I used to wonder how many people were fucking in the mile around our apartment. Now I just wonder how many of them ever sleep.

You left a white noise machine in Babygirl’s room to cover the silence. Our house was made of crashing waves.

Killer whales breed poorly in rounded wall tanks; captive breeding programs are not known for their success, oceanic oh-gods reverberate long after the deed is done; dead calves are picked up with the trash. Their moms follow them to the dump sometimes. Sometimes their dads do too.

Lolita, the oldest orca in captivity, has no calves. After her fourth stillbirth, Lolita floated in her tank. Her trainers stuffed her with Prozac-spiked herring, and her mate sang. Still, Lolita floated.

In the morning, the trainers found her mate dead: he had rammed his head into the tank's mesh gate over and over and over. Lolita nudged him across the saltwater, like she could roll him over and make him breath again, and around the tank, he still sang.

I hate you sometimes. I love you always. But still.

I didn't know we were allowed to take Babygirl home, but the funeral director said we could, after they were done, but only for a week. You carried her close to your belly. You introduced her to the dog. You told me to hold her, so I did.

Maybe it would've been better if her face was some clattering of genetics, if there was some kind of mercy in her. But she looked like you and a little bit like me. Rightly-made, ten fingers and ten toes, and eyelashes, and lips all crimson: cyanotic-aftermath.

There are no cards for this.

The Antarctic paradox refers to phenomena in the Southern Ocean. Despite a macronutrient buffet -- nitrates, phosphates, silicic acids to the rafters -- nothing good can grow. Black water filters out sunlight; phytopankton suffocate in the dark.

I mostly blame her for taking you away from me. At least inside you, she got to drown fast; you just keep on drowning.

Your hair smelled like saltwater when your purse chimed. You showed me the thrashing of blue-silver mussel shells. For Babygirl's mobile. I asked you if we needed to call someone. You asked for an awl.

Betta boy fish build nests without mother in mind. Some work long in advance, thatching saliva-strong bubble ceilings with fern leaves, some spread their fins like psychedelic dreamcoats, loiter in the shoals until a pretty girl betta drops her eggs, and they surface like kaleidoscopic torpedoes, spitting foreplay-nests under lily-pad cover. The architects gurgle, the happy sound of nesting. They swaddle their young in bubble cover and teach their fry good betta values, and the betta babies leave to build betta nests of their own.

To smother: to hold too tightly.

Even after the mussels were strung from the ceiling and the shell-splinters ground to a fine calcium dust at the bottom of your purse, the dollars in your wallet smelled like Red Lobster. But you'd started putting your shoes on top of the bookcase again, out of the dog's reach, and there was hope in that.

On Babygirl’s first unbirthday, I bought you a plane ticket to your parents’. While you were gone, I put the crib and the changing table and the diaper genie on the curb and inflated the air mattress on the guest bed in the never-nursery. Without the everyday reminder, the shut door, I thought that maybe you'd get better. But when you got home, you slept in Babygirl's room instead. I asked you if you wanted company or if you wanted to be alone, and you said yes to both, so I built a nest in her bathtub to sleep in; near you, but not too close.

You turned off the white noise machine. You said the waves kept you from sleeping.

Immortal jellyish are neither young nor old. The ocean is teeming with them, always has been, spread through ballast water. Every ocean, every sea. Currents like windy days turn jellyfish umbrellas inside out and tentacles retreat and in the gellatinous mass, they are children again, and no one ever dies. And the ocean fills, fills, fills.

I told you something had to change, and you said you didn't disagree. So I laid down on the air mattress with you, and you slid down, your feet touching the hardwood floor, flexing your toes. And we slept there together, feet kicking in our sleep, like the raft could finally find its way home.

Caitlin McGuire is the online content editor at Fjords Review, a founding editor at Cartagena, and fiction editor at Yemassee. Her work has appeared or is forthcoming in Whiskeypaper, Booth, and Paper Nautilus. She used to have a fancy website but can't afford it anymore; you can find her at www.caitlinmcguire.tumblr.com.