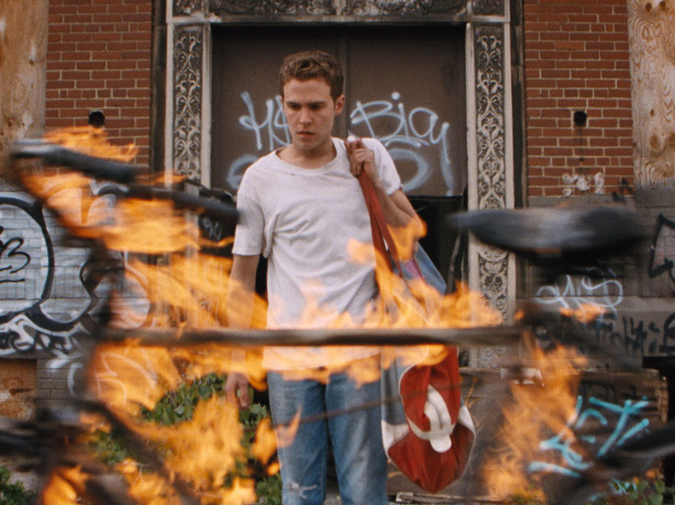 I snuck from a soon whitewashed dire straights portion of Austin still prototyping its gentrification to attend the only traceable South by Southwest experience with regular ticket pricing. Upstream Color, Carruth’s poem-edited sci-fi Citizen Kane of indie cinema at the utter top of its purpose, this magistrate of stalwart Russian-felt engineering and ingenuity, blissed by a multifaceted virtuoso who took his craft artfully beyond, anticipated from a straight up genius opener ten years back, beat Terrence Malick at his own beauty, a task not to be taken lightly or cautioned about anyone else’s effort. The event was in and of itself. The actors were present. They fielded audience questions that came off stupider than God about the meaning of anything. One of the leads, asked why or what the film’s about, nearly and greatly shat into the frat fellow it takes to ask that’s mouth. She shared a quarter of the nervous breakdown necessary to go where she went filming that role. The dumbassery of this long plague of comprehension people tag to any experience in order to destroy it had provoked her enough. But here she is two years later in a film struggling to be that film by a director who has succeeded brilliantly at a very different genre. Dan Brush did the maddest and most exciting segment of The Signal (2007) and will continue being talented if he might perhaps return himself to crazy and avoid poignant beauty, as most should, unless they’re a Carruth maestro. I know the maggot-sized shelf life scurrying under the shadow of one’s superior art folk, but we can learn to be our dangerously violent selves again, Mr. Brush, for no other purpose but to do crimes. Repo Man lives with us. We can fade into our skid marks with more potpourri than at least a few others. Then there’s Lost River, when big money wants to make an art. In my hometown, no less. (Where’s Sizemore shouting: You’re an actor…ACT MOTHERFUCKER!) But, hold on, bravo a minute. Bravo a minute. I thought another actor’s going handheld for false intensity because he studied Herzog like any piece of his excellent silverware, but there’s more to it. Gosling has an understanding beyond the Franco. There’s a certain silence to his pose. I dig his tone, even if he’s sexy. Even Franco did a little better with Child of God. Not just because the shit scene. You want the real art folk for these films, but hey. Fredrick Seidel’s born rich and is untouchably an artist. Not to be too naïve, but maybe in a few years, maybe if someone can somehow, an askew relationship or otherwise, truly break the Gos or Franc – a masterpiece? Look at Keanu Reeves. He went behind the camera and made a tight, solid, sharp, well-edited and damn good Kung Fu flick out of nowhere. Somebody taught that beautiful man about pain. Buzzard, on the other hand, other spiked glove, is a masterpiece about mediocrity, not a mediocrity about masterpieces. It speaks directly to the early-to-mid-eighties born crew of nothings while wearing my favorite t-shirt that I do indeed own. Message received: the best accomplishment we’ll stumble over is to slash some pig’s face with our nostalgia.