The Quandary of The Pointy Objects Annex 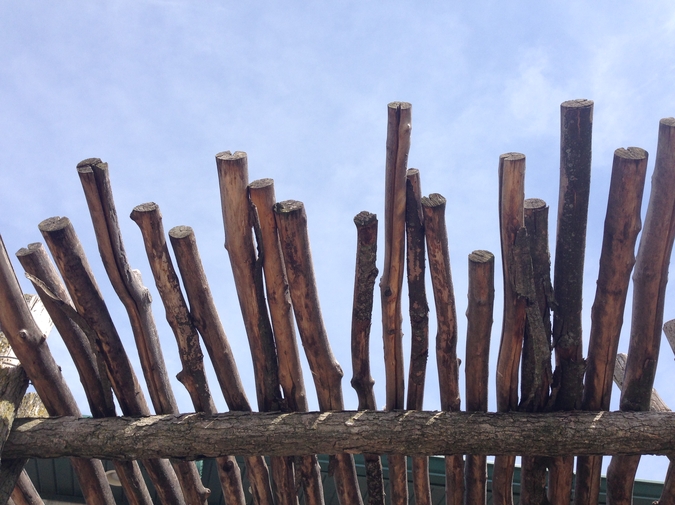 Being, people keep getting poked.  Pricks, punctures, perforations, then the ruptured kidney that was tricky to spin.  Me, faxing the press release: something like, look, Bob was one of those specialists, über-qualified as far as pointy objects go, unprecedented re: blunting methodologies, a loyal friend and employee (the latter fact; I make it a point [sic] to never befriend specialists), but Bob was dealing with pointy objects, he knew the risks down here, he signed the waiver, he is survived by his wife of twelve years, Barb [sic]…

But no matter how talented (Bob: Yale, magna cum laude, his published thesis called, “The Diminishing Authority of The Hypotenuse on a Prong’s Vertex”), specialists are getting hurt.  The SUNY Fredonia study is under review.  During our weekly meeting, a specialist recommends we place rubber conical tips over the pointy objects’ tines/nibs/apexes, which they could remove on the particular objects they were examining, which makes sense but defeats the study’s ambition, being, Why Do We Need Pointy Objects At All?; because we’ve got all these objects in our households already—forks, golf tees, curtain rods, etc. etc. etc.—and you don’t see us going around rubber-nubbing every little pinnacle…

As a student intern, I thought Bob was working with some real progressive ideologies in the Utensils Sector of the Kitchen Branch.  Somehow he cut a flank steak with a spoon’s handle.  The meat thermometer in his kidney ran a perfect 98.6°F.  The specialist that stabbed him, like the other stabbers, only remember up to the moment when they began looking at the pointy objects differently, with what they described as a “longing urgency,” a balloon-like inflating in their brains, a sensation of sovereignty.  These are unprecedented findings, times.  We believe it originates in the thalamus.  This innate incontinence re: infliction.  That pointy objects are the impetus that activates a particular synapsis for cruelty.

Then Dean Nelson (scumbag/pro-pointy objects) comes huffing and puffing and finger-wagging, telling us how dare we spin this to blame pointy objects, that pointy objects aren’t killing specialists, specialists are killing specialists, because what about rope strangulations and pillow smotherings, etc. etc.  We explain, look, fine, point [sic] conceded (although we don’t get into the metaphysicalities that ropes and pillows are not the impetus here but the retort to a sharp tongue or look or tone or exploit), and we hoop-jump, implementing additional psychological assessments during specialist reviews.  But there’s no test for irrationality.  No matter how thorough the intake process becomes, a specialist will always (if the thalamus is milked just so) manipulate a non-pointy-end and direct its pointy-end at a non-consenting, non-pointy object-wielding specialist.  It’s an uphill battle to transition to a lifestyle of blunt objects.  Our bodies even break into points, it’s in our bones.  But we can reduce cruelty by reducing instruments of it, kid-proof it a little.  Because how often do you hear of high schools being attacked with paper towel rolls or post offices overrun with sneakers or innocent bystanders lost to gang violence via drive-by carpet samples?  “Not yet,” Nelson says, “but we’ll find a way.”  (His hypothesis dismisses inciting and favors uninhibiting—that there is an entire neurologic assembly dedicated to the troglodytic desire to always engage in cruel and evil acts; and the chemical inhibitors from our biological evolution, when uninhibited, allow that cruel urge to flow freely).  Though we both agree that carpet samples don’t hold up to katanas.  So we add more pointy objects to the Pointy Objects Annex, rather than rubber conical tips and regulations.  That way specialists have ample opportunity to protect themselves against rogue specialists that slip through intake.  “Regulations only make specialists vulnerable,” Dean Nelson says.

“This one gets an A,” Nelson tells my Director.  “Even though your study’s unAmerican.”

I admit, I’m fighting an itch and urge to steal Dean Nelson’s breast pocket clicky pen and fire it clip-deep into his jugular.  But maybe not because my thalamus is milking just so.  Maybe because he recently uttered a lewd comment to Leah in Registrar, promising to rename a dorm after her.  Everyone’s had a go: janitors, adjuncts, President Murphy, all 5,404 students (minus me), 493 faculty; professing love, willingness to leave spouses, convert religions, etc.  I also feel this competition for her, this need to give give give and take take take.  Gosh, what a nose on that gal.  She doesn’t know my name, couldn’t pick me out of a line up of imbeciles.  But it’s a sort of hunger pang.  If the heart could grumble, consider mine famished.

“My theory,” Dean Nelson concludes, “is we were never not fricking cavemen.”

Though, he was an anthropology PhD, and known to say this often.  Like when the coffee pot wasn’t rinsed or someone didn’t cover their mouth when they sneezed or interrupted him mid-finger-wag.  It’s also not long before Dean Nelson is stabbed through the eye and killed by his secretary who claims never left her desk all day.  Except security footage shows her ogling pencils she was sharpening right before carrying them menacingly into Nelson’s office.  No amount of rug-sweeping will spin this.  The study shuts down and all the pointy objects in the annex are blunted and buried in a pit behind the practice fields.

Cleaning out specialists’ lockers I come across Bob’s.  Taped beneath the shelf is a spoon with its handle filed down to a blade-like edge.  Turns out Bob was fudging data.  Or maybe Bob was just on to something we’re refusing to acknowledge.

I cut a hole in my pocket and tape Bob’s spoon to my thigh.

We’re all quarantined.  Every pointy object on campus is either blunted or fitted with an irremovable conical rubber tip.  We undergo assessments to eliminate the possibility of an epidemic, asked to rate from 1-10 our desire to jab/poke/stab/prod/etc.  I give an honest, “Three and a half.”  Food is delivered in bite-sizes, frogs pre-dissected, trees stumped.  Boxes of dull crayons parachute from the sky.  Men in spacesuits check our spines when we touch our toes.  The spacemen try to bed Leah in Registrar; helicopters pull banners with unoriginal pickup lines.  Nobody succeeds.  To be sure, the quarantine lasts all semester.

Next day, I march into Registrar, find Leah, and ask, “Want to see my pointy object?”

“You sound like Nelson, unR.I.P.,” she groans.  “Know what that creep said?  He said vagina is Latin for scabbard, and he knew of a particularly humble pointy object in need of one.”  She flicks her marigold crayon at me, skidding a sunrise off my forearm.  When I stick my hand in my pants she rolls her eyes and says literally 2,117 people have already tried this.  Except what I whip out is Bob’s spoon and carve my name into her desk.

“Where’d you get that?” she gasps.

“What matters,” I say, “is that I possess the only pointy object in quarantine.  President Murphy doesn’t have so much as a letter opener in defense.  Do you understand what I’m telling you?  Do you know what this spoon makes me?”

“John Remington,” she reads aloud, pupils dilating to the size of pennies.

We do it right there on the floor in front of everyone.  People weep for its ardor, from raging jealousy.  Leah proposes a safe word: Nelson.  I pretend to be a virgin to try and purify the ambition of our boffing, to occupy it forever.  “What’s this called?” I ask.

“Pulchritude,” she says.  “The ugliest of the beautiful.  We epitomize the paradox, don’t we?  Now pierce me again!”  She moans my name, John John John, puts Bob’s spoon between her teeth like a swashbuckler, bites down, muffling, Chot Chot Chot.

I am inspired by the promise of immortality in our joint carpet stain.

I recruit the music department, frustrated that their cello bows and flutes were confiscated and burned/smelted in a large pyre in the quad.  We hogtie the faculty and lock them in the gym.  Leah and I fornicate on President Murphy’s desk, in the library’s special collections room, inside the stadium press box with the loudspeaker on and the student body gathered on the 50-yard line, cheering the sounds of Leah’s biting-down on Bob’s spoon.  The theater department epoxies us regal robes so we can more swiftly engage in coitus (their sewing/knitting/crocheting needles impounded).  They ask what Leah’s robe should look like.  “Something that highlights her nose,” I say.  I assign duties to freshmen/sophomores/juniors/seniors—the bookstore, dining hall, janitorial, mail service, etc., so our parents won’t suspect a thing.  The football team serves as my army; the swim team/water polo club, my navy; communications school, recon.  They all request I use Bob’s spoon to sharpen the hacked tree branches into spears, or whet the ends of wooden spoons in case of an ambush.  “Of course not,” I tell them.

I require mandatory nail clippings and dental exams every other day to prevent tapering.

Anyone caught de-blunting/filing is sentenced to a public flogging.

Dissenters are known by bright oval welts from Bob’s spoon on their thighs and buttocks.

I forge signatures, clear the faculty lounges of booze, the health center of Valium and Vicodin and Oxycodone.  We are adolescent and we are of agony.  We are the epicenters of everything.  Everything is collateral damage.  I have a spoon and I know how to use it.  When a dissenter is flogged they cry, “How could you?”  “Because you’re there,” I say, “and not my epicenter.”  This makes Leah’s thighs drool.  I distribute pharmaceuticals and we swallow them and float around the pool, orgasming.  We illegally download.  We ransack the bookstore, restock it and ransack it again.  We wear our fight colors in unison, as uniform.  Everyone gets As on midterms.  The lacrosse team goes undefeated without lifting a finger, of course.  The glints in our players’ eye whites: unPasteurized thalamus milk.  Amidst lovemaking to Leah, I am quoted as continuously shouting, “There is no cure for my urgency!”  I am fingerpainted on buildings holding Bob’s spoon that emanates its own light (paintbrushes gone).  I am considered to be the most prolific attendee of SUNY Fredonia since B.F. Goodrich.

May, Leah files paperwork in Registrar so my record indicates I dropped out before the quarantine lifts and President Murphy is untied and expels me.  Leah wails and kisses me goodbye.  I kiss her goodbye.  Then I’m off.  The faculty replace all the conical rubber-tipped objects with pointy objects.  Summer term runs as scheduled.

In her last correspondence, Leah tells me of a rumor that a mural of Bob’s spoon still exists somewhere on campus, and students are constantly being judicially referred for returning to Registrar and collapsing over our carpet stain.  President Murphy plans to have hardwood flooring put down during the fall semester.  Leah begs me to come back.  Nelson, Nelson, she writes for entire pages, NELSON.  But amidst the compasses and triangles in the drafting room (she’s an architecture major) and the glittering cutlery and oscillating tools inside The Olive Garden, where I’m now a line cook, we forget all about each other.

Zachary Tyler Vickers is a graduate of the Iowa Writers' Workshop where he was the Provost's Fellow. He's the recipient of the Richard Yates Prize, The Clark Fisher Ansley Prize, and his work has appeared in The American Reader, KGB Bar Lit Journal, Waccamaw, H-NGM-N, and elsewhere. His story, "Karst," has been optioned for feature film. He can be reached via email at ztvick@gmail.com or on twitter: @ztvickers.