The Peculiar Draw of Orange 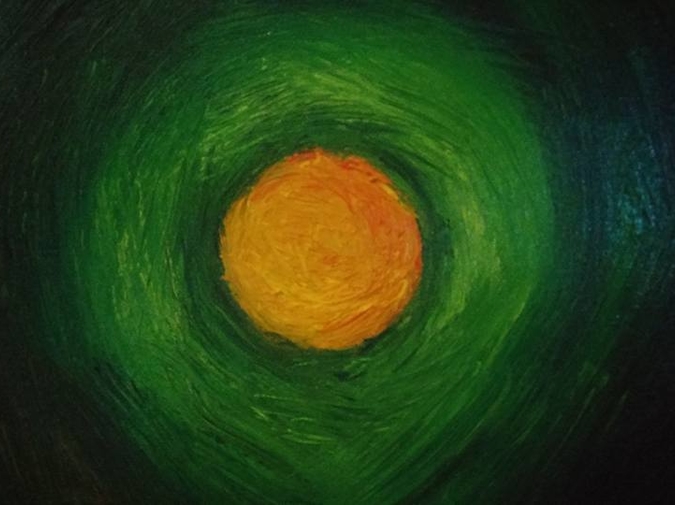 With Regard To Four Necks

Picture, if you could, four necks; four torsos in varying degrees of size and vestimentary rigor; four variously jeaned pairs of legs, and four pairs of white-socked feet. Four hands are patiently sitting on four laps; four butts are slowly becoming damp from friction-sweat due to sitting on four chairs for—thus far—twenty minutes. There are ten minutes to go.

Four small orange lanterns in the grass by our feet have four little orange lights inside, pretending to be candle flames.

With Regard To A Yellow School Bus

There are zero heads. Well, there are four heads of a sort: rather largish paper-mache deals in bright colors meant to resemble, from right to left: a fiery red dragon, a yellow school bus; a green flying saucer; and a brown horse-head. John, Kyle, and Meg are under the dragon, the UFO, and the horse. I’m under the school bus. My paper-mache head is the only one of the four that cannot stay up on its own, so I have to (alternately with my right and left arms) hold it up by the front wheels. The four round wheels don’t spin, and are spherical rather than cylindrical. I’m the only one that knows.

With Regard To Performance Art

It’s twenty minutes in, and my arms hurt. I’m dehydrated. My butt is itchy and my underwear, despite the uncomfortable coolness of the evening and the dewy lawn, is stuck to my cheeks with sweat. I am acutely conscious of periodically violating the imperative stillness of the scene whenever I have to switch arms; which, at this point, I have to do pretty often, because my arms are really beginning to ache. I’m in the beginning stages of a cold. I have to stay as still as humanely possible, because I’m modeling an art-piece.

Without my complete stillness, I will no longer be a statue with a yellow school bus head, but an unfortunate volunteer at an art-instillation festival on a beautiful lawn behind a stunning historic hotel in Winslow, Arizona, all which I can’t see because my head is stuck inside of a school bus.

My head feels like the orange crème blobby core in a big chocolate.

With Regard To A Head Cold

I have an awful heat in my throat from the cold I’m getting. The lantern light shining through the thick layers of yellow paper mache becomes orange. Everything is orange. I need an orange. I desperately need an orange. Every goose bump on my freezing arms cries out for citrus. My dry tongue, my virus-soggy throat, my sweaty underwear: every inch of my being wants an orange. I ball up my hands and pretend that they’re oranges growing right out of my wrists. I lick my lips, but it hurts because my tongue and my lips are dry.

With Regard To A Turquoise Piano

We are freed. After the final idly rich stragglers have strolled by (the last one poked me, asking his buddy if I was real) the volunteer organizer guy let us put our shoes back on and go inside to warm up.

I search high and low for an orange. For oranges. I want more than one orange. One I can eat really quick, and one I can savor. Actually, three oranges: the one to scarf, the one to savor, and one to keep for later.

Everyone is outside on the lawn watching Jackson Browne and waiting patiently for him to sing the one about standing on the corner in Winslow. A languid middle-aged cheer wafts in through the open windows as Mr. Browne gives the people what they want.

The hotel is huge. I wander the corridors, trying to re-find the kitchen where we ate a free volunteer dinner hours earlier and where I think I remember seeing a fruit-basket behind the spaghetti troughs. I turn a corner and find myself not in the kitchen but in a colossal room with a chess set of life-sized pieces. Enormous couches. Colossal plants next to huge windows. All is way big, like some sort of Jurassic-era lounge where everything is mega.

In the far corner is a turquoise piano. A huge grand one.  The big flappy part over the body is closed and on top of it is a class bowl of spheres. I stumble forward. I knock over a rook as big as I am, climb over a couch, cough a bit in a final grateful admission that I do in fact have a cold, and reach the turquoise piano.

Inside the glass bowl are four or five vaguely fruit-sized ornaments of marbled glass.

With Regard To A Long Drive Home

John’s hands are on the wheel, very still, and he’s looking straight ahead at the dark yellow lines of Route 66. Meg is the front seat. Kyle and I are in the back seat. I wonder if Kyle’s underwear has dried yet, because mine hasn’t. I hope nobody knows that I have a cold, and that by the end of the drive they almost certainly will too. I pray that I don’t cough. I ball my fists up and pretend they’re oranges growing out of my wrists.

“Does anyone want a vitamin-C candy? I’m just finally getting over a cold and I have a bunch left over. They’re pretty good.” Meg sneezes. I feel a snot-mist settle on my forehead and stick there, clammy and slimy. I unball my fists.

Eric Dovigi lives in Flagstaff, Arizona, and is pursuing an MFA in creative writing from Northern Arizona University. His work can be found in Blue Planet Journal, Westwind Journal, the Universidad de Madrid's JACLR, and elsewhere.